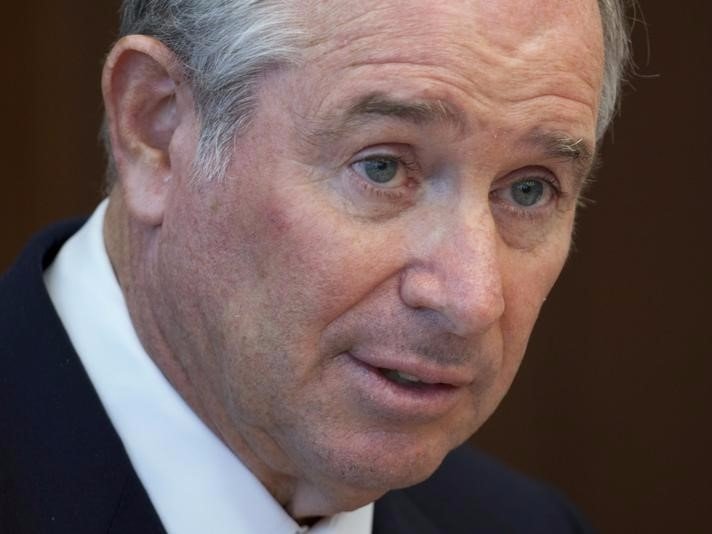 Thomson ReutersSteve Schwarzman, Chairman, CEO and Co-Founder of the Blackstone Group, speaks during a news conference in Hong Kong

CREDIT SUISSE: Markets will be lousy for the next decade, and it is a disaster for savers

The smart money is getting warmed up.

Private-equity firms and distressed-debt specialists spy an opportunity amid the market carnage of the past few weeks, and large funds are ramping up investment.

It’s a change for the industry, which spent the last few years struggling to find deals as valuations soared. Instead the funds seized the opportunity to sell-off older investments and raised new capital.

“We’re buying when things get tough — we’re buying low and selling high,” Apollo cofounder Josh Harris said on a conference call this month. “We sold when the markets were high, now that the markets are low, we’re slowing down our selling and doing a lot of buying.”

Apollo has $26 billion in undeployed capital to invest, according to Credit Suisse, and it’s not alone.

Siegenthaler and his team expect Apollo and others to focus on investing in debt, and in the energy sector — both places where investors have been panic selling lately.

Apollo’s average capital deployment jumped from the $2 billion to $3 billion range in the first half of last year to $4.1 billion in the final three months of the year. According to cofounder Leon Black, that could be just the beginning.

At very high points of the market it can dip in into the two’s and during the financial crisis it was eight. And so if, I’m not saying this should be a financial crisis, but if this environment slowdown continues in the financing markets, our deployment will over time directionally be heading up and that will be a good thing for us.

Apollo, which on Tuesday announced a nearly $7 billion deal for home-security firm ADT, isn’t the only firm looking to put money to work.

Steve Schwarzman, chief executive of The Blackstone Group, said on the company’s earnings call that the firm was seeing strong demand for credit-investment strategies as high-yield spreads spike. And Howard Marks, cochairman at Oaktree Capital Management, said that there are “more interesting debt opportunities” available than at any time in the last five years. Still, the firm is going to be patient. He said:

Billions of dollars in investment grade energy and metals and mining debt could be downgraded to high-yield status if commodity prices remain depressed. With the record amount of dry powder and our ability to add value in distressed assets across multiple strategies, including control investing, real estate, strategic credit and of course most prominently the Opps Funds, we are more optimistic about the ability to find attractive investments than we have been for several years.

Risk aversion is back after a five-year hiatus and a burgeoning supply of distressed opportunities is on the horizon. What started as a largely oil and gas focused dislocation has generalized into weakness across nearly every commodity sub-segment. And weakness is starting to bleed into other segments of the bond market, including media and retail.

While more interesting debt opportunities are on our plate now than at any point in the last five years, we plan to be patient and wait for a pickup in default rates before becoming materially more aggressive in investing our capital.

NOW WATCH: Donald Trump was one of the first to be ‘too big to fail’