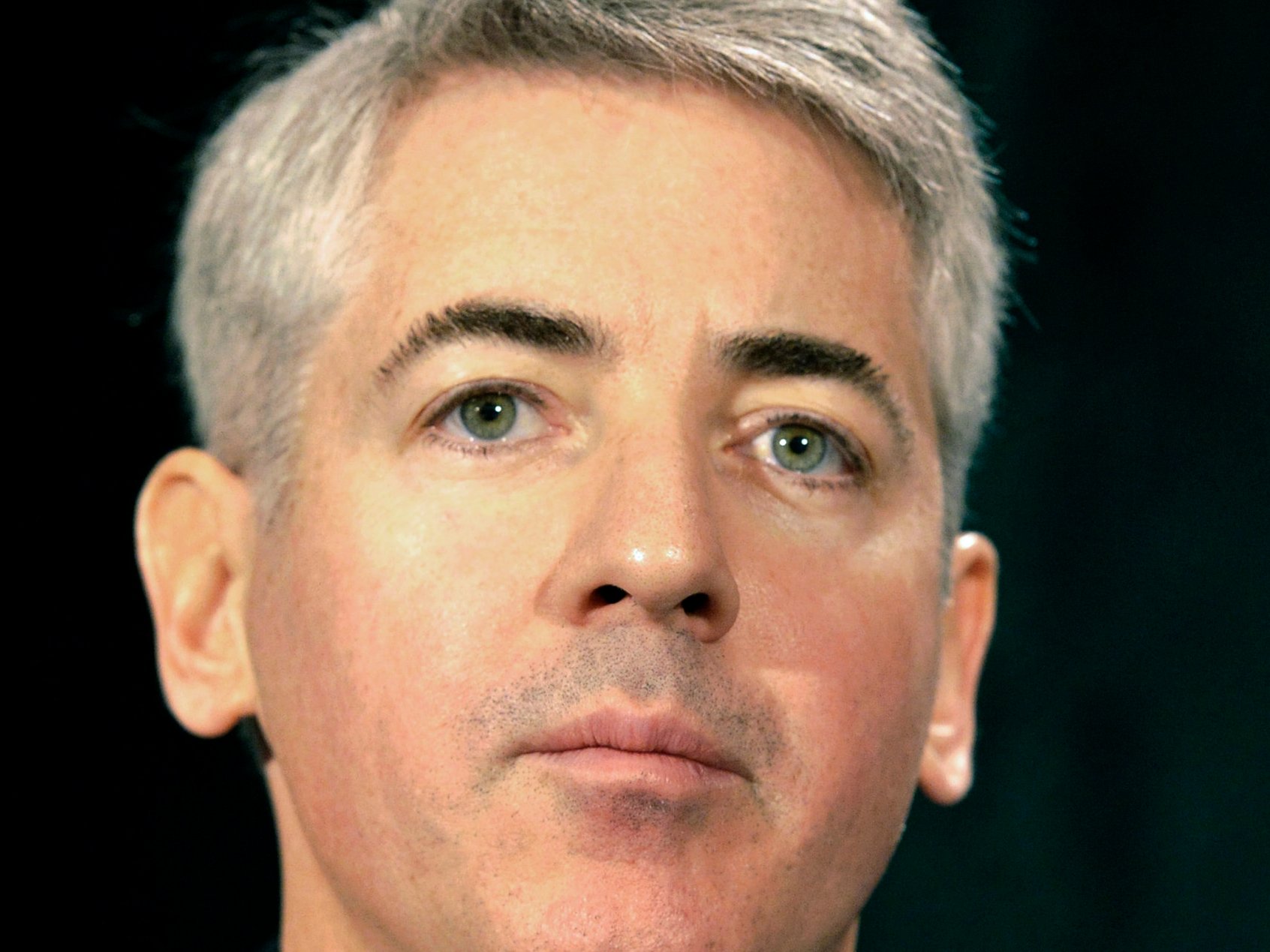 Wall Street already has a trade of the year

Hedge fund managers have been in a ‘race to the bottom’

I’ve heard a lot of stories about investors losing money in my time covering Wall Street.

By far the most fascinating people to observe losing money — also the hardest to watch — are super-rich investors.

The fascinating part of watching this rarefied group is not the scale of losses, nor is it the spillover to the rest of the investment industry.

It is that when real “Master of the Universe”-types lose money, you find out that money doesn’t really matter to them at all.

There’s one thing that is far more important.

And that is why 2015 was so painful for many hedge fund titans. Losses are bad, but having all your peers, all of the financial media, and your entire town know you were wrong is worse.

All of that was on florid display last week, when billionaire investor Bill Ackman wrote a year-end investor letter that included a candid revelation of a personal, inner struggle to be right.

“We do not believe that our investment performance in 2015 was primarily due to unforced errors, but rather due mostly to the market’s reappraisal of our holdings without a corresponding material diminution in their intrinsic value,” he wrote.

In other words, the market is acting irrationally and I’m still right.

In the same breath that Ackman acknowledged making mistakes, he defended several of them. Yes, he made a few, but some of them were unavoidable because of restrictions on selling stock, and still, he said, the mistakes weren’t the biggest driver of his fund’s poor performance.

In fact, the biggest losses were partially the result of something out of his control, something he acknowledges earlier in the letter he could not foresee (emphasis added):

The companies in our portfolio that have suffered the largest peak-to-trough declines are Valeant, Platform, Nomad, and Fannie and Freddie. The inherent relative risk of their underlying businesses and their more leveraged capital structures partially explain their greater declines in market value as markets moved to a “risk off” mentality.

But their massive declines in value, in our view substantially more than can be accounted for due to fundamental issues in their respective businesses, cannot, we believe, be attributed to these factors. Importantly, none of these companies is in any of the important market indexes. Their shareholder bases are, therefore, largely comprised of hedge funds and other active managers, which we believe has contributed to their underperformance.

Not his fault, guys.

In the cheap seats you can’t afford

But this rule of being right doesn’t go for everyone in the business of finance. That’s because others have actual financial pain to bear when a downturn hits.

In some cases, it’s because they have been outspending their paychecks, anticipating that their earnings might catch up or just because they had a break with reality. Money slips through their fingers like sand, and when they run out of it, it’s as if they’ve come out of a deep hypnosis. They look around, and they don’t even know how they got to where they’re standing.

Others aren’t quite so extravagant but still live life bonus check to bonus check. When one of those checks comes in light, or not at all, they have to choose between the second home or private school for the kids next year. YouTube / Margin Call trailerIf you haven’t seen the movie “Margin Call,” do it. The firing in the beginning is pitch perfect.

Their meltdowns can be witnessed in any quasi-private space at a Wall Street firm — a conference room, a boss’ office, the bar downstairs — grown men freaking out about what they’re going to tell their wives.

The Masters of the Universe are different. They will never have to worry about private-school fees. They would struggle to blow their billions even if they tried.

For them, the money isn’t the goal. It’s just a way of keeping score.

“In general it’s about being right or being smart — being smart more importantly because anyone can be right once,” said Denise Shull of The Rethink Group, a trading therapist who has worked with some of the highest-profile people on Wall Street.

And also in terms of reactions, she said, “it really runs the gamut.”

There are Masters of the Universe who can quietly lose money years running and you’d never know it. These are the guys with white knuckles and calm faces. Ask the drivers who drive them, the nannies who take care of their children, the maitre d’s who serve them — none of those people would be able to tell you that something is amiss.

But every now and then the veneer will slip. This usually comes in the form of quick, vicious self-flagellation — something along the lines of, “Of course I wasn’t invited to XYZ — I’m not a winner anymore.”

This negativity is gone from their demeanor as suddenly as it came. Don’t ask them about it afterward, either, because this kind of trader is a black box.

Therapy, though, is not always considered. The thought is: “What’s the point? There’s really nowhere I can go to escape this.”

Remember, after all, that the nannies and the drivers, the analysts and the managing directors, the caddies at the club and the fund-raisers at charities — they all exist in an ecosystem that is in some part dependent on this one Master of the Universe’s ideas being right.

“A lot of these guys do feel a real sense of responsibility,” Shull said.

This is why there’s a therapist in the Showtime show “Billions” who listens to hedge fund superstars cry on her couch. There is deep emotion in all this. In fact, the entire idea of taking emotion out of your trading is nonsense, Shull said. Humans can’t even make a decision about when to go to the store without some emotion.

“In the hedge fund world we call it conviction,” she said.

Conviction is the deep-seated knowledge that you are right, which means that knowing you are right is emotional. That’s opposite of what you were taught during your first summer internship at Morgan Stanley, when vets tell you you’re supposed to trade unemotionally.

The key instead is to maintain a keen awareness of the awesome, emotional power of your desire to be right. Even Masters of the Universe must surrender to this. If they don’t, Shull says, and the Master tries to ignore where this “conviction” is really coming from, its grip over the mind becomes even more powerful.

Yahoo FinanceThe past six months in Valeant Pharmaceuticals, Ackman’s biggest loser and biggest position in 2015. He’s staying in it.

This is a test. Some hedge fund managers get through it; others don’t. They shut down their funds, and then they write letters to their investors that sound like this one from the defunct London-based hedge fund Nevsky Capital (emphasis added):

In summary, all of the above factors now mean that it is more difficult than ever before for us to accurately forecast macroeconomic and corporate variables. This pushes up our cost of capital and substantially increases the risk of us suffering substantial capital loss on individual positions either because of a forecast error or simply because we could be caught up in an erroneous market trend, which could then persist for far longer than we could take the pain. This has made what we enjoy most — the thrill of analyzing economic data releases and company accounts — no longer enjoyable.

You get the point — the market has changed, and it’s no longer something we can master. It isn’t fun anymore. We could be wrong, and we don’t want to be wrong.

If you want to survive, then the question is do you change your portfolio, or do you double down on your ideas, white knuckling until you can convince the market you’re right with sheer will?

We know what Ackman has chosen.

“While it is impossible to know for sure, we believe that our continued negative out performance in the first few weeks of the year relates primarily to forced selling of our holdings by investors whose stakes overlap with our own,” Ackman wrote in his letter.

He continued: “We are unlikely to make wholesale changes to the current portfolio as we find the valuations of our holdings extremely attractive.”

In other words, investors who lack our conviction are selling, or perhaps being forced to sell. We, however, will not. This thing will turn around, our investors will make money.

And the world knows we were right in the end.

NOW WATCH: This airline lost a bunch of its passengers