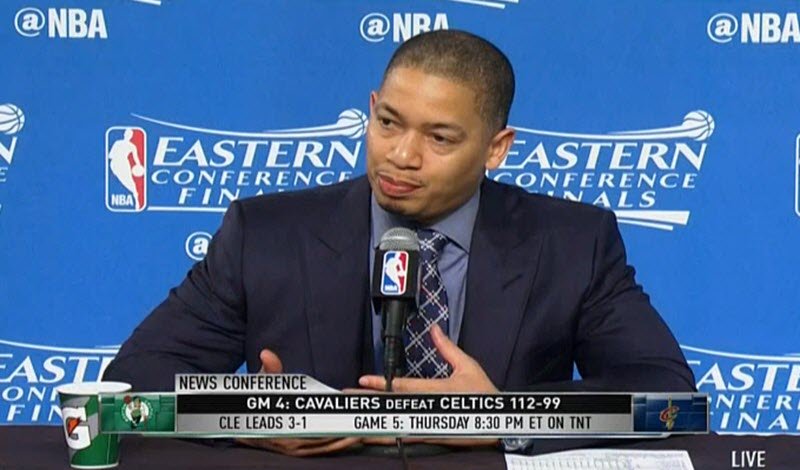 The Cleveland Cavaliers bounced back from their ugly Game 3 loss to win Game 4 handedly and take a 3-1 lead over the Boston Celtics in the Eastern Conference Finals.

The win was huge for the Cavs, but maybe even bigger for LeBron James who had a disastrous Game 3. Not only did he score just 11 points, including none in the fourth quarter, but things got worse after the game when he had a confrontation with a fan and took a shot at a Cleveland radio host for only asking questions after the Cavs lose.

It was the latter that head coach Tyronn Lue had fun with following the Cavs’ Game 4 win on Tuesday.

When Lue was asked a question from the same reporter, Kenny Roda of WHBC radio in Cleveland, Lue sarcastically responded by asking Roda why he only shows up when the Cavs lose.

Some felt Lue was taking a shot LeBron’s mini-meltdown. More likely, Lue was trying to diffuse any tension with a member of the local Cleveland media, something that could have spiraled into an uglier situation.

After Game 3, LeBron was not having as much fun.

“It seems like you only ask questions when we lose,” James said. “It’s a weird thing with you, Kenny. You always come around when we lose, I swear.”

Here is the original confrontation between James and Roda.

LeBron: “You always come around when we lose, I swear.”