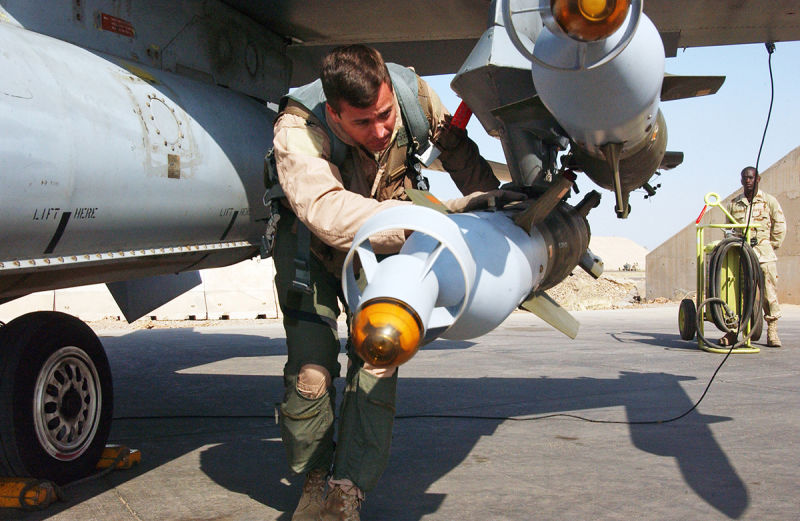 There is a lot of political talk right now about the U.S. carrying the weight militarily for its allies, including NATO. One actual example of this is the recurring situation where, even in lower-intensity conflicts, our allies run out of guided air-to-ground munitions to drop on the enemy. Well, it has happening once again over Iraq and Syria, and the U.S. has stepped in like always as the big bomb and missile sugar daddy. But are even U.S. stockpiles up to the Pentagon’s strategic demands?

There can be no doubt that modern air wars cannot be fought on the cheap—well, unless you’re Russia. It is not just a tactical red flag, but a strategic one that even our wealthiest allies don’t have enough precision-guided munitions to sustain even their relatively small aerial contributions to the anti-ISIS air war.

The same thing happened in Libya five years ago, with the U.S. eventually stepping in and providing bombs and missiles for use by foreign jets. Apparently the lesson was not learned then, as the Pentagon has once again had to open its bunkers to provide weapons from its own stockpiles for allied aircraft to use in an attempt to keep the fledgling coalition air war moving. It isn’t even clear if the U.S. gets reimbursed in full monetarily for these “borrowed” bombs.

With the already huge demand for air-to-ground weapons by western nations only increasing, business is booming for suppliers. Defensenews.com reports that Lockheed is upping production of AGM-114 Hellfire missiles from 500 to 650 missiles a month and quadrupling its capacity to build the Paveway series of laser guided bombs.

Since the start of the air war, the U.S. alone has dropped over 40,000 weapons on ISIS targets. These munitions cost some $1.5 billion. This equates to roughly $37,500 per weapon dropped. What’s a bit disturbing about that number is that the total estimate force size of all of ISIS in Iraq and Syria topped out at about 32,000 fighters, according to U.S. officials. If you were to take the total cost of bombs dropped and divide it by the high-end estimates of ISIS’s actual size, that would equal about $47,000 per fighter. The real question is could we have used this money differently to take down the Islamic State. Spending $47,000 a head is a very big number, especially in that part of the world. Keep in mind, this is just the munitions’ unit cost—the price to get them on target is much, much larger. For instance, a B-1’s cost per flight hour is nearly $60,000. An F-16, about $23,000 per hour.

There is also the question of what exactly are we hitting if we are not killing ISIS en masse? Far more bombs have been dropped than the highest estimates of ISIS’s total force size. Sure, vacated material like trucks and such add up, but still, that is a lot of bombs for not a lot of enemy dead. The fact is that ground-based forward air controllers are not a major part of this campaign, which degrades the effectiveness of the overall air war greatly. This out-of-whack metric may be a glaring indicator of this well-known and controversial reality.

Because of the glacial pace of the White House’s anti-ISIS strategy, even though the Pentagon thinks it has killed 20,000 ISIS fighters, the group’s total size remains largely the same as it was many months ago. In other words, they are requiting fast enough to largely replace lost fighters, and/or the Pentagon’s estimates are way over-blown. Either way, it’s not good news.

“We’re in the business of killing terrorists and business is good. We need to replenish our munitions stock. Weapons take years to produce from the day the contract is assigned until they roll off the production line.”

This replenishment, at least a partial one, is happening through a $1.8 billion weapons buy that will order 45,000 new bombs and missiles as part of a larger $7.5 billion budget to fight ISIS. Yet, is this enough? You can have the best fighter aircraft in the world, but if you do not have precision-guided munitions to use with them, their effectiveness drops drastically. In many cases, they become largely useless.

What if a larger conflict erupted versus a near peer-state opponent? One where the target list has tens of thousands of coordinates on it? If bombing ISIS wipes out our allies weapons stocks and puts big pressure on the Pentagon’s, then there is a huge hole in the west’s ability to fight a major protracted conflict against a serious foe. The idea that an $100 million-plus F-35 could fly deep into enemy territory just to sling a dumb bomb at a target would be laughable if it weren’t so concerning.

Making the problem much more serious is that it takes long periods of time to build a single smart weapon, with long-lead items needed to be ordered well in advance of assembly in order to keep production humming along. In other words, the production of smart weapons is fairly inelastic. The more complex the weapon, like cruise missiles, the longer the production lead time required.

With all this in mind, it seems like it is high time that America’s smart weapons stockpiling and production strategy need to be deeply reevaluated. It seems as if this essential military capability is grossly underfunded, especially when all our aircraft and tactics are dependent on smart weapons capabilities. It also seems like the platforms versus munitions is out of scale, with more focus on developing and building an inventory of very high-end delivery systems instead of the the munitions themselves.

Drastically increasing the par numbers for basic guided air-to-ground conventional weapons, such as Hellfire anti-tank missiles, 500, 1,000 and 2,000lb GPS guided Joint Direct Attack Munitions and Paveway laser-guided bomb kits, seems like an essential requirement. These weapons offer basic precision air-to-ground capability, have long shelf lives and are carried by a many platforms. Just these three types of air to ground weapons cover a huge group of potential target sets. Other more specialized munitions could be bought in a more sporadic manner.

As for our allies—well, at least when it comes to NATO—an initiative to keep a much larger stockpile of air-to-ground munitions on hand is absolutely needed. Pooling inventory among NATO nations may make some sense as well, but a much greater investment needs to be made regardless of the distribution concept. The U.S. should demand that the issue be addressed as it is just one more major indicator of how some of America’s allies really need to be investing more heavily in their own defense.