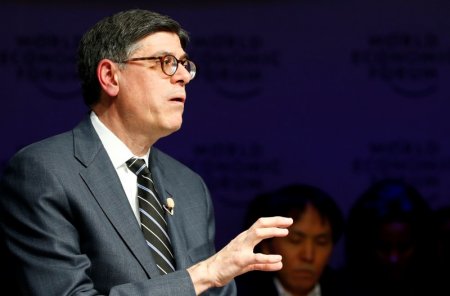 Thomson ReutersLew, U.S. Secretary of the Treasury, speaks during the session ‘Global Financial Priorities for 2016’ at the annual meeting of the World Economic Forum (WEF) in Davos

WASHINGTON (Reuters) – U.S. Treasury Secretary Jack Lew reiterated to China the importance of transitioning to a market-determined exchange rate in an orderly and transparent way, the Treasury said on Wednesday.

During a phone call with Chinese Vice Premier Wang Yang on Tuesday evening, Lew also urged Beijing to clearly communicate its exchange rate policies and actions to financial markets, the Treasury said in a statement.

Wang said in the call that China remained capable of keeping the exchange rate of China’s currency, the renminbi, “basically stable at a reasonable and balanced level”, the official Xinhua news agency reported late on Wednesday.

Xinhua added Wang and Lew also discussed how to push forward a bilateral investment treaty, under discussion for much of last year, to help improve business ties between the two countries.