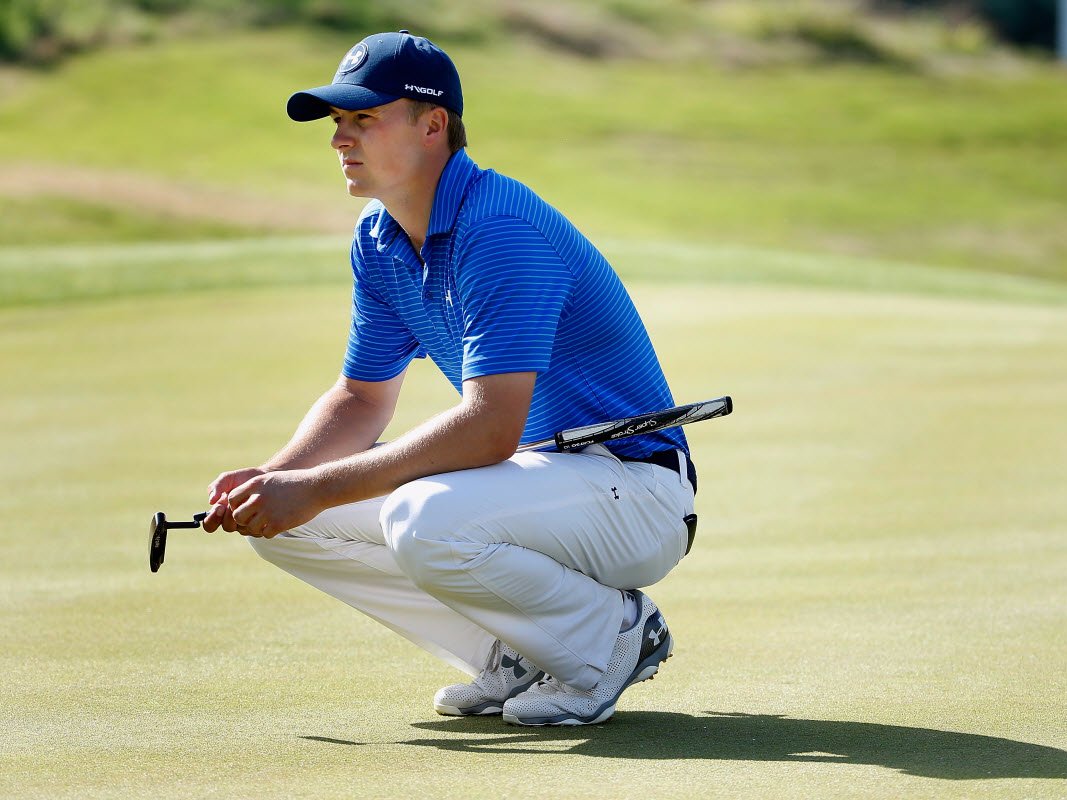 Christian Petersen/Getty ImagesJordan Spieth is decked out head-to-toe in Under Armour.

Under Armour made another splash in the golf world when they introduced their first line of golf shoes this week at an event leading up to the WGC-Dell Match Play in Austin, Texas. For the rising sports apparel and footwear company, it may be their boldest move yet, but it is one they are approaching with a careful and calculated approach that may help them succeed where Nike has not.

Ryan Kuehl, Under Armour’s vice president for sports marketing and sponsorships, explained in an interview with Business Insider how they are trying to win over the golf consumer and it is brilliantly simplistic.

Of the major sports, golf may be the most difficult for a new brand to become established. It is a sport where both the athletes and the consumers are intensely loyal to long-established golf brands, something Nike learned the hard way. Despite being the world’s biggest sports shoe and apparel company, and despite having Tiger Woods as a spokesperson, Nike still lags behind several other traditional golf brands.

Under Armour’s strategy is clearly different than the tactic used by Nike in the early 2000s when they launched a full-fledged assault on the golf world, not only with apparel and shoes and trendy commercials, but also with golf equipment like clubs and balls.

Unlike Nike, Under Armour is in no hurry to start making golf equipment.

“I wouldn’t say [making golf equipment] is out of the question, but it is not anytime soon,” said Kuehl. “We are very happy with where our product portfolio is right now.”

This is a point Under Armour cleverly emphasized in their first commercial for Jordan Spieth’s new shoes. The very first thing seen in the commercial is a golf ball, with a Titleist logo front and center. Instead of moving into the neighborhood and building up a big wall to block the neighbors, Under Armour knocked on their door and offered a plate of warm cookies.

While Under Armour strives to be accepted as a golf brand, they still have some huge advantages over other golf apparel companies. One of the biggest is the one thing that made Under Armour famous, apparel technology.

“Under Armour is ahead of Nike in terms of how they are integrating technology into their proposition,” Neil Saunders, CEO of consulting firm Conlumino, wrote in an email to Business Insider.

This is important because Under Armour can be taken seriously when they sell golf as a sport instead of a pastime. Portraying golfers as athletes is something that will likely resonate better with younger consumers, the same consumers that have been moving away from golf in recent years.

Under Armour’s other huge advantage — a younger core

This is also an area where Under Armour’s beginnings are a big advantage. The same kids who were wearing Under Armour apparel as high school athletes in the mid-2000s are now young professionals looking for other ways to be athletic.

“That kid who first knew us at 15 or 16 playing high school sports, you go forward 10-12 years, now they are out of college, they’re starting a career, and they still know our brand,” Kuehl said. “So they are very comfortable taking our brand and wearing it on a golf course.”

At the same time, Under Armour’s attempt to become part of the golf world and still stand out without scaring the traditionalists can be seen in the simplicity of the products they are producing, eschewing bright colors, oversized logos, and splashy designs seen on products produced by Nike and Puma. Getty ImagesUnder Armour’s apparel is instantly recognizable on the golf course, even without the neon colors.

Under Armour is starting at the bottom, literally.

That Under Armour is making a big leap into golf through footwear is no surprise. The company is taking aim at Nike and sees the rise to the top as starting from the bottom, as Adrienne Lofton, Under Armour’s Senior Vice President of Global Marketing, recently explained to Business Insider.

If Under Armour is going to succeed in footwear, that means taking on Nike. Emmett Knowlton/Business InsiderA message printed above a mirror in the weight room at Under Armour’s campus in Maryland. Nike’s headquarters are in Beaverton, Oregon.

For now, being the biggest brand in golf is probably not important to Under Armour. Rather, Kevin Plank, the CEO and founder of Under Armour, would probably just be happy if Under Armour grows bigger in golf than Nike and accepted among the traditional brands.

So far, they are off to a good start.

Here is the full commercial for Under Armour’s new shoes.