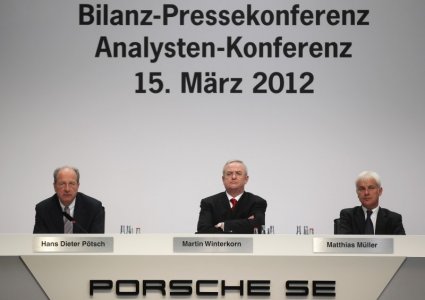 BERLIN (Reuters) – Volkswagen AG’s current chairman and chief executive were alerted by the carmaker’s former CEO to the use of illicit emissions-control software in the United States two weeks before the carmaker disclosed the scale of its manipulations, Bild am Sonntag reported, without citing the source of the information.

Martin Winterkorn, who resigned within a week of Volkswagen’s (VW) biggest-ever corporate scandal becoming public on Sept. 18, briefed VW’s executive board on Sept. 8 that the carmaker had admitted the use of “defeat devices” to U.S. authorities, the newspaper said.

Participants in the Sept. 8 meeting included then-finance chief Hans Dieter Poetsch and then-CEO of Porsche, Matthias Mueller, according to Bild am Sonntag. They have since taken the positions of VW chairman and chief executive, respectively.

Former CFO Poetsch has been criticized by some investors and analysts for failing to inform VW’s shareholders of the looming problem, with some of them demanding that VW select an independent chairman if it wants to overcome the crisis.

“Volkswagen is convinced to have fully complied with the requirements set out in the securities law,” a spokesman said in an emailed response late on Saturday. “Volkswagen categorically declines comment on contents of management board meetings.”

VW’s own acknowledgement of the manipulations on Sept. 20 subsequently erased billions of euros from the company’s market value, forced Winterkorn’s resignation and sparked investigations and lawsuits across the world.

The carmaker defended its course on March 2, saying it had not failed in its duties because it had no idea until the U.S. Environmental Protection Agency released its statement on Sept. 18 how expensive the affair could become.

Europe’s largest automaker has pledged to publish results of an investigation into the scandal in the second half of April. The probe is led by U.S. law firm Jones Day.