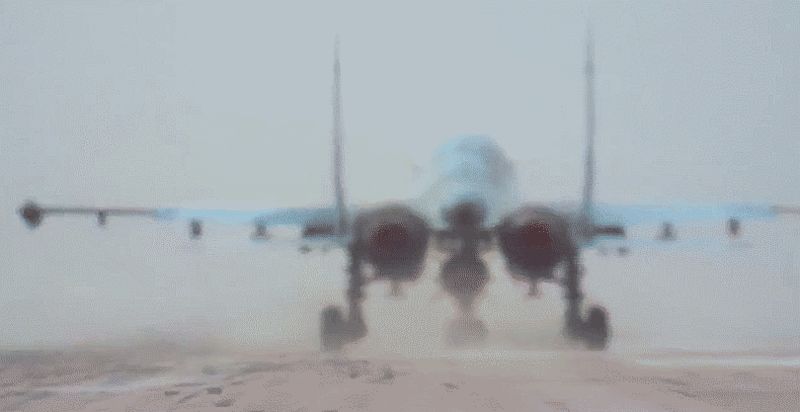 When Russian President Vladimir Putin ordered the vast majority of Russian combat capability out of Syria, not many realized it would begin en masse nearly that instant. Today, the Kremlin plastered social media with dramatic images and video of its aircraft streaming out of their Syrian outpost south of Latakia, and arriving back at their bases within Russia’s own borders.

In what seems at face value as a stunning turn of events, Russian President Vladimir Putin has… Read more Read more

The first of the tactical aircraft to leave the base were Su-34 Fullbacks, led by a single Tu-154.

Other images show An-124 Condor and IL-76 transports streaming out of the Syrian base. Russia says that it plans on keeping the base as its own, just as it retained a strategic Mediterranean port in Tartus, Syria. This was likely part of the deal that the Assad regime offered Russia in order to intervene militarily in the Syrian civil war, one that that Assad was losing before Russian forces showed up.

As for what type of Russian forces will stay behind remains to be seen. Although the Russians will supposedly leave their S-400 air defense system intact to the chagrin of the US led anti-ISIS coalition, a force of about 1,000 is said to be part of the residual force at both Russia’s naval base and airfield outpost. There is also the question of whether Russia will keep a small contingent of attack aircraft and helicopters just in case the current ceasefire falls apart.

Although Russia has accomplished some clear goals by its excursion into Syria, this rapid exit also underlines something that the Kremlin has denied since its bombing missions begun: that they were never really interested in going after ISIS.

The reality is that Russia just labeled anyone with an AK-47 and a distaste for the Assad regime as “ISIS.” This truth has long been supported by the fact that very few Russian air strikes were actually focused on ISIS which has little presence in the country’s western region. Anti-assad rebels, on the other hand, do have a presence there.

Now, Russia is calling it “mission accomplished” and leaving Syria with ISIS still very much intact. This set of actions actions underline once again that ISIS had really nothing to do with Russia’s mission in Syria. This murky way of identifying the enemy, and doing so to match the propaganda goals of the mission, is right out of the hybrid warfare playbook that Moscow continues to write.