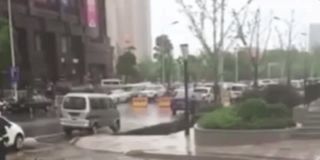 Whoops. This parked minivan may look like it’s on an unexpected adventure to the Land of the Lost, but it unfortunately wasn’t actually going on a fun romp with dinosaurs. It was being consumed by a giant sinkhole in China.

The sinkhole opened up along a road in the city of Nantong, the Daily Mail reports, and it continued to expand before taking a large tree under. Chunks of pavement fell in, while an underground water pipe exploded.

The province had apparently been hit with downpours in recent days, a potential source for the sinkhole, the Daily Mail reports. No injuries were reported. Hopefully, Nantong will recover from this collapse as quickly as the city of Fukuoka, Japan. In 2016, a huge hole opened up under a major freeway in Fukuoka. It was repaired just a week later.

We’ve Got A Sinking Feeling