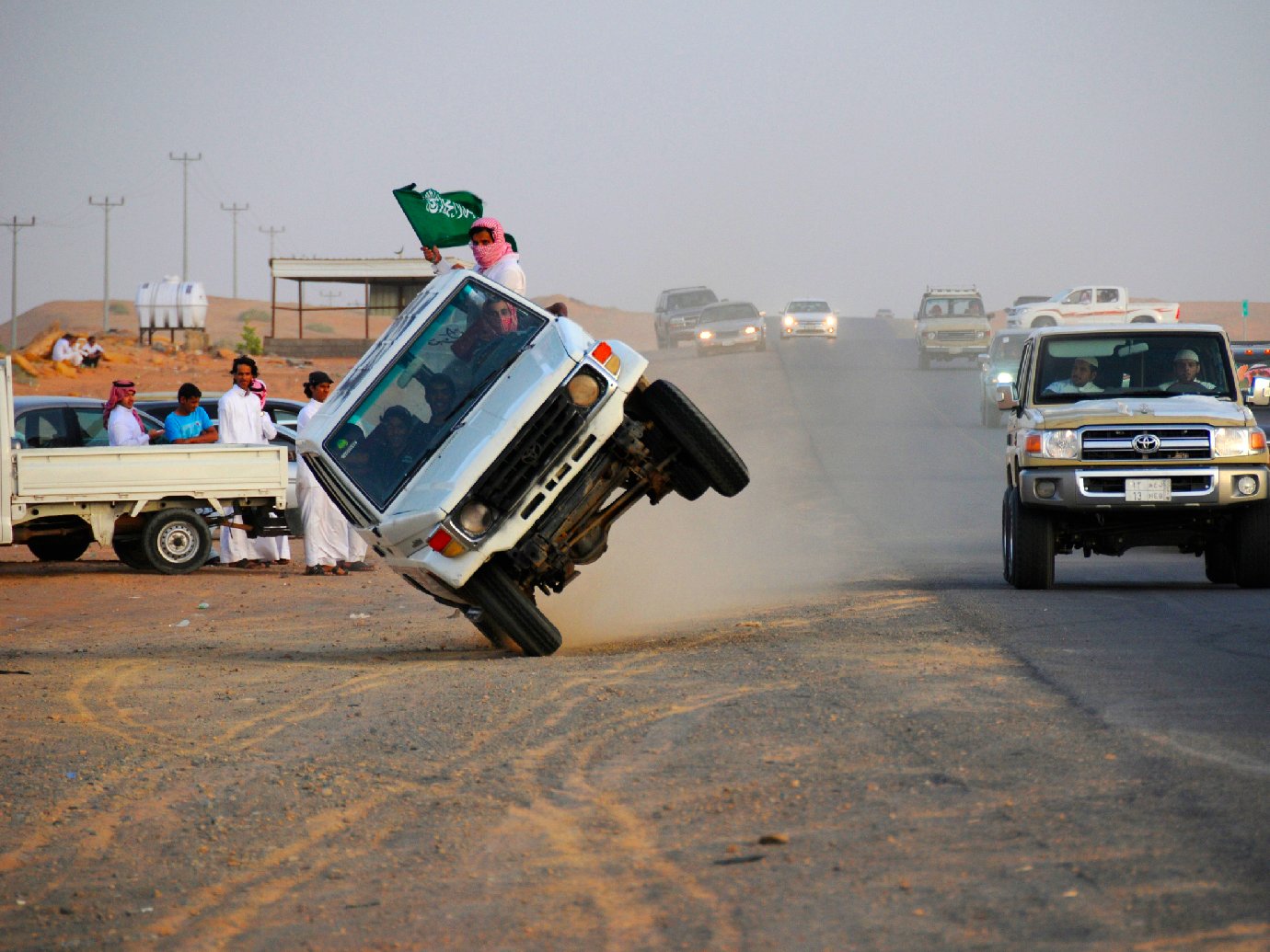 REUTERS/Mohamed Al HwaityA man with Saudi Arabia’s national flag in 2013 riding with a driver performing a stunt known as sidewall skiing as part of early national day celebrations in Tabuk.

Saudi Arabia, whose economy has taken a beating in recent months thanks to the crash in oil prices, just got another terrible piece of news.

On Monday, HSBC economists Simon Williams and Razan Nasser dropped a note on the country’s foreign-exchange holdings, and things look pretty dire for the oil-reliant nation.

It shows that FX reserves dropped by more than $14 billion (£10.1 billion) in January, falling to their lowest level in nearly three years.

The amount of reserve assets held by the Saudi government now stands at $602 billion (£434.5 billion), nearly $150 billion (£108.3 billion) down from its recent peak in late 2014, just before oil prices started plummeting. The amount of money held in foreign reserves has fallen in almost direct proportion to the price of oil over the past 18 months. The world’s most crucial commodity has lost about 70% of its value since mid-2014, falling from more than $100 (£72.17) a barrel to about $33 (£23.82) thanks to a massive oversupply in the market and stagnant demand.

Saudi Arabia, along with its fellow OPEC members, has strongly resisted calls to cut the amount of oil it produces, though it did recently agree to a freeze in production. This move was designed to try to stop the slump in the oil price, and it seems to be working, with some traders suggesting that oil has bottomed and will start to see a price increase soon.

The country is now running a massive budget deficit, just shy of $100 billion (£72.2 billion), as it refuses to cut spending even though oil receipts are down. This led to Business Insider’s Lianna Brinded arguing that the country’s refusal to cut production of oil is effectively “killing” its economy.

Not only has the oil price crash depleted FX reserves, but it has also led to less liquidity in Saudi Arabia’s domestic markets, with bank deposits slumping. Here’s what HSBC’s economists had to say (emphasis ours):

The government has continued to drawdown on its savings to cover budget shortfalls, with oil prices averaging USD/bbl 35 in January. Lower oil receipts have also been reflected in tighter domestic liquidity. Commercial bank deposits have contracted m-o-m in four of the last six months, helping — along with a recent pick-up in credit — to push the loan-to-deposit ratio to its highest reading since 2009.

In another sign of just how much the country is struggling, the Saudi government has, according to reports, been trying to attract investment from American businesses. The Financial Times says Saudi officials have been in contact with numerous corporations to try to help boost the country’s economy and increase employment.

“The point is to attract inflows of cash and create jobs, which is why there is a focus on retail and healthcare, which are both labour intensive sectors,” one unnamed banker told the Financial Times.

The country has also discussed the possibility of floating its state oil company, Saudi Aramco.

Saudi Arabia is not the only major economy that has seen foreign-exchange reserves drop massively in the past couple of years. Earlier in February, Business Insider reported that the global slowdown had led China to expend about $800 billion (£577 billion) of FX reserves since the middle of 2014.