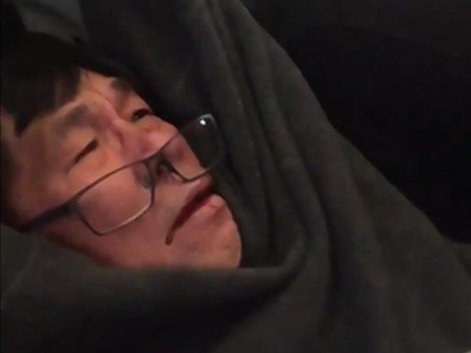 David Dao, 69, was forcibly removed on an United flight traveling from Chicago to Louisville.Twitter

An incident report obtained via a public records request names the three officers involved with dragging David Dao, 69, off a United Airlines flight in an incident that ignited public backlash.

The report itself largely echoes what had previously been relayed by video, witness accounts, and Dao’s lawyer Tom Demetrio.

Long, who was primarily involved in the physical altercation with Dao, has been a security officer since July 2015, according to a human resources report obtained by Business Insider. Smith and Rodriguez became security officers in June 2016.

All three officers have been placed on administration leave until further notice. Long’s disciplinary notice says he was placed on leave for “violation of city police or rule” and “conduct involving job performance or substandard work performance.”

Rodriguez was the first to board the plane after being told two passengers, Dao and his wife, refused to get off the full flight. Dao refused, stating “I’m not leaving this flight that I paid money for. I don’t care if I get arrested,” according to the report. Rodriguez was joined by Smith a few minutes later.

When both Rodriguez and Smith were unsuccessful in convincing Dao to de-plane, Long attempted to forcibly remove Dao by placing both hands under his armpits and lifting him up.

When Dao began to struggle, Long lost control and dropped him, which is when Dao hit his head on an armrest, according to the report.

Dao lost two front teeth, broke his nose, and suffered a concussion as a result of the scuffle, Demetrio previously said.

“The subject was brought out to the jet bridge area. He was limp so he was laid on the floor,” the report reads.

A few minutes later, Dao ran back onto the plane, stating “I’m not getting off the plane. Just kill me. I want to go home.”

Demetrio has said that Dao does not remember getting back on the plane.

“He has absolutely zero, nada memory of going back onto that plane. Not a lick of it,” Demetrio said.

United first asked for volunteers to give up their seats on the full flight to make room for four crew members who were needed in Louisville. When no one volunteered, the airline invoked its involuntary boarding policy and told people they must give up their seats.

At the time, Dao said he was refusing to give up his seat because he’s a doctor and had to see patients the next morning.

United CEO Oscar Munoz has publicly apologized for the incident after first releasing two statements that were poorly received. Dao is planning to sue the airline.

SEE ALSO:The lawyer for the man dragged off a United flight says his client needs reconstructive surgery for his injuries

NOW WATCH: Kasich criticizes United Airlines: ‘I see a breakdown throughout that company’