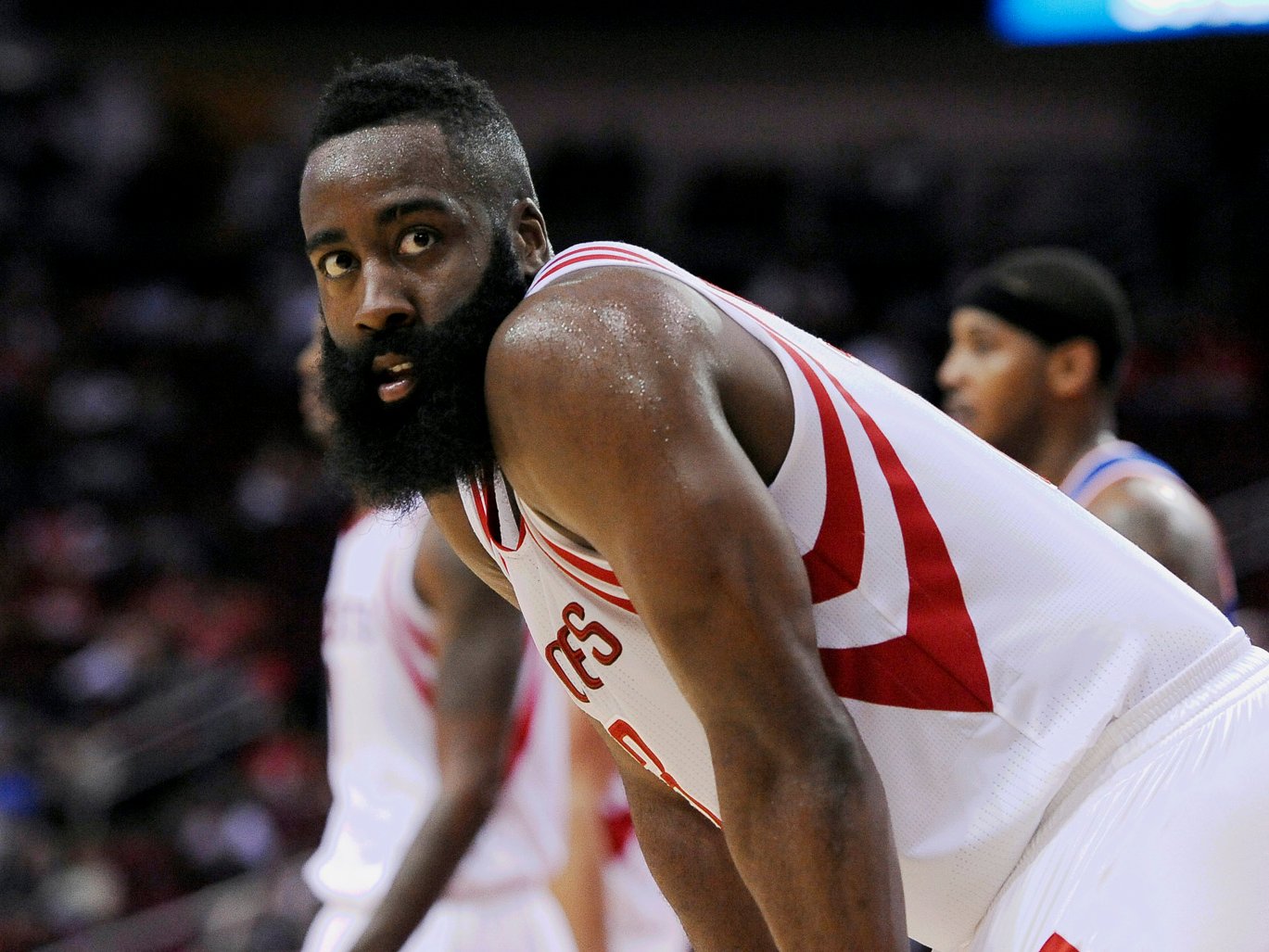 A step-in three after intentionally drawing a mismatch with rookie guard Ron Baker.

Moments later, an outlet pass to Harrell that sailed over the Knicks like a quarterback hitting a wide receiver.

Finally, another pull-up three-pointer, with Knicks guard Justin Holiday draped all over him, to finish off the deluge.

Six points and three assists in four minutes and 40 seconds, pushing a 16-point lead to 22 as the Rockets beat the Knicks 118-99. This is James Harden, point guard, and he’s tearing up the NBA.

Much was made of Harden’s nominal position change during Rockets training camp, when D’Antoni, an offensive guru credited with inspiring modern NBA offense with his mid-2000s Phoenix Suns, named him the team’s point guard. In an era in which positionless basketball is becoming more commonplace, a specific position change is noteworthy. It’s doubly so when a scorer like Harden — though he’s always handled his share of playmaking for Houston — is tasked with running an offense that made Steve Nash a two-time MVP.

The NBA world was curious to see how Harden would fair as a full-time point guard, and thus far, the move has gone swimmingly.

The Rockets are 3-2, sporting the NBA’s fourth-best offense, scoring nearly 111 points per 100 possessions. Despite D’Antoni’s reputation for commanding a run-and-gun offense, the Rockets are actually in the bottom half of the league in pace, yet are still scoring 110 points per game. In this sense, pace-adjusted stats, like offensive rating, actually do the Rockets’ offense a disservice. If we look at other stats, we see they’re second in the NBA in effective field goal percentage (weighted for three-pointers), fourth in true shooting percentage, and they’ve made more three-pointers (65) than the Wizards, Raptors, and Nuggets combined.

And behind this dynamic offense is Harden, who looks increasingly like the most dynamic playmaker in the NBA. Harden’s averaging 31.8 points, seven rebounds, and a league-leading 12.4 assists per game, while also shooting 50% from the field and 39% from three-point range, both of which would be career-highs.

“He’s such a weapon that it’s hard to figure out how you’re gonna stop him. He does a little bit of everything. Even if you stop him, it means someone else is open.” James Harden is leading the NBA in assists per game.Scott Halleran/Getty

Contrary to D’Antoni’s observation, Harden is not doing a little bit of everything — he’s doing a lot of everything. In a Tuesday night loss to the Cleveland Cavaliers, Harden scored 41 points on 13-of-20 shooting, with seven rebounds, and 15 assists, making him the first player in Rockets history to score at least 40 points, five rebounds and 15 assists in a game. The next night, he carved the Knicks for 30, 6, and 15 in just 34 minutes. On an opening night loss to the Lakers, Harden still went for 34, 8, and 17, a career high in assists.

Harden’s always been a gifted passer (6.5 assists per game over the last four years), but in D’Antoni’s spread pick-and-roll attack, Harden’s reads to rollers and shooters is wreaking havoc on opposing defenses.

The Knicks defense did itself no favors Wednesday night, but there are only a handful of points guards in the NBA who can make this pass:

Harden also makes easy drop-off passes by getting into the teeth of the defense so easily and sucking in defenders with him:

And as he gets into the paint, forcing help to come, he has the vision to find the Rockets arsenal of shooters:

All of this makes for a deadly cocktail of offense.

Knicks guard Courtney Lee, who spent much of Wednesday evening tailing Harden, said after the game of the Rockets’ attack, “You focus on [Harden] and try to get the ball out of his hands, and he’s passing it to Ryan Anderson and Eric Gordon, and these guys are hitting threes. And you worry about those threes, so you’re closing out on them or staying on their bodies and then the big man is rolling down the middle getting layups. So, it’s tough.”

All of this is contingent upon Harden’s virtuosity as a scorer. His ability to get a basket from anywhere on the court, or draw a foul, opens up opportunities for the rest of the Rockets.

Said forward Sam Dekker on Harden’s scoring prowess, “If anything it makes my job easier, because he’s going to draw so much attention with the ball in his hands that at some point the defense is going to have to collapse with how good he is at getting in the paint. … I know the ball’s gonna come at some point, it’s just a matter of when and where.”

Harden’s comfort level with his new job has been eye-opening, though D’Antoni says he’s not surprised by it. Still, the Rockets’ reliance on Harden is noteworthy. Through five games he has a 33.8% usage rate, a career high and seventh in the NBA among players averaging at least 30 minutes per game. With Harden on the court, the Rockets are scoring 118 points per 100 possessions. Without him, they’re scoring 86 points per 100 possessions.

In other words, the Rockets have tied their fate to Harden. They’re lacking in playmakers besides for Harden (Patrick Beverley is out, but has always ceded playmaking duties to Harden, anyway), and are crashing when he’s not out on the court.

However, the early returns of Point Harden are promising. Though the position switch may have to do more with job title than actual duties, Harden’s full talents are being realized, and the Rockets are better for it.