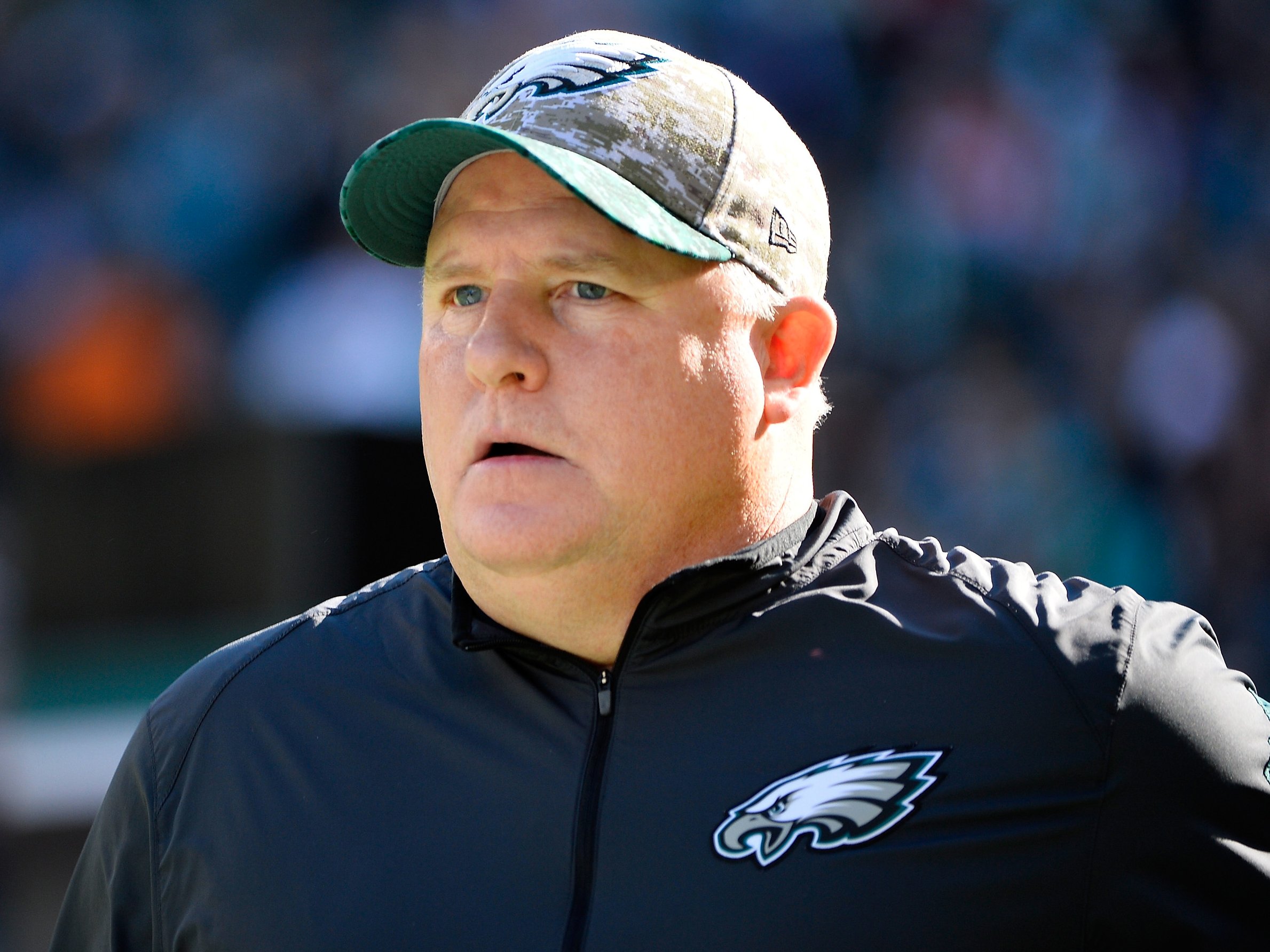 Well, that was unexpected!

The Philadelphia Eagles abruptly fired head coach Chip Kelly Tuesday evening after he posted a disappointing 6-9 record in his third year with the team. He won’t even get a chance to finish the season, as the Eagles still have one game left.

Eagles owner Jeff Lurie was thought of as a patient man, so this news is shocking. Almost all beat reporters believed Kelly would be back next year.

Kelly had posted a 26-21 record as a head coach, which is pretty good.

So, why did Lurie fire Kelly? Philadelphia resident, and ESPN NFL reporter, Sal Paolantonio says Lurie wanted to claw back Kelly’s control over the team’s personnel. Kelly wasn’t keen on that, and therefore Lurie decided to can him.

Fox Sports reporter Jay Glazer disputes this characterization of events. He says Lurie just called Kelly into his office and canned him. There was no negotiation, no discussion. Glazer, for what it’s worth, talked to Kelly on Tuesday night.

Kelly got full authority over the team last year, and completely revamped the roster. He shipped out star player LeSean McCoy. He let offensive lineman Evan Mathis walk. He failed to pay up to resign wide receiver Jeremy Maclin. A year prior he cut star receiver DeSean Jackson.

Kelly did all of this because he believes “culture beats scheme.” That’s his way of saying that if you have the right people on your team working together, you will be a better group. McCoy, and Jackson didn’t fit Kelly’s vision for his team.

Kelly’s idea is true to an extent. But you also need talent. Kelly failed to restock his team with great talent.

But, Kelly is not stupid. He made rookie mistakes as a GM for the first time, and odds are he would have corrected his mistakes this offseason. It’s bizarre to give him full control, and then only give him 1 year with that control. Lurie looks like a reactionary here.

So, why did Lurie really fire Kelly? I have a theory.

I have no inside information. I am just another fan. I read as much as possible about the Eagles, I watch every snap, and listen to a lot of talk radio about the team.

Here’s my theory: Kelly was an arrogant, inflexible man who failed to relate to players, and failed to manage up to Lurie.

A failure to adapt When Kelly joined the Eagles three years ago, he was supposed to be a genius who revolutionized the NFL. He came from Oregon where he only lost 7 games over four years. He almost won a national title.

He brought an unconventional attitude to the NFL. He plays blaring music at his practices. He monitors his players’ sleep. He makes custom smoothies for everyone. And, above all, he operates at a high speed.

The Eagles run more plays in less time than anyone else. Kelly’s attitude: The more plays you run on offense, the more chances you have to score. This is supposed to put rivals’ defense on its heels, wearing them out, leading to more scores.

Kelly has not changed. He’s doing pretty much the exact same things week after week.

Failing to manage up No matter how much power you have, you almost always have a boss. And, you always have to be able to communicate with your boss to make sure they’re comfortable with what you’re doing.

It’s pretty apparent that Kelly failed to make Lurie comfortable with his decisions. If he had a good relationship with Lurie, he would have gotten another year. Or at least one more game.

If I was Lurie, I would have been checking in with Kelly periodically throughout the season to get his perspective on why things weren’t working. If Kelly gave me logical answers and promised to adapt, then I would have given him more time. But, if Kelly was gruff and dismissive, I would have shown him the door.

I have no idea which way it went, but my guess is that it was the latter.

Beyond that, we need to remember that Lurie is running a business.

Here’s a somewhat goofy, but important thought experiment: If an Eagles fan were to go to a store tomorrow and buy an Eagles’ player’s jersey, who would it be? DeMarco Murray, the high-priced running back who can barely gain any yards? Nope. Sam Bradford, the high-priced quarterback that might not be on the team next year? Nope. Fletcher Cox, the talented defensive lineman? Maybe, but defensive linemen rarely sell jerseys. The only person I can think of is Jordan Matthews, who is a talented slot receiver. But, slot receivers aren’t stars.

This is a problem if you are an owner. Kelly cleared the team of marquee names. There is no star to sell to the fan base. Just a bunch of so-so players.

Even worse, Kelly was losing winnable games at home and the fans were leaving early. That’s not good for ticket sales, or general enthusiasm for the product on the field.

Turning off the fans Equally problematic, Kelly was gruff and arrogant in press conferences.

In a recent conference with reporters, Kelly said, “I’m not the general manager … I don’t run our personnel department.”

Except, in January the Eagles put out a press release that said, “Head coach Chip Kelly will now oversee the player personnel department.”

So, he does run the personnel department, contrary to what he was trying to tell reporters.

Interactions with the press are how a coach speaks to the fan base. Kelly was condescending to the press, which didn’t translate well to the Philadelphia fan base, which is a intelligent, engaged community. (The Eagles mean a lot to Philly.)

Kelly could have been a little more outgoing, a little bit kinder, and he could have won over more people in the press, and therefore more of the fans. There are still a lot of people in Philadelphia that support Kelly, but he did enough to turn off the fan base that Lurie felt justified in canning him.

So, that’s that. Kelly is out, the Eagles have less talent on their roster, and now they have to find a new head coach.

If you’re a Philly fan, this is all sort of depressing. As messy as 2015 was, Kelly brought an electricity to each game that was fun to watch. No matter who comes in next, it’s going to be a lot more boring.