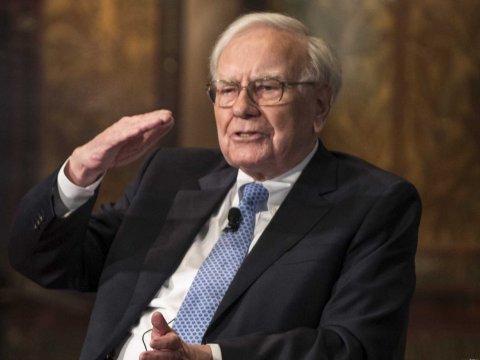 A Wall Streeter reportedly spent $300,000 at a New York strip club in one week

Warren Buffett is arguably the greatest investor of all time.

Unlike some other famous investors who swing for the fences and hit home runs every once in a while, Buffett is known for his low-volatility returns over a very long period.

Indeed, an NBER paper shows that “Buffett’s returns appear to be neither luck nor magic, but, rather, reward for the use of leverage combine with a focus on cheap, safe, quality stocks.”

In other words, he buys boring stocks that offer steady, low returns, but he amplifies those returns by betting with borrowed money.

“We estimate that Buffett’s leverage is about 1.6-to-1 on average,” write authors Andrea Frazzini, David Kabiller and Lasse H. Pedersen. They’ve written about this before.

So can you copy Buffett’s investing strategy?

The short answer is yes and no.

Anyone can invest in boring stocks. But not everyone can borrow as cheaply as Buffett and Berkshire Hathaway.

The authors identify at least four reasons why Buffett is able to borrow so cheaply (emphasis added):

In addition to considering the magnitude of Buffett’s leverage, it is also interesting to consider his sources of leverage including their terms and costs. Berkshire’s debt has benefitted from being highly rated, enjoying a AAA rating from 1989 to 2009. As an illustration of the low financing rates enjoyed by Buffett, Berkshire issued the first ever negative-coupon security in 2002, a senior note with a warrant.

Berkshire’s more anomalous cost of leverage, however, is due to its insurance float.Collecting insurance premia up front and later paying a diversified set of claims is like taking a “loan.” Table 3 shows that the estimated average annual cost of Berkshire’s insurance float is only 2.2%, more than 3 percentage points below the average T-bill rate. Hence, Buffett’s low-cost insurance and reinsurance business have given him a significant advantage in terms of unique access to cheap, term leverage. We estimate that 36% of Berkshire’s liabilities consist of insurance float on average.

Based on the balance sheet data, Berkshire also appears to finance part of its capital expenditure using tax deductions for accelerated depreciation of property, plant and equipment as provided for under the IRS rules. E.g., Berkshire reports $28 Billion of such deferred tax liabilities in 2011 (page 49 of the Annual Report). Accelerating depreciation is similar to an interest-free loan in the sense that (i) Berkshire enjoys a tax saving earlier than it otherwise would have, and (ii) the dollar amount of the tax when it is paid in the future is the same as the earlier savings (i.e. the tax liability does not accrue interest or compound).

We received the premiums on these contracts in full at the contract inception dates … With limited exceptions, our equity index put option and credit default contracts contain no collateral posting requirements with respect to changes in either the fair value or intrinsic value of the contracts and/or a downgrade of Berkshire’s credit ratings.

Hence, Berkshire’s sale of derivatives may both serve as a source of financing and as a source of revenue as such derivatives tend to be expensive (Frazzini and Pedersen (2012)). Frazzini and Pedersen (2012) show that investors that are either unable or unwilling to use leverage will pay a premium for instruments that embed the leverage, such as option contracts and levered ETFs. Hence, Buffett can profit by supplying this embedded leverage as he has a unique access to stable and cheap financing.

So, unless your a multibillion AAA-rated insurance conglomerate, you’re not going to be able to invest like Buffett.

NOW WATCH: Nationwide’s Super Bowl commercial about dead children is about corporate profits … in a way that we can all appreciate