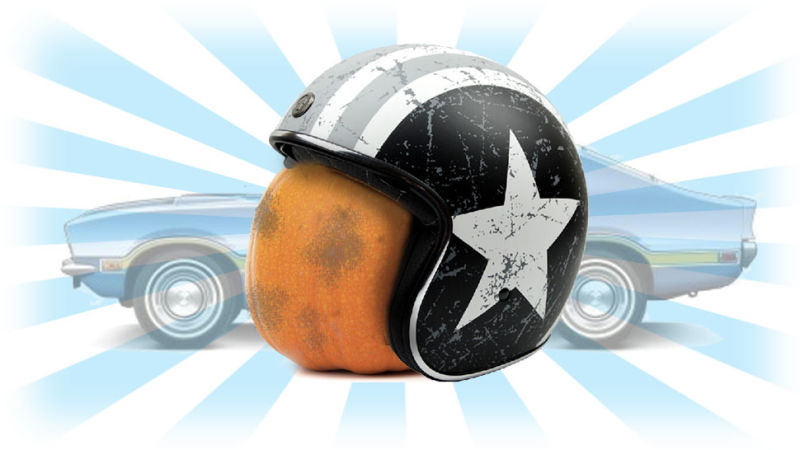 It’s been a while since we had a Would You Rather, and I’m pretty sure your ichthyologist told me you needed about one of these a month, so let’s do this. This week, we play with the very fabric of spacetime!

So, here we go. Would you rather:

You’re in your garage mixing up combinations of motor oil, coolant, and gargoyle blood, because it’s a Wednesday night, when you accidentally summon a powerful demon. This demon lives in the actual spacetime of the universe, and he grants you an enchanted one-gallon jug of special time-travel 10W-40.

If you pour at least a quart of oil in any car, and drive it exclusively for at least six months, that car will be transformed into a time machine! But there’s one catch: that car can only travel back in time to the date it was first built.

So, if you want to go back to, say, 1974, you could find yourself a Ford Maverick, pour in the quart, drive it for six months, and then say the incantation or lick the dash or whatever and whammo, you’re in the mid-Nixon administration.

With your one-gallon jug, you can do this four times, getting further and further in the past each time.

So, is it worth it? The ability to travel back in time, as long as you’re willing to drive a (probable) old shitbox around for six months? And just one way? Maybe. Could be a good way to get a ‘do-over’ year, right?

Or, would you rather:

While hiking in the woods, you find a partially-rotted yet enchanted pumpkin wearing a vintage open-face racing helmet. A note scrawled on the helmet in what could be either blood or Sharpie describes the pumpkin’s power:

“This glorious pumpkin is the legendary Squash of Velocity, a magical gourd that can bestow supernatural auto-racing ability to any who dares have public intercourse, in full view of other goodmen and goodwomen, with this pumpkin. The effects will last one day per 20 minutes of pumpkin-love . Keep thy shiny side up, and thy oily side down!”

So, to recap, if you fuck the pumpkin in public with people able to see you, you’ll become an amazing racing driver. And, the effect will last one day per 20 minutes of pumpkin-love.

There’s your choices: have the ability to break the laws of physics and travel back through time (with some pretty big restrictions), or become the world’s greatest racing driver, as long as you don’t mind everyone thinking you’re a disgusting pumpkin fucker.

Choose! Choose and let us know what you chose, because I’m nosy!

UPDATE: I made the timeframe of the pumpkin-fucking-induced racing skills much longer, because I realized I was being too harsh with the original limits. Sorry.