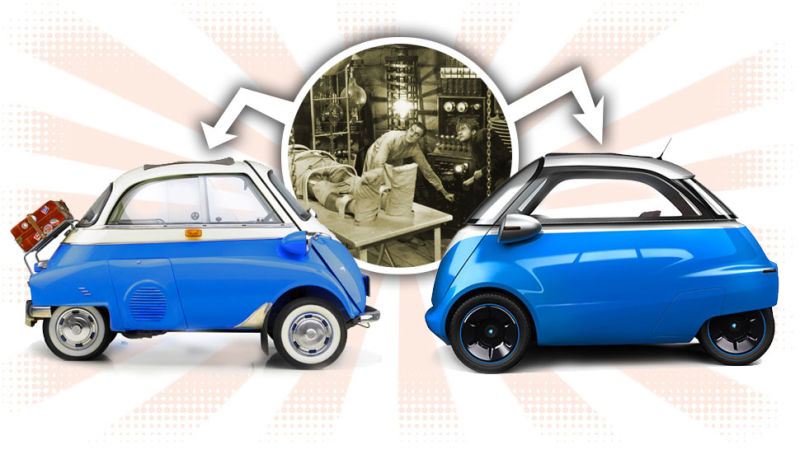 We’ve seen many clever little electric city car concepts come and go, and very few of them actually ever make it to production. There’s even been ones that resurrect beloved and iconic microcars of old. It’s happening again, and it looks promising: a new, electric Isetta. It’s called the Microlino, and their motto is really stupid.

The motto is “It’s not a car,” which is stupid because, come on, it is a car. Yes, it’s very small and an unusual design, but that unusual design is directly cribbed (well, updated) from the 1953 Iso Isetta (most famously known when produced by BMW), and nobody doubts that the Isetta wasn’t a car.

A microcar, sure, a bubblecar, yes, but, let’s be honest here, it’s still a car. A tiny, weird, charming car.

The good news for Microlino, though, is that it’s easy to ignore their motto and just look at the car. If you’re making a low-speed electric city car, the Isetta is a pretty reasonable choice to start with.

The unusual front-door design makes sense when you picture these parked nose-to-curb, and the design is proven to work: BMW alone sold over 160,000 Isettas, and they both helped get postwar Europe motoring again, as well as saving BMW’s ass after the war.

It may seem a bit weird for an unrelated swiss company, Micro, to be able to come in and very blatantly copy the design of a well-known car, but BMW’s license to the design expired decades ago, and Iso (or Iso Rivolta), the Italian company that originally designed the car, has been gone since 1974. So, it looks like Isetta-designs are up for grabs.

The company seems to have either converted an original Isetta to electric power, or just made a video that suggests that they have:

The most novel innovation seen in the video comes at about 1:19, where you see a woman pull a long charger cord out of the back of the Isetta, and that seems to be a feature of the proposed production car, which they claim will have a 30 foot integrated cable spool. That’s a really good idea, especially if it retracts like the cable on my mom’s old Electrolux.

The updated Isetta design is clean and appealing; they did a good job translating the old design to a modern vocabulary. At first I thought the higher location of the lights threw the look off, but then I realized that the light units also incorporate the rear-view mirrors, which is clever.

Microlino is planning on having the car classified under Europe’s L7e quadracycle category, like the Renault Twizzy, which should answer all your questions about how the hell do they think this would pass modern crash standards: it won’t have to. Microlino claims “we have made a crash simulation with 50 km/h and passed it.”

The company says the Microlino will have a 20 HP electric motor that’s good to get the neo-Isetta up to about 60 MPH top speed, with a range of around 60-75 miles or so. For a little quadracycle-type thing like this, that’s probably pretty reasonable.

They’re predicting a price of what would be just under $12,000 U.S. A Renault Twizzy, to compare, would be about $8329, but it has a much more open and rudimentary body, tandem seating, and is arguably less stylish.

The company is predicting the first small batch of production will start sometime in 2017, but, like all these little startups, I wouldn’t counsel an aggressive breath-retention plan.

I guess I could be more cynical about the rehashed design and unlikely success, but I’d love to see a bunch of these on the roads. I love old microcar designs enough that I’d be happy to see cities populated with modernized versions of them.

A world with slightly sleeker Gogomobils and Messerschmitt Tigers and Zündapp Januses is the sort of world I’d like to live in, I think, so I’ll cautiously hope these Swiss folks can pull this off.