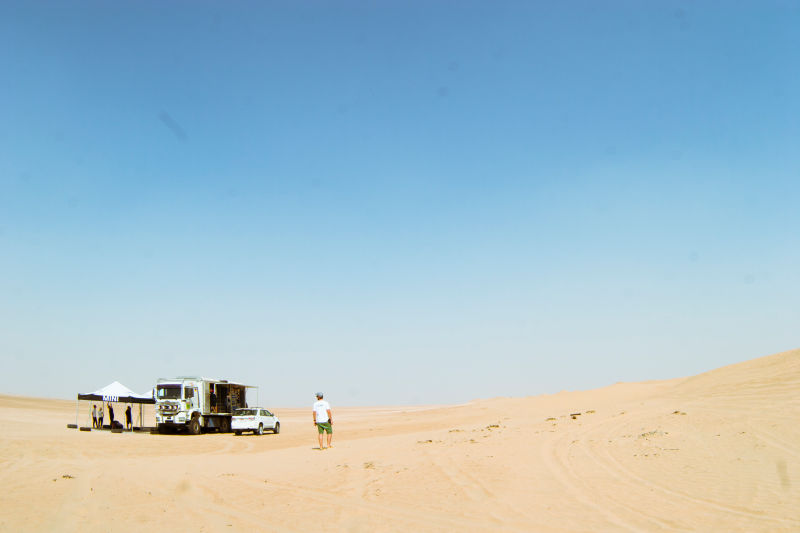 I remember him sitting up on the deck of the supply truck, smoking and watching the rest of the X-Raid crew work on the two Dakar-winning Minis assembled out here in the dunes outside Dubai.

I was there with a handful of reporters to test the cars last year, but I couldn’t figure out exactly what he did. He wasn’t a mechanic. He wasn’t a photographer. He wasn’t an official or a designer or a navigator. He definitely did not take what was in front of him too seriously, interrupting a little interview I was attempting with one of X-Raid engineers.

The engineer, a Spanish guy, was telling me every little technical detail of the all-wheel-drive carbon-over-steel race trucks that had won the toughest raid in the world, the Dakar Rally, some months before. He had gone over so many details, shown me so many unexplained compartments and levers and switches, that I admitted I didn’t know what else to ask.

“Ask him,” the smoking German said from his perch, gesturing with his cigarette, “about his illegitimate children.”

The Spaniard laughed. It was like the burden of consequences didn’t quite reach out here into the dunes, even with the watchful state of Dubai hovering just past the horizon. He left, and I walked up to talk to the mysteriously relaxed German.

It turns out he was Stephan Schott, something of a water carrier for the rest of the team, fast-hauling spare parts near the front runners. Why he was at this event I do not entirely know. But race trucks were there and so was he.

These are long distance off-road rallies like the Dakar, running from one obscure corner of the world to another with little in between—Paris to Ulaanbaatar, or Paris to Samarkand to Moscow.

He was a privateer who had made his money in something I didn’t know and lived in a small German town called I don’t know what. He was a friend of the fellow rich and mysterious German who runs X-Raid itself, Sven Quandt, and had gotten himself one of Sven’s cars to compete in painfully grueling “rally raids.”

These are long distance off-road rallies like the Dakar, running from one obscure corner of the world to another with little in between—Paris to Ulaanbaatar, or Paris to Samarkand to Moscow. Schott is 63 now, and concentrates on the major events, crossing Argentina, Peru, Bolivia, Chile, Morocco, Abu Dhabi, and Poland, but he dreamed of running events in Western China if they became more serious. Raids are self-administered torture. They mean being sleep deprived and battered and worn out for hours and days and weeks with nothing to show for it.

Schott had had a Mitsubishi Pajero before he had this Mini-branded X-Raid. He said that he liked to fire it up some sundays in his sleepy village, with its straight-cut gears and open exhaust, and drive it to pick up a loaf of bread. He smiled when he thought of waking the rest of his town up, to be known in his bright red race truck, recognized.

We moved inside to X-Raid’s air-conditioned tent and sat down at a table with some cold bottled water. We talked until he needed another smoke. (He admitted he’s such a heavy smoker that he has a carbon-fiber cigarette holder built into his car.)

I talked to him for a while about all the trips he’d done and how he met whom and what they were like in person and what it’s like to run these rallies. In some moments, the romance came back to him and he told one story about running the Dakar one very tough year when he nearly quit.

That meant something to him. Schott is the only driver to have never failed to complete the Dakar Rally since it moved down to South America.

His friend Quandt, he explained, was an exacting man. The Dakar is broken up into daily sections, and each section should only ever take from sunrise to sundown to complete, never longer.

What should happen and what does happen are two different things. Rough terrain and hard running means that trucks break and drivers get lost, so teams often end up finishing their sections deep into the night. It’s standard to add extra headlights to your truck in the case that you run late, so that you can see in the night. Quandt, however, ordered that his cars should not run with extra headlights. They should simply be on time, and he would not waste any extra amperes on tardiness or failure.

So that is how, Schott explained to me, he ended up out in the dunes in the pitch black of night, with a truck stuck in the sand with no way to see what was in front of him. He talked about lying down in the sand with his navigator, taking in the stars above them. Other cars surrounded them on the left and on the right, sleeping, not even trying to go forward in the two-meter visibility of the dark. Schott, however, decided to limp the car through the dunes with him behind the wheel and his navigator walking in front of the car, finding the way with his headlamp.

He gets up some mornings and thinks of the whole thing like a job, just another day behind the wheel as if crisscrossing the Andes is just going from A to B.

They had to deflate their tires down to 0.8, he said, and they had no air bottle to refill them. Only at 5 a.m. did they make it to their team camp. Schott and his navigator took off their helmets and slept in their overalls while their mechanics fixed their truck. Two hours later, they were awake and behind the wheel again.

He paused and said that sometimes during the Dakar he feels like a commercial truck driver. He gets up some mornings and thinks of the whole thing like a job, just another day behind the wheel as if crisscrossing the Andes is just going from A to B, as if there is a grand point of a bunch of people wheeling race trucks through the more deserted corners of the globe.

But I looked at him and he seemed like a man who had been outside of society for longer than he could remember. I don’t know how many people like him I’ve met, hanging on to the sides of globetrotting race teams.

Schott didn’t seem like a guy on the job for the last five, 10, 20 years. He seemed like a man on permanent vacation.