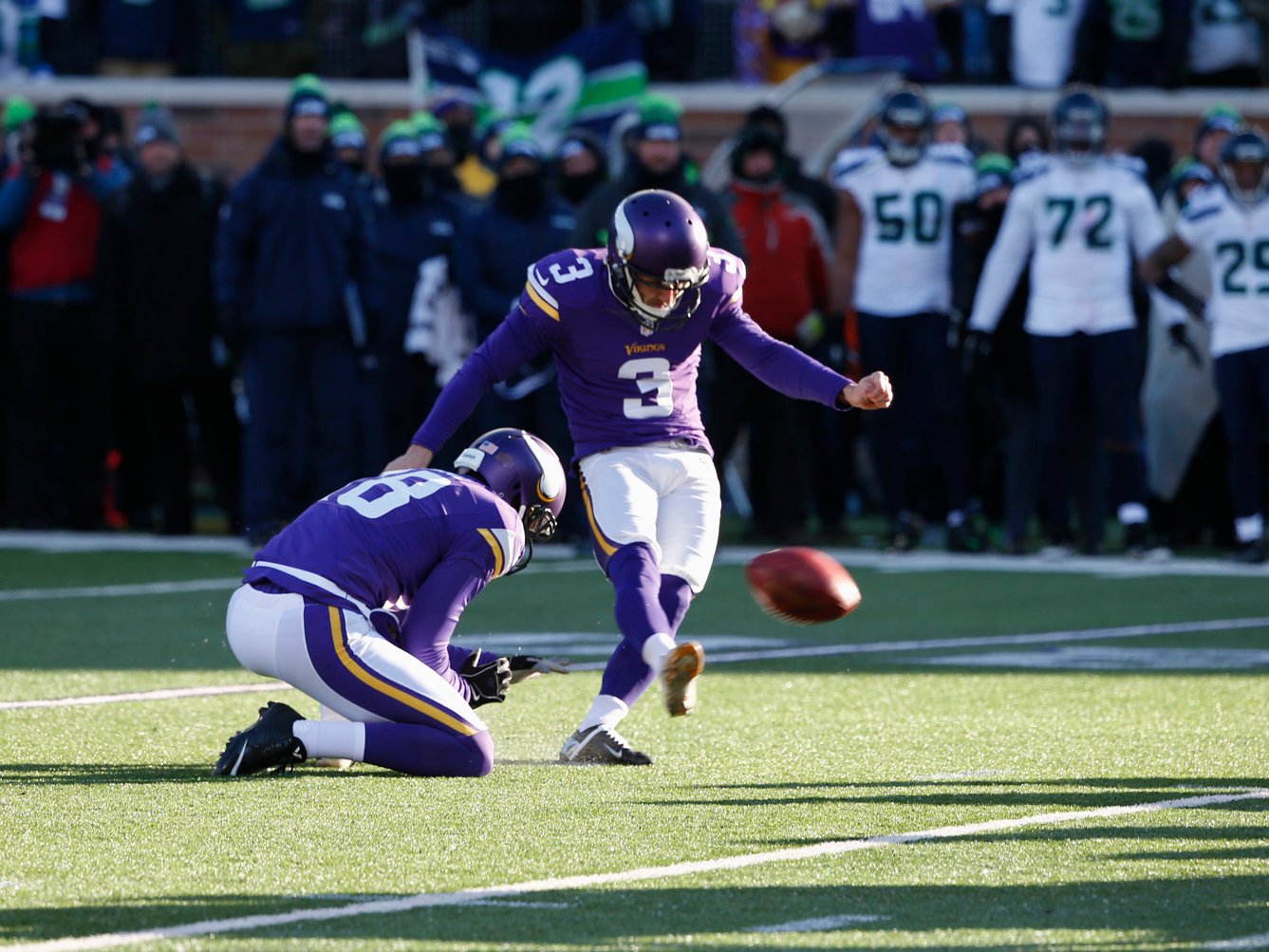 Minnesota Vikings kicker Blair Walsh made news for the wrong reasons on Sunday.

With under 30 seconds left in the NFC Wild Card against the Seahawks, with the Vikings trailing 9-10, Walsh set up for a go-ahead field goal from 27 yards away.

And to the shock of everyone, he missed it.

Not only was it a total letdown as it was a short distance and he’d already nailed kicks from 22, 43, and 47 yards, Walsh led the NFL in made field goals this season, hitting 87% of his kicks.

To find out why Walsh cracked in the biggest moment of the season, we spoke to Stefan Fatsis, a Slate writer and the author of “A Few Seconds of Panic: A Sportswriter Plays in the NFL,” which details training for three months with as a placekicker for the Denver Broncos.

“There’s a hundred things that might have had a minute effect on the way his foot struck the ball,” Fatsis explained. “I think the most logical explanation is that he rotated too quickly and pushed to the left.”

Fatsis ran through numerous things that could go wrong.

The weather: “The ball is incredibly hard in cold weather, it’s much more difficult to kick. Your foot makes no sort of indentation in the ball which is what gives you more power and strength.”

However, he said he didn’t see anything “glaring” in the video to explain the missed kick.

Fatsis also dispelled one of the common theories about missing a kick — the laces being pointed toward the kicker. That can affect a kick, according to Fatsis, but it didn’t affect Walsh on this day.

“An NFL kicker can kick a grapefruit from 27 yards in any weather conditions,” he said. “That kick was so short and if you watch the replay, it’s hard to think the laces were solely to blame. Plus, he had kicked a 47-yard field goal with the laces pointed right at him earlier in the game.”

Instead, he believes Walsh just rushed it, due to a number of factors.

“I think he rushed it. And when you rush it, and you usually rush it because you’re nervous or you’re afraid that someone might, there might be a reason to go faster. There’s a threat of the kick being blocked, someone’s done something earlier in the game — and Richard Sherman came very close to blocking that kick. And I think Richard Sherman also came close earlier in the game to blocking one of the field goals. So, if it’s on your mind, that ‘I gotta get through this faster because there is a risk of it being blocked’ or ‘I’m nervous’ because it’s human to be nervous in this situation… your natural tendency is to hurry it.”

Fatsis broke down what happens if a kick is hurried, saying a kicker will rotate his hips too quickly, turning too far — in Walsh’s case — to the left, thus pulling his foot to the left. If the entire motion is too far ahead, the kicker’s whole body ends up pointing in the wrong direction

This may have been the case with Walsh’s kick:

Lastly, Fatsis pointed to the human element in such a high-pressure situation.

“[Athletes] all feel pressure in high situations; you wouldn’t be human if you didn’t feel it. They acknowledge that pressure.

“The trick, as with any sort of high-performance activity, is to find a way to isolate your brain so that you’re focused on something else. You talk to sports psychologists and they will tell you — and every top level athlete does this — they have a place where they go, they have something that they focus on, they have a phrase that they repeat over and over again to find a way to block out and focus on the task that you’ve done a million times before.”

Regardless, Walsh has the offseason to think about it, and the Seahawks are still alive.