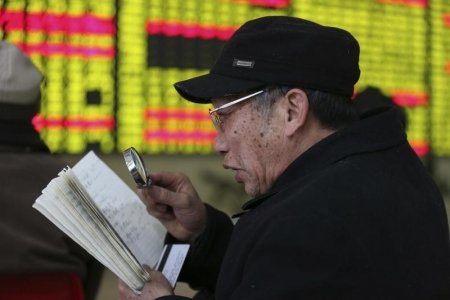 Risk markets are now waiting to see how Chinese equities will fare later in the session. Shanghai shares stabilized somewhat on Tuesday, following an arresting 7 percent plunge at the week’s start that spooked stocks worldwide.

Both the dollar and yen attracted bids amid the risk aversion that gripped financial markets globally from the start of 2016.

The common currency was steady at 128.045 yen following an overnight drop of 1 percent. It dipped as far as 127.535 on Tuesday, its lowest since late April.

Kathy Lien, managing director of FX strategy at BK Asset Management, wrote that the U.S. and Japanese currencies were being bought because “China is in trouble, U.S. data has been disappointing, Japan refuses to increase stimulus and oil prices continue to fall, but everyone’s greatest fear is that stocks have finally peaked”.

In commodities, crude oil prices struggled near 11-year lows, with the market giving more attention to the stronger dollar and swelling U.S. inventories rather than growing tensions between Saudi Arabia and Iran.

Relations between the two major oil producers collapsed in acrimony this week after Saudi Arabia’s executed a Shi’ite cleric, setting off a storm of protests in Tehran.

Oil-linked currencies like the Canadian dollar sank deeper on shaky crude prices. Canada’s loonie fell to a 12-year low of C$1.402 to the dollar overnight.