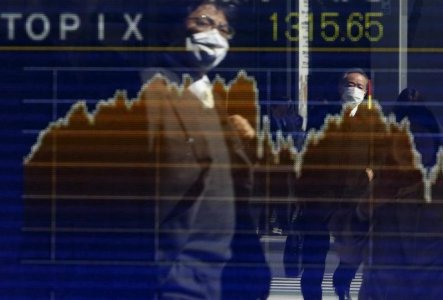 Thomson ReutersPedestrians wearing masks are reflected in an electronic board showing the graph of the recent fluctuations of the TOPIX outside a brokerage in Tokyo, Japan

TOKYO (Reuters) – Asian shares consolidated their gains on Wednesday, shaking off earlier losses following attacks on the airport and a rush-hour metro train in Brussels as investors look to a brightening global economic picture.

“After the Group of 20 meeting and China’s parliament meeting, markets got confirmation that policymakers will take necessary steps in monetary, fiscal policy,” said Koichi Yoshikawa, executive director of financial markets at Standard Chartered Bank in Tokyo.

“That is reassuring markets and investors funds’ that had fled to the U.S. markets are returning to high-yielding currencies and emerging markets,” he said.

Financial markets took the attacks in Brussels that killed at least 30 people in their stride, with risk appetite quickly coming back and gains in safe-haven assets evaporating within hours.

In the currency market the safe-haven yen quickly gave up its gains and last stood at 112.23 to the dollar , down 0.6 percent so far this week.

The dollar was also helped by a rise in U.S. bond yields after Chicago’s Federal Reserve president, seen as a policy dove, struck a bullish tone on the U.S. economy.

U.S. interest rate futures are also fully pricing in a chance of more than one rate hike by the end of year.

Brent futures traded at $41.59 per barrel, down 0.5 percent in Asian trade on Wednesday but still not far from a three-month high of $42.54 set on Friday.