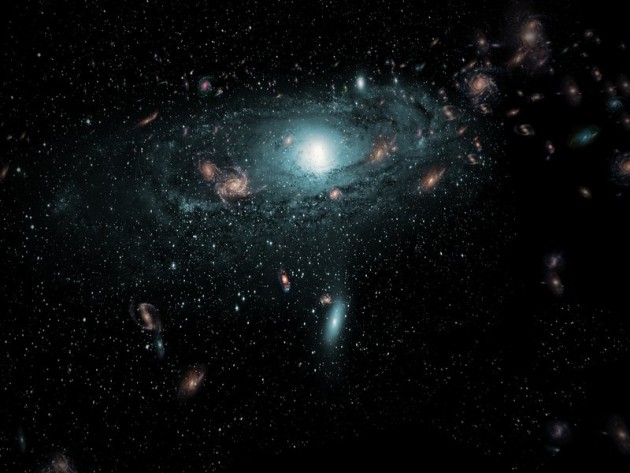 In a celestial game of Hide and Seek, astronomers have uncovered hundreds of galaxies a mere 250 light-years away. These galaxies are actually getting closer, too, as they pull us toward them thanks to a phenomenon known as the Great Attractor.

The galaxies were previously obscured behind the Milky Way, which covers about 20 percent of the sky. Astronomers have always suspected galaxies existed in this region, but traditional telescopes have been unable to view them. Thanks to radio telescopes, however, scientists now have a much better idea of what’s hiding in this obscured zone.

In all, nearly 900 galaxies were mapped in a place known as the Zone of Avoidance, which sounds like a place the Guardians of the Galaxy might visit. You can see a concept of what this area looks in the image above.

Here’s where things get really interesting. Scientists suspect that the newly discovered galaxies play a role in the Great Attractor’s immense gravitational force, which is pulling objects toward it at an astonishing rate. According to Lister Staveley-Smith, lead author of the new study, our Milky Way is moving toward a collection of galaxies in the Zone of Aviodance at more than 1 million miles per hour.

Astronomers say their work is just beginning following the new discovery, with more studies being planned as they try and figure out the mysteries behind the Great Attractor’s hypnotic force.