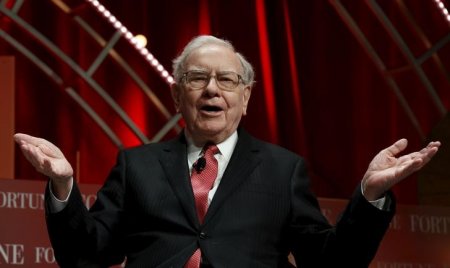 Thomson ReutersWarren Buffett, chairman and CEO of Berkshire Hathaway, speaks at the Fortune’s Most Powerful Women’s Summit in Washington

(Reuters) – Warren Buffett’s compensation for running Berkshire Hathaway Inc
edged up 1 percent last year to $470,244, reflecting an increase in the cost of keeping the billionaire safe.

Buffett’s salary remained at $100,000, the same amount he has received for more than a quarter century, Berkshire said in a Friday regulatory filing.

The cost of providing home and personal security services for Buffett rose to $370,244 from $364,011 a year earlier. Buffett also reimbursed $50,000 to Berkshire for personal costs.

Buffett often eschews trappings commonly associated with billionaires, and lives in a 10-room home on less than three-quarters of an acre in Omaha.

But he still controls nearly 19 percent of Berkshire’s stock, and 33 percent of its voting power, according to the regulatory filing.

Buffett is worth $66.2 billion, Forbes magazine said on Friday.

Chief Financial Officer Marc Hamburg was the highest paid employee listed, with compensation of $1.36 million in 2015.

Executives who run some of Berkshire’s roughly 90 units make more than Buffett.

Among them is Gregory Abel, chairman and chief executive of Berkshire Hathaway Energy, who made $40.77 million last year.

The nonprofit group, which owns one Class A share of Berkshire, said such reporting could help Berkshire’s insurance units “identify and anticipate gaps and opportunities,” and confirm their status as industry leaders.

In his annual shareholder letter on Feb. 27, Buffett said it was “highly likely” that climate change posed a “major problem for the planet,” but that Berkshire’s insurance units would not face big losses.

Climate change should not be on any “list of worries” for Berkshire shareholders, he said.