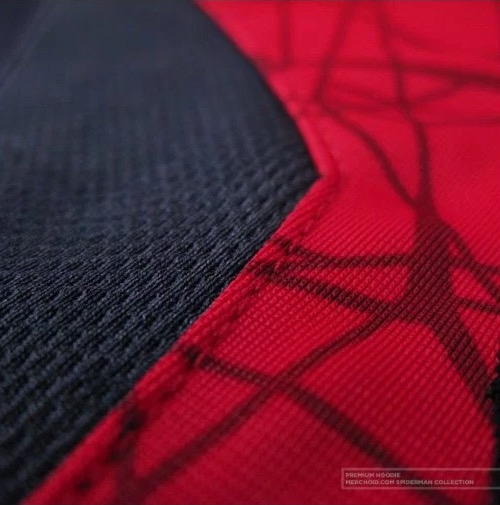 How cool would it be if the costume for Spider-Man was revealed before Captain America: Civil War hits theaters? While Marvel is unlikely to reveal the character’s final appearance before the movie comes out in May, merchandise unveiled by Merchoid could give us an idea of what the Web Slinger will look like.

Here’s what Merchoid had to say about the new Spider-Man hoodie:

There’s been lots of talk online and people have been really excited that this could be what reveals the new look Spider-Man. However, Marvel is doing a fantastic job of keeping the new Spider-Man costume under wraps, so we haven’t seen it yet! What we can say is this hoodie was deigned in partnership with Marvel, who provided all the design elements from their 2016 merchandise range, including the ‘messy’ webbing which we haven’t yet seen in any prior Spider-Man costume. We’re really excited to see what Spider-Man fans think! If this is the first look at the new costume, are you happy with the new direction?

Two things that stand out: Merchoid apparently hasn’t seen the final costume, though the retailer did work with Marvel when designing the hoodie. Also, it features a “messy” webbing, which seems like it might reflect the mindset of a teenager who has superpowers. Being young is hard!

Even if it’s not what Spider-Man’s costume will look like in Civil War, the hoodie is still pretty slick.