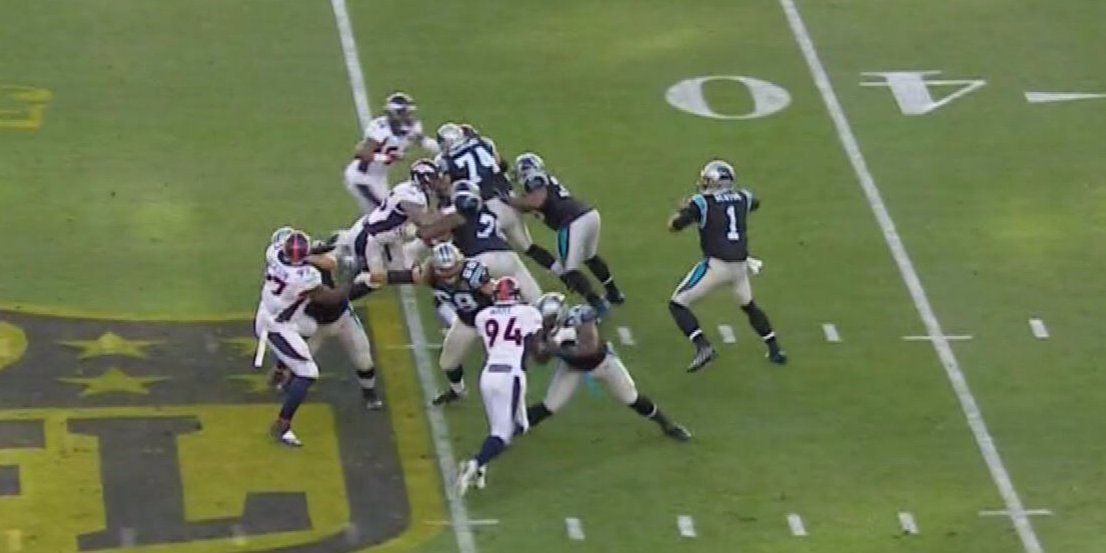 The field at Levi’s Stadium during Super Bowl 50 was terrible, and now one play has surfaced showing just how much trouble the players were having.

Players on both teams were complaining about slipping on the grass during warm-ups, and several players had to change their cleats during the game because they simply couldn’t get their footing.

“The footing on the field was terrible,” Broncos cornerback Aqib Talib said after the game. “San Fran has to play eight games on that field so they better do something to get it fixed. It was terrible.”

Although the NFL had completely replaced the sod in advance of the Super Bowl, the playing conditions nevertheless negatively affected the quality of the game — particularly for Michael Oher, an offensive tackle for the Panthers.

Here’s a play with Oher literally skidding backward on top of the grass like a glitch in a video game. Oher had a bad game on his own, and the Denver defense would have torched him on a better field, too. But this turf certainly didn’t do him any favors:

If you’ve followed the 49ers since they moved to their new Santa Clara stadium, the poor conditions won’t come as much of a surprise. The grass at Levi’s Stadium has been a mess practically since the 49ers moved in. Earlier this season, Baltimore Ravens kicker Justin Tucker missed a routine field goal, and replays showed his foot digging well into the grass.

Large chunks of grass were all over the field throughout the game:

They’re having some turf trouble at Levi’s Stadium. Groundskeepers are walking around, picking up and/or flattening chunks of grass. As Carolina head coach Ron Rivera said afterward, both teams had to play on the same field and it’s ridiculous to even suggest that the field affected the outcome of the game. Still, it’s disappointing that something as basic as the grass would be a story at all, especially in the Super Bowl.

NOW WATCH: The stadium for the Super Bowl is a $1.2 billion high tech wonder