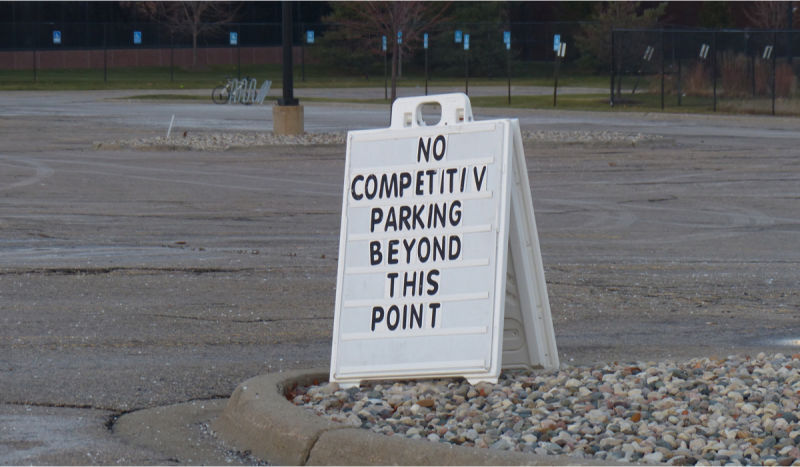 You may not know this, but some automakers have special parking lots in the middle of nowhere for employees who “go rogue”—who dare to drive cars from competing manufacturers. Here’s why I think it’s bullshit.

I experienced this firsthand working at Fiat Chrysler. There, it’s an official policy: competitive vehicles are not allowed to park in certain lots and if they do, they either receive a ticket or wind up with a parking boot. In the latter case, employees have to tell their supervisors, and the supervisor will have to call security; it’s a bit of a mess, and can be rather embarrassing for an employee.

And it can make finding a spot pretty hard if you’re caught unaware.

The Parking Spot Search From Hell

Until last year, I was working at Fiat Chryslerdesigning powertrain cooling systems for the next generation Jeep Wrangler. My brother had just moved in with me for the summer to start with the same automaker as a product planning intern, so I had to show him the ropes.

On his first day, he followed me to the technical center so I could show him where to park, but just when we got to my go-to spot inthe north parking garage, I realized we had a problem: he was driving a Toyota.

For the next 20 minutes we scoured the Auburn Hills campus, driving past a slew ofcars with “Out Of A Job Yet? Keep Buying Foreign!” bumper stickers until we finally found a spot where my brother could park his durned furner car (though it was built in Canada, like much of Chrysler’s current crop.)

The spot was approximately 5,000,000,000 miles from the building, and my brother could only mutter, “Seriously?”

“Should have bought a Dodge Caliber!” I joked before peeling out and ditching him to park my junky old Jeep in a spot just a few yards from the entrance. I’m a terrible brother.

This is pretty common practice at the American automakers’ facilities. I reached out to Ford, GM, Fiat Chrysler, Honda and Toyota on the policy—only Toyota and Honda replied that they had no such discriminatory parking rule. They basically don’t care where you park your car, as long as you don’t pull a BMW Driver and park sideways across three disabled spots.

GM and Fiat Chrysler told me they had formal parking rules for competitive cars, and Ford said their parking setup is not a corporate policy, but one that started at the Dearborn truck plant about a decade ago and has been adopted by other facilities to “encourage them to buy what they build.”

But these parking rules weren’t just devised by the companies themselves; local unions played a big role. GM’s parking policies were agreed upon at each facility by “local leadership,” GM mentioned in an interview. “Local Leadership” is another term for union representatives, though the policies apply to all employees, not just those in the union. (Contrary to what some people think, not every American automaker employee is a UAW member.)

A parking rule that relegates competitive vehicles to the outer reaches of the universe may not seem like the most pressing issue in automobile-dom, but this is Michigan we’re talking about—a place where six months of the year, walking to your car is complete hell.

Really, though, the parking policy is just a manifestation of a toxic corporate culture, and one that could stand to change.

A Culture That Breeds Ignorance

This might sound counterintuitive on the face of it, but employees who drive a competitor’s cars are a company’s biggest asset. They bring perspectives to automotive design and engineering that differ from those of people who have all been driving the same few company-built products throughout the years. There’s no need to punish these competitive-car owners. On the contrary,you want them on your team.

A few years ago, when I was but a lowly intern, I spoke with an engineer about small cars. “I’m buying a Dodge Dart,” he said. “Oh cool, what did you like about it compared to the others in the segment?” I inquired.

He told me he hadn’t looked at anything else in the class, and that the Dodge Dart was the best small car there was.

Now, we’ve driven the Dart, and while it’s not a terrible car, it’s heavy and sluggish and definitely not at the top of the pack. Matt Hardigree calls the Fiat-platformed Dart “a dire reminder that European cars are never actually as great as we think they are,” and Patrick adds “the Dart leads in nothing but disappointment.”

So when this engineer tells me the Dart is the best in the segment, I realized that this guy, like many other employees at FCA, had been driving Chrysler products much of his life and that he wasn’t open to the idea of owning a competitive car. Part of the reason was the culture where employees who drove non-Chrysler products were teased (though often jokingly), and part of the reason was the parking situation, which, especially in harsh Michigan winters, is an enormous pain in the ass.

This kind of culture means that the vast majority of people designing a company’s future products only have experience driving cars built by that company. How useless is that? Do you really want a hoard of Dodge Dart drivers designing your next small sedan? No, you want to have Honda Civic, Ford Focus and Mazda3 owners on your design team, because these people know what driving and owning cars at the top of the class feels like.

To be sure, there’s plenty of competitive benchmarking that takes place in the auto industry, so engineers do get some time behind the wheel of competition every now and again. But a few days here and there doesn’t compare to actually owning a car and driving it everyday.

But How Will It Look If People See Our Parking Lot Filled With The Competition?

One argument for segregating competitive cars from “within the family” vehicles is that it would look bad if the company lot were filled with the competition.

In a recent UAW 774 campaign aiming to get more GM employees behind the wheel of the General’s cars, UAW rep Tom Carberry told GM Authority: “If you work for GM and park a Ford in your driveway, what does that tell your neighbors? That GM is so bad that not even a GM employee will buy their products!”

No, Tom, it doesn’t say that. Instead, what it says is that this person actually does some shopping and doesn’t blindly follow the herd. This person went out and found the best car for themselves or their family, and bought it. That’s respectable, and that’s the kind of free-thinker I want building my car – someone who has a strong understanding of what’s available on the market.

And the idea that people will think less of you if your parking lot is filled with competitive cars is bullshit. You’ve got big signs that say “Parking Lot Reserved for GM Products!” Of course all the cars in the lot are GMs, you’ve rigged the game!

People would be much more impressed if you didn’t have those parking rules and people still decided to stand behind your products. And you know how you make that happen? Build compelling cars. Then this won’t be an issue.

That’s really my main qualm with the parking rule: it shows a strong sense of self-consciousness. It tells everyone that if it weren’t for those signs, the lot would perhaps be filled with the competition. Where’s the confidence in that?

Now, I have no qualms with employees feeling compelled to support the home team; I appreciate that. And I also have no issues with employee discounts on cars. To me, so long as employees are given a choice of which car to buy, that’s totally fair.

It’s when employees are pressured into buying a product that I begin to have a beef, because what’s best for employees is for them to buy the best car for them, and that may not be a company-built vehicle. Maybe it’s that Subaru WRX in the picture above; the big 2.5 don’t make any car exactly like it (until the Focus RS comes out, anyway) so why punish employees for buying a car that excellent?

One of my friends didn’t buy the car he really wanted because he was afraid he’d hinder his advancement at the company. Would his colleagues look down on him for not owning an FCA product? That, coupled with the parking situation, made him change his mind.

Now he’s buying something that might not be the right car for him, and that’s a shame. There are so many things shoppers look for that expecting your company to build the car that is the absolute best for all individuals is naive and absurd and results in employees who might not buy the car that’s right for them.

Just Stop It, Will You?

What’s best for your employees is for them to buy the car that’s right for them, and if you want that to be your product, build awesome stuff.

That’s the key: build good cars, and your employees will buy them.