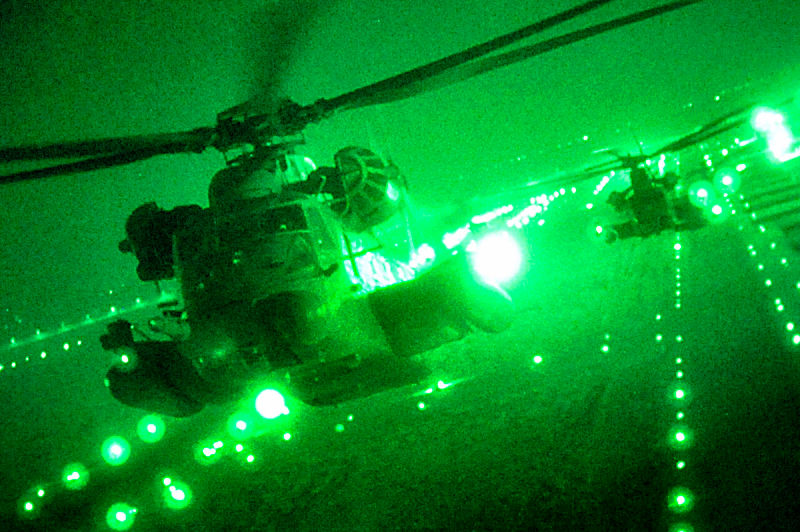 You have to kick down an enemy’s front door somehow, and in the case of Operation Desert Storm, a novel use of AH-64A Apache and MH-53J Special Operations Pave Low helicopters did just that for their fast-flying fighter jet comrades. The top-secret mission was dubbed Task Force Normandy, and it occurred 25 years ago today.

The thought that a critical portion of Iraq’s elaborate radar “fence” was blinded by helicopters seems strange in this day and age of stealthy standoff weaponry. But 25 years ago today, the choices for kicking open a hole in Iraq’s radar defenses weren’t so plentiful. The fact that these sites were located in the vast featureless desert along the border of Saudi Arabia and Iraq made the task even more challenging.

Originally, it was briefed to General Schwarzkopf, the larger-than-life four-star General that would head the war, that special forces would be deployed to the radar sites and take them out the old fashioned way by raiding them. Another plan had these operators laser-designate the sites for attack aircraft to strike. The General rejected these plans due to the inherent risk of ground forces being compromised by unforeseen factors.

Cruise missiles could have done the job, but nobody would have had eyes on the targets to make sure they were totally destroyed. It would have been disastrous if one of the sites were thought to have been destroyed, just for it to go back online while the skies were full of approaching coalition aircraft.

Instead, less traditional tactics would be required, ones where the strike force could make sure the radar sites were left in rubble. This new plan would be among the most tightly guarded secrets of the pre-war planning evolution.

At the time, there were few Global Positioning System units available in the field, and far fewer integrated into an aircraft’s navigational suite. The pinpoint navigation needed to find two Iraqi radar stations, located about 70 miles apart, without having the benefit of major landmarks or daylight, and all by surprise, left war planners to tap an unlikely team of helicopter crews to get the job done.

By the time planning was underway for Desert Storm, the Air Force Special Operations Command’s tricked-out MH-53J Pave Low III Helicopters had been outfitted with the most capable navigational suite on any aircraft in the world. It included GPS that would be as accurate over thousands of square miles of shifting sands as they were over a major city. They also featured terrain-following radars, forward-looking infrared flying aids and advanced threat detection and defensive systems. They themselves could make it to the radar sites without being detected, but they lacked the offensive punch needed to destroy them.

Now that a path-finding force was selected, a shooting force was needed to actually bring weapons to bear of the unsuspecting radar outposts. The obvious choice for this shooting force? The most advanced attack helicopter in U.S. service that was adapted specifically to fly and fight at night, the AH-64A Apache.

In the early fall of 1990, training began for this unique mission. Over the next few months no less than six live-fire drills were practiced to evaluate the Apache’s ability to take out the targets and the Pave Low’s ability to get them there. Timing was everything, both sites had to be hit at the same moment. If one went dark and the other could get a call off to command and control in Baghdad it could mean big trouble for fighter-bomber crews.

All the training occurred while deployed to Saudi Arabia for Desert Shield, the precursor to Desert Storm. The Air Force-Army team made up of the 20th Special Operations Squadron and 1st Aviation Regiment of the 101st Airborne Division worked out all the details, including speeds, altitudes, communication (which there really was none aside from glow-sticks dropped out of the MH-53s for position updates), and especially contingencies.

The plan was that each site would be struck by one of two teams, Red Team and White Team. These teams would consist of one MH-53J that would use its high-end navigational suite and terrain following radar to pave the way for each team of four Apaches.

These Apaches would be loaded with eight AGM-114 Hellfire missiles, 19 70mm hydra rocket pods, a full load of 30mm ammunition and a 1,700-pound, 230-gallon external fuel tank. The tanks had never been used before and were an innovation from the mission. Although they put the Apaches over gross combat weight, they would make it so they would not have to refuel in Iraq via a temporary forward refueling base. A stigma over such a tactic still remained since it was used with fatal consequences during Operation Eagle Claw, the doomed mission to rescue American hostages held in Iran over a decade earlier.

Additionally, a UH-60 Black Hawk would also be available for contingency search and rescue operations, and one spare Apache would be available if one of the prime force of eight Apaches had a problem before the infiltration into Iraqi airspace began.

About just a couple dozen miles from reaching their targets, the MH-53s would break-off and head to a future rendezvous point while the Apaches would update their navigation system one more time and make their final push to the radar sites. 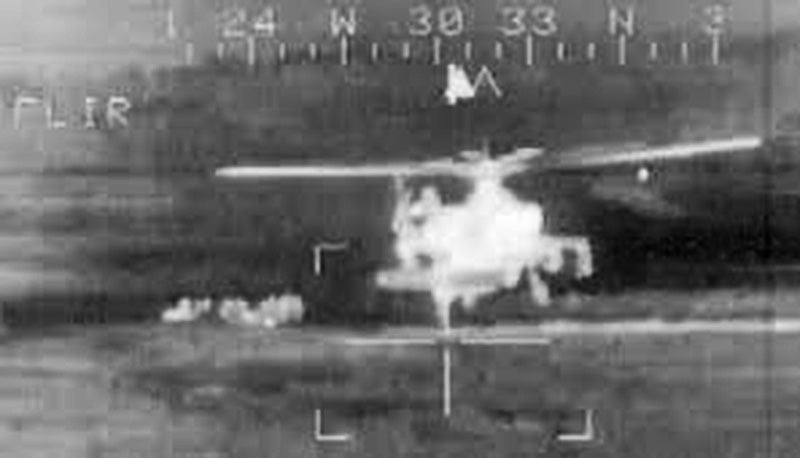 The plan had to go exactly as briefed, with missiles landing on the radar sites 22 minutes before H-hour, which was scheduled for 3AM. In doing so, a 20 or so mile wide corridor would be blown open in Iraq’s overlapping early warning radar network, and an initial strike force of F-15Es supported by EF-111 Ravens would pour in at low-level. They would be followed soon after by throngs of other fighter attack aircraft.

All involved would be tested to the max, flying a round-about route to their targets following the contour of the earth for long periods of time, much of which would be devoid of anything but sand. Even with night vision infrared optics, this would be no easy feat. Flying at 120 mph about fifty feet of altitude would be the operational norm for the mission, and since they had never flown over the terrain in question before, it would be all new to them.

Just a couple of days before the mission occurred, the force was forward deployed to Al Jouf Air Base, a small airfield in western Saudi Arabia. Even this had to be done in a stealthy manner as not to alert Iraqi intelligence. From there they would launch their assault in the coming days, should they be called to do so.

The assault was ordered for the night of the 17th of January, and the Pave Lows, with Apaches in tow crossed over into Iraq airspace at 2:12AM, just 48 minutes before H-hour was scheduled. Both teams made their way toward their targets, during which nothing out of the ordinary occurred. In fact, it was so calm, that it was almost alarming to the crews. Both Pave Low teams hit their last way-point upon which the Apaches broke-off to go start the war.

Both teams of AH-64 Apaches approached their radar station targets, and just outside of three miles they went into a hover and fine-tuned their targeting. The only communications sent during the entire infiltration were transmissions from the Apache forces shortly after simultaneously firing their first missiles. “Party in ten” was broadcast by the lead Apache pilots, the code for reporting the first impacts from their Hellfire were ten seconds from occurring.

Ten seconds later, power generator vans appeared as blooming white splotches on the Apache crews’ FLIR screens. What followed next was a barrage of weaponry and ammunition that obliterated the radar stations wholesale. The Apaches swooped ever closer as they kept firing their weapons. Anti-aircraft guns went up like fireworks, radar dishes were shattered into tiny pieces, Iraqis that could ran for their lives. In total 27 Hellfires, 100 rockets and 4000 rounds of 30mm ammunition were fired at the sensor outposts from what must have seemed like fire-breathing black holes in the night sky by the unfortunate souls on the receiving end of the attack.

The war had begun, and just minutes later, nearly 100 coalition fighters would barrel through the blind hole in Saddam’s radar defenses and onto their targets deep in Iraq. General Schwarzkopf later remarked that the Apaches “plucked out the eyes” of Iraq’s border defenses.

On their way back toward the Saudi border, as both teams of Apaches rejoined with their Pave Low teammates, they radioed simply “Nebraska AAA” and “California AAA.” This meant that the generators were knocked out, the sites were obliterated and there were no friendly losses. It was a clean sweep.

Still, the mission was not over, as they made their way back towards the border, low-flying fighters screamed overhead in the opposite direction. There were some fears that a mistake could be made and that these jets could see the comparatively slow-flying helicopter force heading in their opposite direction as an enemy one.

This did not occur thankfully, but Iraqi ground units were now aware that something big was happening. SA-7 shoulder-fired heat seeking missiles were fired on the Pave Lows, although their defensive countermeasures and hard maneuvering worked to evade being struck by them. In the end, everyone returned unscathed.

The historic and highly successful Task Force Normandy remains one of the best examples of applying unique military capabilities to a challenging target set in a creative way. Not only that, but the fact that the first shots of Desert Storm were fired by helicopters is a testament to rotory-wing air power and just how flexible it can be with the right vision.