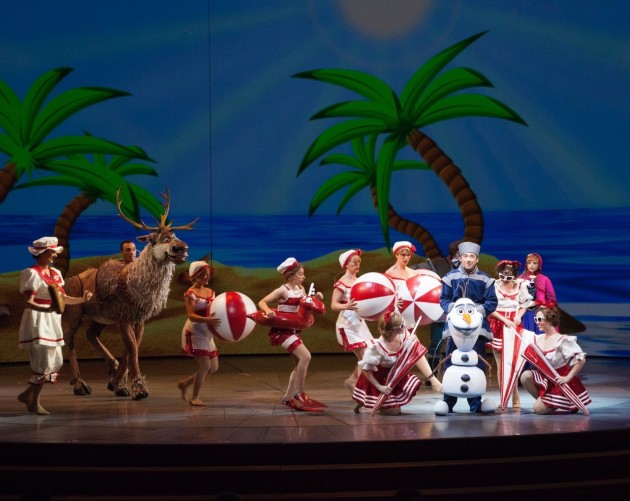 Frozen – Live at the Hyperion is a brand new theatrical interpretation of the animated film beloved by children and adults around the world. While Disney is working on a Broadway version that will premiere some time next year, this is a Disney Parks take on the film.

I will admit, I am not the greatest fan of the film Frozen. So when Disney invited us to check out the new show, I had my doubts. I was wrong, Frozen – Live at the Hyperion is simply great.

A show of this nature has to check-off a handful of items to please the audience. It needs to include the songs showgoers love. It needs to have the ability to retell a story that is already familiar, and it has to place the audience in an immersive environment that makes them feel engulfed within the performance. I think all of those boxes were checked, and then some.

Yes, you’ll get most of the songs from the movie but, really, the creative team behind the show did a phenomenal job of picking out the best parts of the movie and squeezing them into a shorter, dare I say, more enjoyable, experience. The beginning moments of the show seem a bit rushed but, if you’ve seen the movie, you really don’t need the extra bits to know that Elsa has magical powers.

Right smack in the center of the stage is a 4 million pixel, 2,200 square foot video wall that magically and beautifully brings the world of Arendale to life. The 44,000-pound video screens are so heavy that they needed separate reinforcing. Additionally, the stage is shrouded with 45,000 sq. ft. of “Aurora” colored fabric that also doubles as projection screens. They’ve all been placed in a way where it creates this forced perspective/tunnel type effect that gives a much more immersive feeling, especially during one of the more action-filled scenes. We’re told it takes over 80 computers to render all the projections, video screens and lighting effects.

In some cases, the performers have LED diodes built in to their costumes that allow projection effects to map on to their costumes. Think of it like a smart spotlight except, in this case, it’s a projector that follows to performer to pull of a transitional effect. It works and it is really neat to see.

I’m always fascinated with how shows of this nature are able to not only retell a familiar story in a way that feels fresh. Considering the original film was animated, not everything from the movie can easily translate to a live-action format. There’s no CGI, bluescreen or cinematographer’s tricks to mask effects. In some cases, you’re just inches away from the action. Kudos for the creative team to be able to pull off this task.

The music scoring is really well done and the cast is phenomenal. I was particularly wowed by the ability of performers who, seemingly born for the roles they were playing, could belt out bigger-than-life songs with ease. The emotional moments and comedic timing were spot on, too. You could hear audience members laugh and sniffle as they were holding back tears. There’s no greater compliment you could pay to the actors, crew and director than shedding a tear at a beautiful performance. Well done, Disney.

Frozen – Live at the Hyperion is playing now at Disney California Adventure in Anaheim, California.