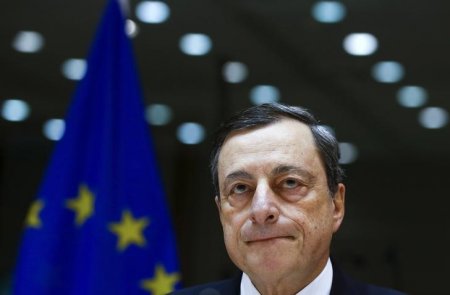 BRUSSELS/FRANKFURT (Reuters) – The European Central Bank is ready to ease policy in March if the recent financial market turmoil or the long-term impact of low energy prices threatens to keep inflation persistently low, its president Mario Draghi said on Monday.

“First, we will examine the strength of the pass-through of low imported inflation to domestic wage and price formation and to inflation expectations,” Draghi told the European Parliament’s Economic and Monetary Affairs Committee.

“Second, in the light of the recent financial turmoil, we will analyze the state of transmission of our monetary impulses by the financial system and in particular by banks,” Draghi said. “If either of these two factors entail downward risks to price stability, we will not hesitate to act.”

Draghi’s comments come after weeks of heightened market volatility, which has reversed much of the impact of the ECB’s December easing, increasing pressure on the bank to ease further in March.

Indeed, Draghi has already said the bank will review and possibly recalibrate its policies when it meets on March 10, a strong signal taken by markets as an almost certain commitment to act.

The euro has firmed 3 percent since the start of the year, cutting imported inflation while euro zone stocks are down 13 percent, increasing funding cost for firms.

But perhaps more importantly, the 22 percent fall in banking shares could raise the cost of capital for banks, potentially holding back lending and reducing the effectiveness of the ECB’s quantitative easing.

“The situation in the banking sector now is very different from what it was in 2012,” Draghi said. “Perhaps most importantly, euro area banks have significantly strengthened their capital positions over the past few years, notably as a consequence of the Comprehensive Assessment conducted in 2014.”

However, some banks still face challenges, ranging from uncertainty about litigation and restructuring costs to a high stock of non performing loans, Draghi added.

Draghi said the ECB was ready to do its part but also called on governments to help out by with supportive fiscal policies that lift public investment and help economies through lower taxation.

In December, the ECB cuts its deposit rate by 10 basis points to -0.3 percent and extended its asset buying program by six months, taking the program to 1.5 trillion euros.

Markets now price-in at least two rate cuts, taking the deposit rate to -0.50 percent by the end of the year from -0.3 percent. But analysts are more cautious, expecting just one rate cut to -0.4 percent.