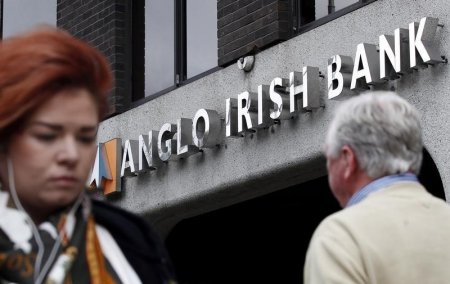 DUBLIN (Reuters) – The former head of Anglo Irish Bank was formally charged on Monday on 33 counts relating to the collapse of the failed lender, appearing in an Irish court for the first time since his extradition from the United States.

David Drumm, 49, who had been held in federal custody since U.S. officials arrested him at his Boston home in October, arrived in Dublin in the early hours of Monday morning after agreeing last month to return to his native Ireland.

Irish officials sought his return to face charges that include forgery, conspiracy to defraud, provision of unlawful financial assistance, false accounting and falsification of loan facilities.

Some of the offences carry a maximum sentence of 10 years, the court was informed.

Ireland’s Director of Public Prosecutions (DPP) and police fraud squad opposed a request for bail on the grounds that Drumm was a flight risk. Drumm moved to Boston after resigning from the bank in December 2008, a month before it was nationalized.

Fraud squad Sergeant Michael McKenna told the court that Drumm had deliberately placed himself beyond the reach of investigators and that it was only after being refused bail twice in the United States that he had decided to consent to his extradition.

Judge Michael Walsh was due to decide on the bail request later on Monday. Drumm denied any wrongdoing during the extradition proceedings.

Anglo, the bank at the heart of a financial crisis triggered by the casino-style lending that drove Ireland’s “Celtic Tiger” boom, was put into liquidation in 2013.

Its failure cost taxpayers 30 billion euros ($33 billion), equivalent to around 15 percent of Ireland’s annual economic output and almost half the 64 billion euros Dublin had to pump into its banks to save the entire sector from collapse.

The bulk of the charges relate to the unlawful provision of loans to a group of 10 people dubbed the “Maple Ten” and to the family of former billionaire businessman Sean Quinn in 2008 to enable them to buy shares in the bank, boosting its stock price.

The loans were used to help Quinn unwind a 29 percent stake in Anglo built up via contracts for difference, instruments that do not have to be publicly declared. The bank feared that a potential disorderly unwinding would put it in jeopardy.

Other charges relate to a temporary deposit of 7.2 billion euros by former bancassurer Irish Life & Permanent into Anglo shortly before the end of the bank’s financial year.