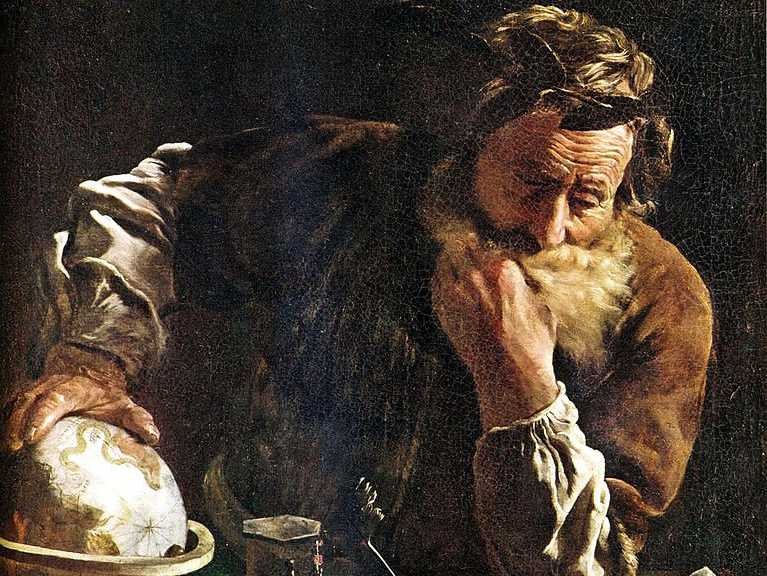 π is one of the fundamental constants of mathematics: the ratio of a circle’s circumference to its diameter.

π is an irrational number — it can never be written as a fraction of two whole numbers, and it does not have a terminating or repeating decimal expansion. The decimal expansion of π goes on forever, never showing any repeating pattern. Since π is irrational, all we can ever hope to do is get better and better decimal approximations.

So, how did the ancients first approximate π?

The Greek mathematician Archimedes developed one of the first somewhat rigorous approaches to approximating π. Archimedes observed that polygons drawn inside and outside a circle would have perimeters somewhat close to the circumference of the circle.

The perimeter of the inscribed blue hexagon has to be smaller than the circumference of the circle, since the hexagon fits entirely inside the circle. The six sides of the hexagon all have length 1/2, so this perimeter is 6 × 1/2 = 3.

Similarly, the circumference of the circle has to be less than the perimeter of the circumscribed red hexagon, and this perimeter is 6 × 1/√3, which is about 3.46.

Archimedes’ method of approximating π with polygons, and similar techniques developed in China and India, would be the dominant way mathematicians would approach the calculation of the digits π for centuries.

Today we use algorithms based on the idea of infinite series from calculus, and our ever-faster computers allow us to find trillions of digits of π.

SEE ALSO:The Only 8 Numbers You Need To Do Math