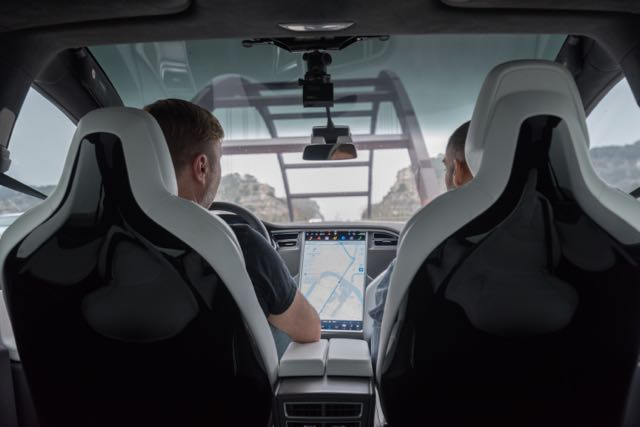 Cars and Coffee is typically so boring that going there just to look at cars quickly loses its appeal after about thirty seconds of hanging around a parking lot where you can admire ten of the exact same Audi S4s only so much. If something you never see—like a McLaren P1—isn’t at the event, there’s not much of a reason to stick around.

I recently ran into a friend who told me about Matt and his newly obtained Telsa Model X. But Matt’s Model X wasn’t even a regular one—as if such a thing could exist. It happened to be an exclusive version of an exclusive Model X: a founder’s edition to be precise.

You might be wondering how anyone could possibly get a hold of a limited founder’s edition: who does Matt have to know to be able to get one? Bill Gates? Oprah? Or—is Matt Elon Musk’s brother?

It turns out that, although, Matt didn’t have to know anyone special, he did have to pull off something pretty spectacular. You see, there was a referral program going on a while ago, where if you could get 10 people to buy a Tesla Model S within three months, you would be able to get your hands on a fully loaded founder’s edition model X discounted by almost $40,000. Matt managed to convince not just ten, but 12 people to buy one which equates to selling a million dollars worth of cars in three months! And because of that, he is now the proud owner of a fully loaded Model X that he obtained at a discounted price of only about $100,000.

Hey, how come I didn’t know about this? I would’ve totally…wait a minute. Not only do I not know 10 people (I know two), a $40K discount wouldn’t mean much to me because that means I would still have to spend $100K that I don’t have on a car!

Matt’s Model X is one of the first ones I’ve seen in Austin and when you first lay eyes on the vehicle, it essentially looks like a pumped up, bigger version of the Model S. But then you have a “No way, that’s so cool” moment as soon as the massive rear falcon doors dramatically lift up towards the sky. Watch the video below to see it in action.

The Model X comes with a Model S-shaped remote that has a bunch of buttons that after double-clicking open up all kinds of doors on the car. Then something interesting happens. If you have the front door open and walk away from the vehicle with the remote on you, the door shuts automatically. There is no lock or unlock button on the remote; all that happens by itself depending on how close the remote is to the car.

Once you’re in the car, there’s no start button. You just hit the accelerator to start moving. As long as the remote is nearby, the car is operational which begs the question: what happens if you lose the remote? There is no mechanical way to enter into the vehicle, as far as I could tell, so I suppose your only option is to call Elon Musk who will then send you his helicopter to pick you up. You have the “founder’s” edition so naturally he should provide you with 24/7 personal roadside assistance.

Inside the car you’ll find a huge vertical screen, similar to what’s in the Model S, but even bigger. There are no physical buttons and everything is controlled through the touch screen which works remarkably well and is super responsive. Playing around on that thing feels like interacting with a giant iPad that controls most of the Model X’s features and functionality. The first thing I wanted to do, of course, was to test the Model X’s web browsing capabilities by immediately going to www.torqueaffair.com.

After that, I got settled in with my popcorn to watch cats attacking alligators by loading YouTube on a screen that’s bigger than my monitor at home. Unfortunately, it turns out that Tesla has disabled playing YouTube videos in the car which is probably a good thing for now. I’m sure they will be re-enabled once the Model X is fully autonomous. Then I can finally sit back, eat my Wendy’s cheeseburger, slurp my supersize drink and watch Trump build a wall as the Model X drives me towards Canada.

On the gigantic iPad, there are so many things you can do like open the rear Falcon doors, warm the rear seats, time travel, change the ride height, switch the driving mode into ludicrous (which Matt always keeps the X in—all other modes are pointless anyway) and control a variety of operational aspects of the Model X.

Surprisingly to open the front doors you still need to pull on a latch—wait, what? After virtually eliminating all vestiges of manual labor and leaving everything to a simple touch, Tesla expects me to manually open the door?

The front windshield is kind of panoramic but not fully because it ends right above your head. Because the rear Falcon doors need to lift straight up, the entire roof couldn’t be made of glass. But that was fine with me, because making compromises to fit in the rear doors are completely worth it.

The Model X in many ways seems to be a fantasy vehicle that Elon Musk dreamed up. Clearly, he packed it with fun technology which are awesome and unnecessary like having doors flying up instead of opening sideways. I’m sure his engineers were driven to tears and had to leave their families trying to make the doors work properly. Musk is a visionary guy building spaceships and so you can expect his cars to be extraordinary and his employees to be miserable.

Because of all the features and gizmos, the newest Tesla is way out of the price range for the majority of people who need an SUV like this. The Model X can only be a reality for people who have the kind of money to spend on a vehicle that is designed to make a statement about the future of the automotive industry—something that I’m sure is adored by Silicon Valley billionaires.

As Matt and I got ready to head out to Cars and Coffee, I sat there smugly feeling like a Silicon Valley billionaire, with only a billionth of their net worth. On the drive over to the event, the Model X got tons of appreciative glances from folks on the road, with the most joyful and loving looks given to us by a family in a BMW i3.

Once we arrived at Cars and Coffee, the Model X was a hit. People immediately started walking over, ogling this new Tesla creation. Adults and kids alike were fascinated with the vehicle. Matt allowed all kinds of folks to sit inside and touch things. Everyone loved touching the Tesla. People squeezed themselves into the 3rd row seats, took selfies, and played with as much stuff as they could. There was a point where it got a bit ridiculous because the Model X wasn’t a dealer model but people were treating it as such. Eventually, we got tired of everyone and left in the Model X that now contained the fingerprints of a thousand people.

On the way back from Cars and Coffee, I got a chance to get behind the wheel of the Model X. It was silky smooth, ultra luxurious and super quiet. The materials, fit and finish were outstanding and exactly what you would expect in a high-end, high performance SUV. You do realize right away, though, that the SUV is a big vehicle and so you’re not inspired to throw it around turns even though it could probably handle them much better than other SUVs of the same size due to its unique low center of gravity.

While you’re driving, you can’t help but slam the accelerator pedal down as often as you can. It hits 60 mph in 3.2 seconds and even in the rain, the 6000 lb Model X moved faster than any other SUV we have in existence. The traction control works so well that I wanted to accelerate at every opportunity and somehow the tires managed to stick and propel us forward on slippery roads.

With each pedal-mashing session, the SUV lurched forward with 700+ lb-ft of instant torque with everyone in the car getting pinned to their seats like in a roller coaster. During the intense acceleration, all you hear a muffled whirring of the motors.

This was my first time to experience Tesla’s autopilot and although not perfect, was a cool thing to experience. In a straight line, the Tesla had no problems reading the lane markers and staying within a lane, using ultrasonic sensors to detect other cars. When taking sweeping turns, the steering was a bit jerky and lacked smoothness although I’m sure improvements will come with future software updates. It’s kind of crazy to think that Tesla can continually improve the autopilot/self-driving features of the car with a simple software update just like on your phone. One simple restart followed by a lock-up followed by two more restarts.

Wonder what a “locked up” Tesla would look like—would a malfunctioning Model X start randomly opening and closing all its doors? Or would it run into your next-door neighbor’s tree?

There is still work to do before the autopilot can recognize red lights and intelligently avoid obstacles on the road so that you can peacefully take a nap. Even still, it’s impressive to think how far this technology has come. Only 8 years ago, Tesla almost didn’t make it when Elon Musk came very close to shutting down either Tesla or SpaceX to keep at least one of the two companies alive. And now this—a futuristic, technological marvel—the Model X.

Besides autopilot, Matt also demonstrated the “summon” feature of the Model X. By using your phone, the car can move forwards or backwards and can open or close a garage door. It’s much better to see it in action than to read about it so be sure to check out the video. It was a bit strange to see a vehicle of that size functioning by itself without anyone in it.

I wonder if someone could hack the “summon” feature and turn it into “attack” and then use the Tesla to run over things. Imagine roads full of Teslas that have gone berserk, destroying everything in their path. Not a completely implausible scenario.

At $140K for a loaded version, the price is steep, but then again Tesla is a company that is bound and determined to do great things and disrupt the auto industry in a way that’s never been done before. After spending some time in the Model X, Elon Musk’s prediction of having a self-driving car on the road in two years might just be a reality. We are not as far off as I initially thought.

Just like smartphones have changed our lives, in that, we now have permanently curved necks and would rather text than talk to someone standing right in front of us, self-driving cars will allow us to turn into physically useless beings as we continue to shove more fries into our face and leave even more idiotic comments on the internet instead of driving.

I can’t wait to see how it all turns out.