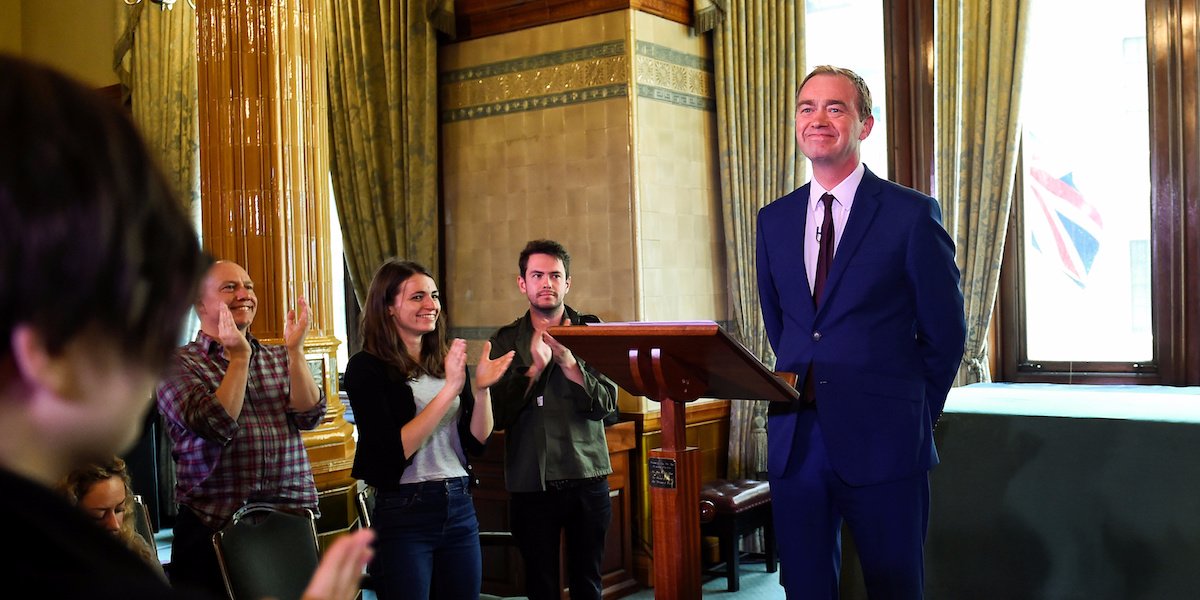 LONDON — The Liberal Democrats are looking for a new leader after Tim Farron resigned over his deeply-held religious beliefs on Wednesday evening.

Farron — who was elected the party’s leader in July 2016 — said it felt “impossible” to continue as leader of the Liberal Democrats “living as a faithful Christian”.

“To be a political leader – especially of a progressive, liberal party in 2017 – and to live as a committed Christian, to hold faithfully to the Bible’s teaching, has felt impossible for me,” he said in a statement.

A Lib Dem source told Business Insider that senior figures in the party had told Farron there would be no challenge to his leadership as early as yesterday.

However, Farron’s surprise departure followed the resignation of the party’s Home Affairs spokesman, Lib Dem peer Brian Paddick, earlier in the day. Paddick said he had left over Farron’s beliefs on homosexuality.

Now the Liberal Democrats are on the hunt for Farron’s successor, with a handful of party figures being tipped to challenge for the vacancy. Here are the people we believe are most likely to take over. A popular figure in the party and favourite to succeed Farron for many insiders is MP Jo Swinson.

The 37-year old MP won back her East Dunbartonshire seat in Scotland from the SNP at last week’s election and is widely considered to be one of the party’s finest talents. She boasts ministerial experience, having served as both junior Equalities Minister and Parliamentary Under Secretary of State for Employment relations, consumer and postal affairs. She was the youngest MP to sit in the House of Commons from when she was first elected in 2005 until 2009.

A number of Lib Dem sources have told Business Insider that Swindon is a popular choice within the party to take over. If elected, she would also become the party’s first ever female leader. You’d be foolish to write off the chances of Lib Dem grandee Vince Cable, though.

A well-placed source within the Lib Dems told Business Insider that the former Business Secretary’s experience makes him the most obvious choice to succeed Farron, despite heavy speculation that Swinson is the strong favourite.

Another source told BI that Cable might well serve as an interim leader until Swinson “has her feet back under the table.”

There’s no doubt that Cable is the most seasoned figure in the running. He served as the MP for Twickenham from 1997 until 2015 and won back the London seat from the Conservatives at Thursday’s general election. He was chosen to head the Department for Business, Energy and Industrial Strategy during the David Cameron-led coalition government, and has served both as acting and deputy leader of the Liberal Democrats. He was knighted in 2015. Norman Lamb MP lost out to Farron in the party’s last leadership candidate but polled well at 43.5%. The MP for North Norfolk is well-respected among party members and expected to throw his hat in the ring this time around.

Lamb served as parliamentary private secretary to former Deputy Prime Minister Nick Clegg and in 2012 was promoted to junior minister in the Department for Business, Innovation and Skills under the Tory-Lib Dem coalition.

He was one of two Lib Dem MPs who decided to disobey party orders and vote in favour of Theresa May triggering Article 50 of the Lisbon Treaty earlier this year. It’ll be interesting to see if this bears any impact on his chances.