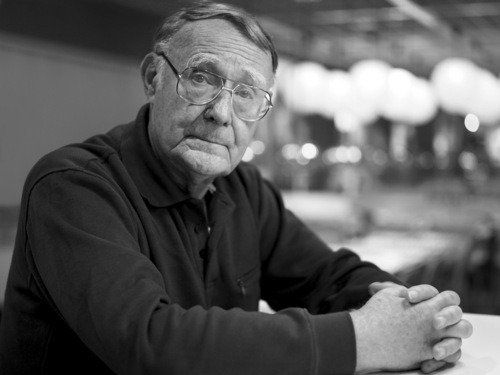 Ingvar Kamprad, the Swedish business magnate who founded IKEA, turns 90 today. Employees celebrated with cake at the company’s headquarters in Sweden, according to one of IKEA’s designers.

Kamprad started IKEA more than 70 years ago, and today the beloved brand is the world’s largest furniture maker. Though he no longer actively manages the company — one of his sons serves as chairman — he remains a senior adviser.

With an estimated net worth of$39.3 billion, Kamprad ranks as the 10th-richest person on earth and the second-richest in Europe. Still, Kamprad is considered one of the world’s most frugal billionaires.

The 90-year-old grew his flatpacking-furniture brand by maintaining a personal and professional ethos of innovation and simplicity.

From humble beginnings selling holiday tchotchkes to his neighbors as a child, Kamprad started a revolutionary, privately held furniture giant with $33 billion in sales — and became one of the richest people on the planet in the process.