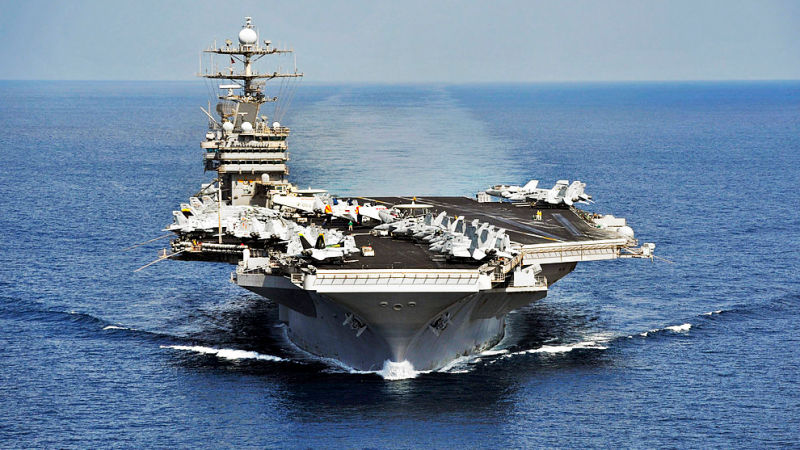 An Iranian rocket landed just 1,500 yards off the starboard side of the the Nimitz Class super carrier USS Harry S. Truman during its recent transit through the Straits of Hormuz, serving as another reminder of how easily things in the Persian Gulf could go from a tense calm to a shooting war with Iran.

The carrier, along with the cruiser USS Buckley and a French frigate, were nearing the end of their transit through the straits when suddenly the Iranian Revolutionary Guards came on the radio saying they were executing a small boat rocket firing exercise. The aircraft carrier and escorts had no time to deviate from their course. Even if they had, there is little room in the narrow and crowded Strait for evasive action.

NBC News reports that officials were quick to downplay the event, saying that the rocket was not fired at the carrier, only near it, and then goes on to say that the move was an unnecessary provocation and unsafe.

It is unclear exactly what the rules of engagement are under these types of circumstances, although being fired upon should clearly be grounds for return fire. It is likely that the commander made the call not to react at the time, although this call may have not been a clear one to make. It all depends on where the fast-boat was when it launched the rocket in relation to the carrier and the path rocket traveled before landing in the water.

Another unanswered question is what were the state of the ship’s close-in defenses at the time of the launch. 1500 meters is well within their reach, it just depends on what mode they were in (if they were activated at all) and what the trajectory of the missile was.

In the end it is a good thing we are not currently at war with Iran over a rocket that fell into the sea—but the question remains: what was the Revolutionary Guard’s aim with executing such a provocative act? Sure it was a reminder of how vulnerable America’s ships can be while passing through the “fatal funnel” that is the Straits of Hormuz, but is sending a reminder worth the possibility of a shooting war?

The Straits of Hormuz has long been one of the world’s most notorious hot spots. Just last May, U.S. Navy ships had to escort American flagged vessels through the Straits of Hormuz after Iranian gunboats seized the Maersk Tigris. Since then the area has been relatively quiet.

It is no secret that the Iranian military detests American aircraft carriers operating in the Gulf, and has built an extensive battle doctrine around attacking one. Maybe the Iranian leadership has now decided that the Obama Administration has too much at stake in the region, especially in regards to the Iranian nuclear deal, and will be unwilling to risk a confrontation due to harassment by IRGC forces.

These types of incidents are known to work as something of a pressure-valve for keeping hardliners in the Iranian government and military satisfied, even while Iran has openly engaged in dialogue with the U.S. at the same time. It could also be a sign of something much more sinister. Either way, this single rocket may be the beginning of increased harassment by Iranian vessels operating in and around the straits.

The USS Harry S. Truman has since made its way safely to its station in the Persian Gulf alongside the French carrier Charles De Gaulle and has begun executing airstrikes against ISIS in Iraq and Syria.