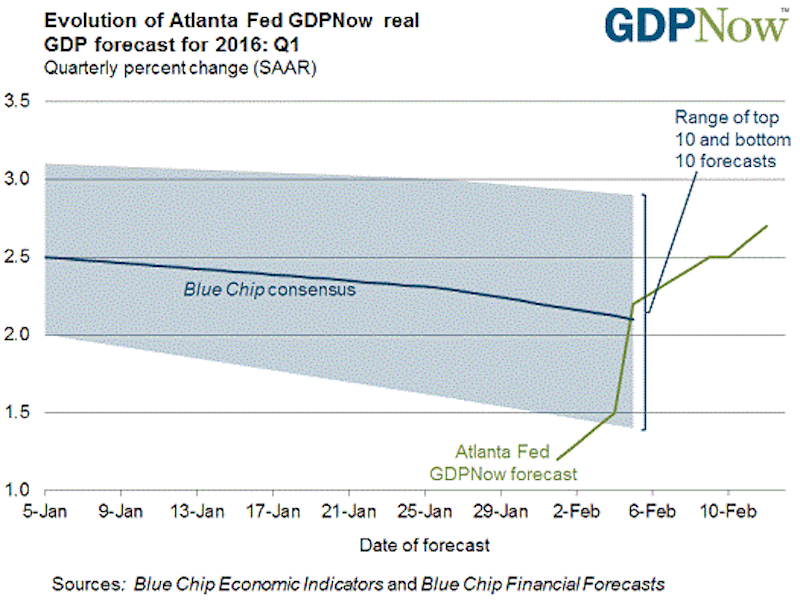 US economic data releases were sparse this week, but the few indicators we did get confirmed the US economy is not on the brink of recession.

Consumer spending is the driving force of economic growth, as consumption makes up two-thirds of gross domestic product (GDP).

And the first big reading on consumption for 2016 — the January retail-sales report — showed that spending is not rolling over.

Retail sales rose 0.4% compared to December, and 0.1% excluding the volatile costs of autos and gas. Both increases were more than forecast. The retail-sales control group, which is what matters for GDP calculations, jumped by an unexpected 0.6%.

Over the last few weeks, concerns had mounted that the recent market turmoil would soon dampen consumer confidence and spending.

But consumer sentiment remains at a relatively elevated level, even after the unexpected drop in the University of Michigan’s index to 90.7. And as TD Securities’ David Tulk argued in a note to clients, it’s still too soon to tell whether the sell-off in stocks will be followed by an economic downturn.

A downturn in stocks can be a leading indicator of economic activity but doesn’t serve as one on a consistent basis.

Federal Reserve Board Chair Janet Yellen also agreed with this, saying this week that concluding an economic recession is close is a premature move.

“There would seem to be increased fears of recession risk that is resulting in rises in risk premia. We have not yet seen a sharp dropoff in growth, either globally or in the United States. But we certainly recognize that global market developments bear close watching.”

Yellen noted that while there’s room for improvement in the labor market, it has already come a long way since the financial crisis. Although the weekly series can be volatile, “the claims data continues to suggest that the labor market is grinding towards full employment,” Jefferies’ Thomas Simons wrote in a note to clients.

Meanwhile, consumers who already have jobs are shifting between jobs at an unprecedented rate.

We learned this week that the quits rate — one of Chair Yellen’s favored indicators — was 2.1% in December, the highest since April 2008.

“While markets have given up on rate hikes in 2016, real data thus far is not as scary as the red screens suggest. Take this week’s release showing that three million Americans quit their jobs in December, the highest in nearly a decade. The quit rate, a Chicago Fed paper points out, has a 94 per cent correlation with the Employment Cost Index six months hence. Their historical relationship points to wage growth accelerating to three per cent later this year.” And so going by this argument, we could expect that the big laggard of the labor-market recovery — wage growth — to be on the verge of an acceleration that would benefit consumer spending and the economy.

Several economists are now betting on a broad rebound in growth after the fourth-quarter slowdown.

Notably, the Atlanta’s Fed closely followed GDPNow tracker raised its estimate for Q1 GDP twice this week. First, after a report Tuesday that showed inventories rose less than expected in December, and then after the retail-sales data.

The Atlanta Fed’s model now forecasts first-quarter GDP will expand at a pace of 2.7% as the expectation for real consumption rose to 3.2% from 3%. That would be a solid rebound from the advance estimate of 0.7% in Q4, and 0.6% in the first quarter of 2015.

Other major tracking estimates are calling for higher growth, including Barclays (+2.5%), Goldman Sachs (+2.1%), and Morgan Stanley (+1.5%). Wall Street’s average forecasts see growth in every quarter out through the first quarter of 2017, according to Bloomberg.

And if it will take three successive quarters of contraction to trigger and official recession, it’s safe to say we’re simply not there yet.

SEE ALSO:Barclays outlines how to invest during a recession but doesn’t recommend doing it right now