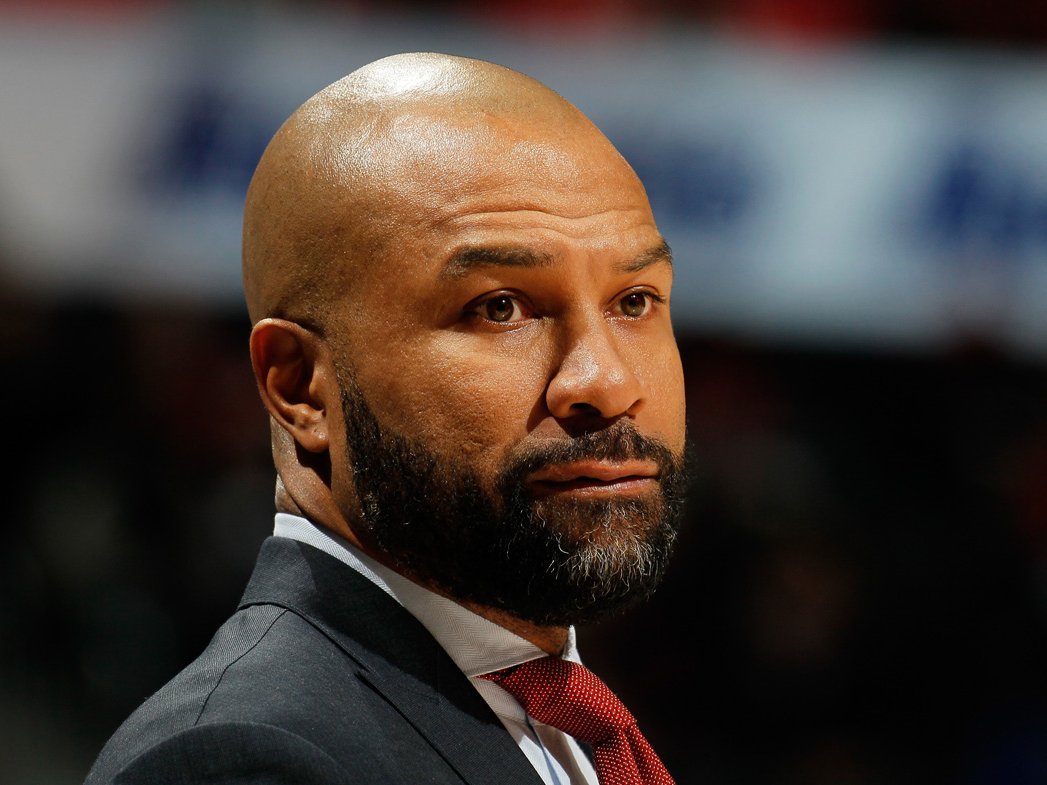 The New York Knicks announced on Monday that they fired head coach Derek Fisher after less than two seasons.

After a franchise-worst 17-65 season last year, the Knicks are 23-31 this year, but have lost five games in a row and nine of their last ten.

The decision came as a shock to the NBA world because Fisher’s job seemed safe as he was hand-picked by Knicks president Phil Jackson, given a five-year, $25 million contract, and viewed as a developing coach to guide the Knicks through their rebuild.

However, in the aftermath of the firing, it’s clear that there were three big factors that led to Fisher’s firing: Fisher’s dust-up with Grizzlies forward Matt Barnes early in the season, the Knicks’ surprisingly competitive start, and his approach to Phil Jackson’s triangle offense.

The first was an odd incident that surfaced during the preseason. Barnes and Fisher reportedly had an altercation at Barnes’ ex-wife’s house in California after Barnes received an alarming call from his children while Fisher, who dates Barnes’ ex-wife, was at the house. Barnes showed up and the two had an altercation, reportedly initiated by Barnes, which later led to Barnes being suspended for two games by the NBA. Fisher didn’t receive any punishment.

While the incident largely blew over, it seems that it had deeper effects on the team.

The beginning of the end for Derek Fisher was his situation with Matt Barnes. Needless to say, that did not go over big in the locker room.

You could throw last year out, but starting off this year with the embarrassing incident with Matt Barnes wasn’t a good look for Fish

Jackson addressed the media after Fisher was fired and admitted, “No one’s happy about that. It was embarrassing for us and Derek,” though he also added, “but that had nothing to do with what’s happened here today.”

Still, such a strange incident happening at the onset of a new year set an awkward tone, and it seems to have affected Fisher’s relationship with players.

More importantly, however, ESPN reports that Fisher wasn’t developing as a coach quick enough for Knicks management. Some of that pressure may have been because the Knicks, for stretches, looked like a playoff team. Yet in the midst of a rough patch, Fisher, during an interview, said missing the playoffs wouldn’t be a “disappointment.”

“No. Disappointed in what?” Fisher said in an interview on ESPN radio. “We’re a developing team with a ton of new players. … We have to be reasonable about who we are and where we are and accept what is and not get caught up in what we should be and allow other people to define what our success is.”

During the Knicks’ best stretches this season, they’ve looked like a flowing, clicking offense with a passable defense. Carmelo Anthony was playing his best, most unselfish basketball, and players like Kristaps Porzingis, Arron Afflalo, Robin Lopez, Derrick Williams, and others were providing needed scoring, energy, and defensive boosts. Several stretches of strong play saw the Knicks get back into playoff contention, most recently in January with a 22-23 record.

After this current stretch, Knicks management thought Fisher wasn’t progressing as a coach, and they reportedly weren’t pleased with his admission that the Knicks might not be a playoff team. Kurt Rambis, who is now the interim coach, sang an entirely different tune on Monday when speaking to the media.

Rambis: “That’s my goal. To get this team in the playoffs.” Wow. Big change from Fisher rhetoric.

Furthermore, it seems Knicks management was upset with Fisher’s lack of commitment to the triangle offense. Wall Street Journal’s Chris Herring reported that while Rambis addressed the media, he said the Knicks’ recent struggles are partly due to “lackluster” triangle mechanics.

Furthermore, Yahoo’s Adrian Wojnarowski reported that Derek Fisher’s forays away from the triangle also contributed to his firing.

“Phil Jackson continues to want to build this organization around the triangle offense,” Wojnarowski said. “And part of also what undid Fisher’s tenure was Jackson at times thought [Fisher] went too far away from [the triangle].”

There were other factors, too — Fisher struggled mightily with forming a steady rotation, the Knicks often flailed down the stretch in close games, with a lack of creativity on offense, and Wojnarowski said players grew upset with their roles.

However, Jackson took the Knicks’ president job with the intention of creating an entire cultural overhaul, installing a system and culture that would permeate throughout the organization. It seems Fisher, at times, strayed from that with an embarrassing off-court foible and an unwillingness to commit entirely to Jackson’s preferred method of playing. As a result, Fisher’s tenure was cut drastically short, and the Knicks are once again pivoting in a new direction.