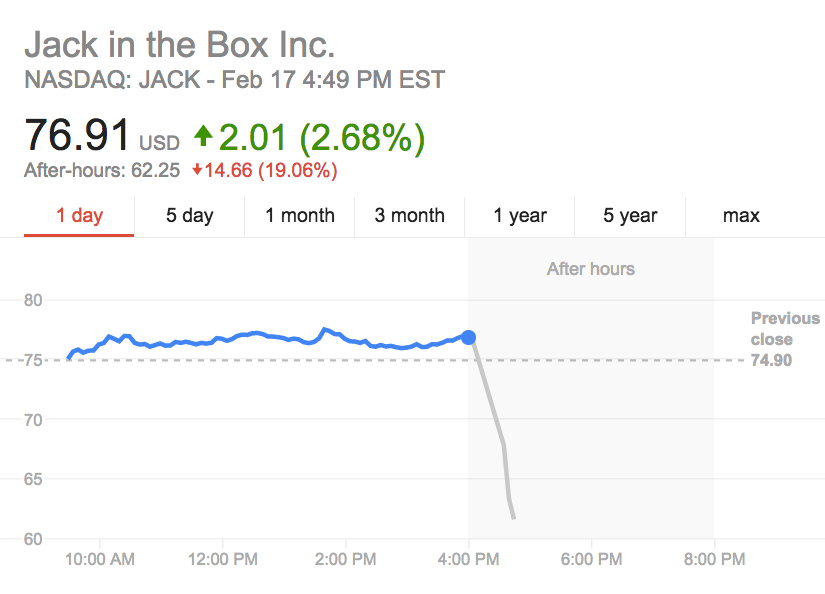 Shares of fast food chain Jack in the Box are getting smashed after the company posted lower than expected earnings Wednesday afternoon.

The company reported earnings per share of $0.94 for the fourth quarter, up from the year before but missing analysts estimates for earnings of $1.03. Revenue also missed, the company generated $470.8 million against estimates of $475 million.

The company has two major franchises, burger restaurant Jack in the Box and Mexican fast-casual Qdoba.

According to CEO Lenny Comma, Jack in the Box sales were weaker than expected due to competitors value offerings.

“Jack in the Box sales in the last part of the quarter were lower than we anticipated as several competitors began promoting aggressive value offers,” he said in the release. Comma also highlighted weak breakfast sales as another headwind to Jack in the Box.

Both of these are of note as McDonald’s launched its all-day breakfast and its new McPick 2 for $2 value offering in the latter parts of 2015.

According to Comma, Qdoba sales were up but offset by a higher than normal advertising spend. SEE ALSO:T-Mobile made up a drinking game for its earnings conference call