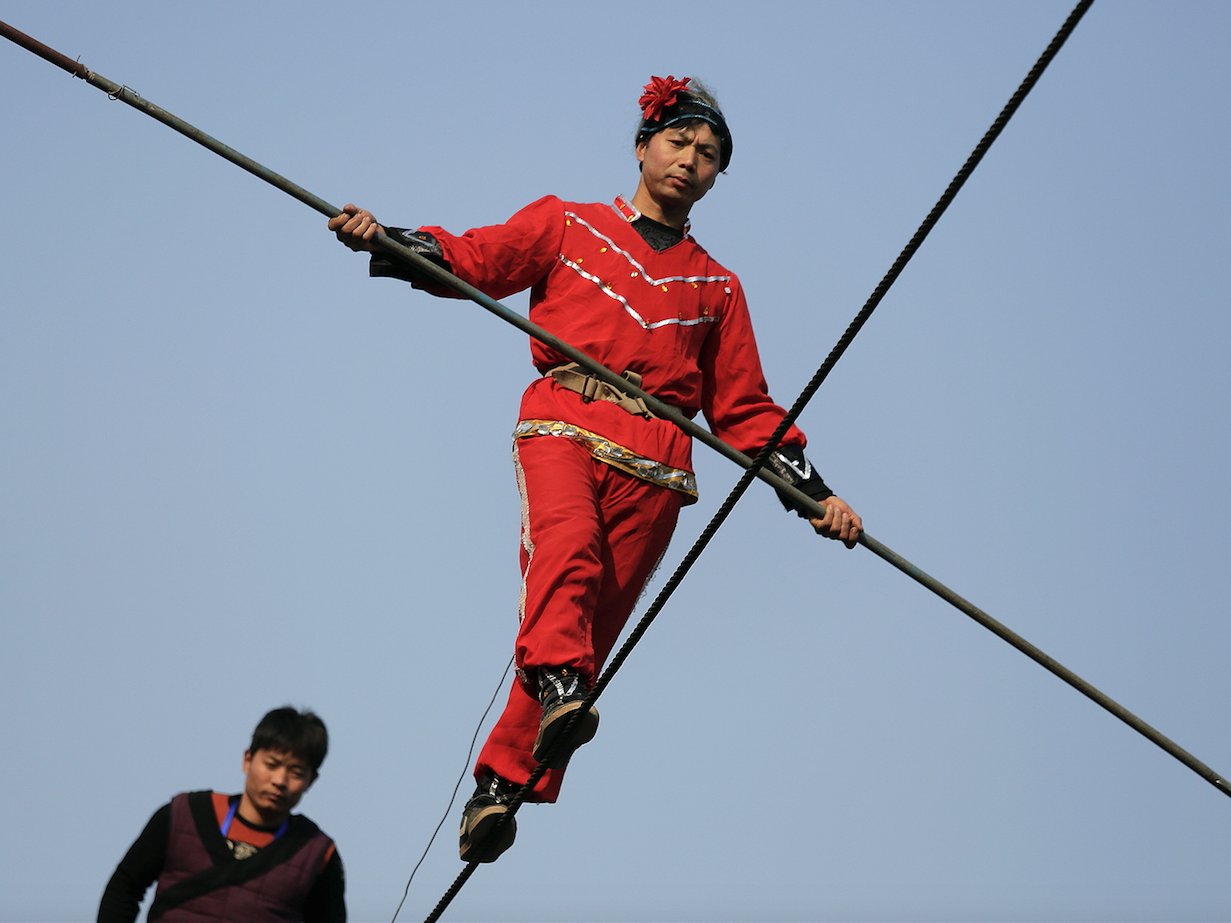 Reuters/Damir SagoljAcrobats perform on a tightrope as the Chinese Lunar New Year, which welcomes the Year of the Monkey, is celebrated at Daguanyuan park, in Beijing, China February 10, 2016.

KYLE BASS: China is already out of money

Hedge fund manager J. Kyle Bass, the founder of Dallas-based Hayman Capital, has a warning about a “ticking time bomb” in the Chinese banking system.

Over the last ten years, China’s banking system has grown from less than $3 trillion to $34 trillion, equivalent to around 340% of Chinese GDP.

To put it in perspective, the US banking system had about $16.5 trillion of assets heading into the financial crisis, equivalent to 100% of US GDP.

“Credit has never grown faster or larger than it has in China over the past decade,” Bass wrote in a letter to investors dated February 10.

There is no precedent

“China’s banking system has grown from under $3 trillion to over $34.5 trillion in assets over the last 10 years alone. No credit system in history has ever attempted this rate of growth. There is no precedent,” he added.

Bass writes that Chinese banks have used wealth management products to accelerate this growth, and get around restrictions on lending.

According to Bass, Chinese banks are allowed to lend out 75% of their deposits. One way to bump that up is by offering wealth products like bank savings plans. They don’t count towards the 75% cap, but they do generate income, and they often offer investors guaranteed interest and principal payments.

Standard & Poor’s highlighted these products in a note last week, saying that “a growing reliance on WMPs to manage regulatory capital ratios could undermine the bank’s true capitalization.”

That is because these off-balance sheet vehicles tend to be brought back on to the balance sheet when they’re struggling to deliver the returns they’ve promised.

While the most publicized workaround has been the use of Wealth Management Products (WMPs) – devised to circumvent deposit rate caps and loan-to-deposit ratio restrictions – the most insidious is the use of Trust Beneficiary Rights (TBRs).

It’s the TBRs that are the “ticking time bomb,” according to Bass. The TBRs are being used to hide loan losses and it’s being done away from the eyes of regulators.

Here’s how Bass explains it:

When loans approach a nonpayment status, Chinese banks typically push them offbalance sheet. Without going into the nuances of exactly how this is done, the basic premise is that the non-performing loan is transferred to a ‘Trust Company’ while the bank continues to be the ‘guarantor’ (i.e. the bank retains all of the credit risk). In exchange, the bank records the ‘asset’ as a Trust Beneficiary Receipt or TBR.

What does this mean for Chinese banks? There is a bad answer and a worse answer. The bad answer is that Chinese bank capital – the equity buffer – is significantly overstated. A TBR requires much less capital to be set aside (only 2.5c as opposed to 11c for an on-balance sheet loan) at the time of origination (anyone thinking Fannie and Freddie?). Adjusting reported bank capital ratios for this effect changes reasonable 8-9% Core Tier 1 capital ratios (CT1) to undercapitalized 5-6% levels.

Now, the worse news. TBRs are one of the biggest ticking time bombs in the Chinese banking system because they have been used to hide loan losses.

Bass includes a table to illustrate how common these TBRs are, and highlights the ratio of TBRs to loans column. That shows that in some cases banks have more in TBRs than they do in loans.

“One can make many assumptions regarding the collectability of such loans, but our takeaway is that the system is already full of massive losses,” he said.

WMPs, TBRs, and the 8,000+ credit guaranty companies constitute the majority of China’s shadow banking system. This system has grown 600% in the last 3 years alone. This is where the first credit problems are emerging, away from the eyes of regulators.

Bass, who correctly predicted and profited from the mortgage crisis in 2008, thinks that China in the end will have to devalue its currency to handle this. Bass is among a handful of hedge fund managers betting against China’s currency, the yuan. Much of Hayman Capital’s fund right now is devoted to the yuan short.

The Chinese government has the capacity and the willingness to do what it needs to do to prevent a banking system collapse. China will save its banks, and the renminbi will be the valve for normalization. It is what any and every government would do if put into a similar situation. China should stop listening to Kuroda, Lagarde, Stiglitz, and Lew and start thinking about how to save itself from the impending disaster in its banking system.