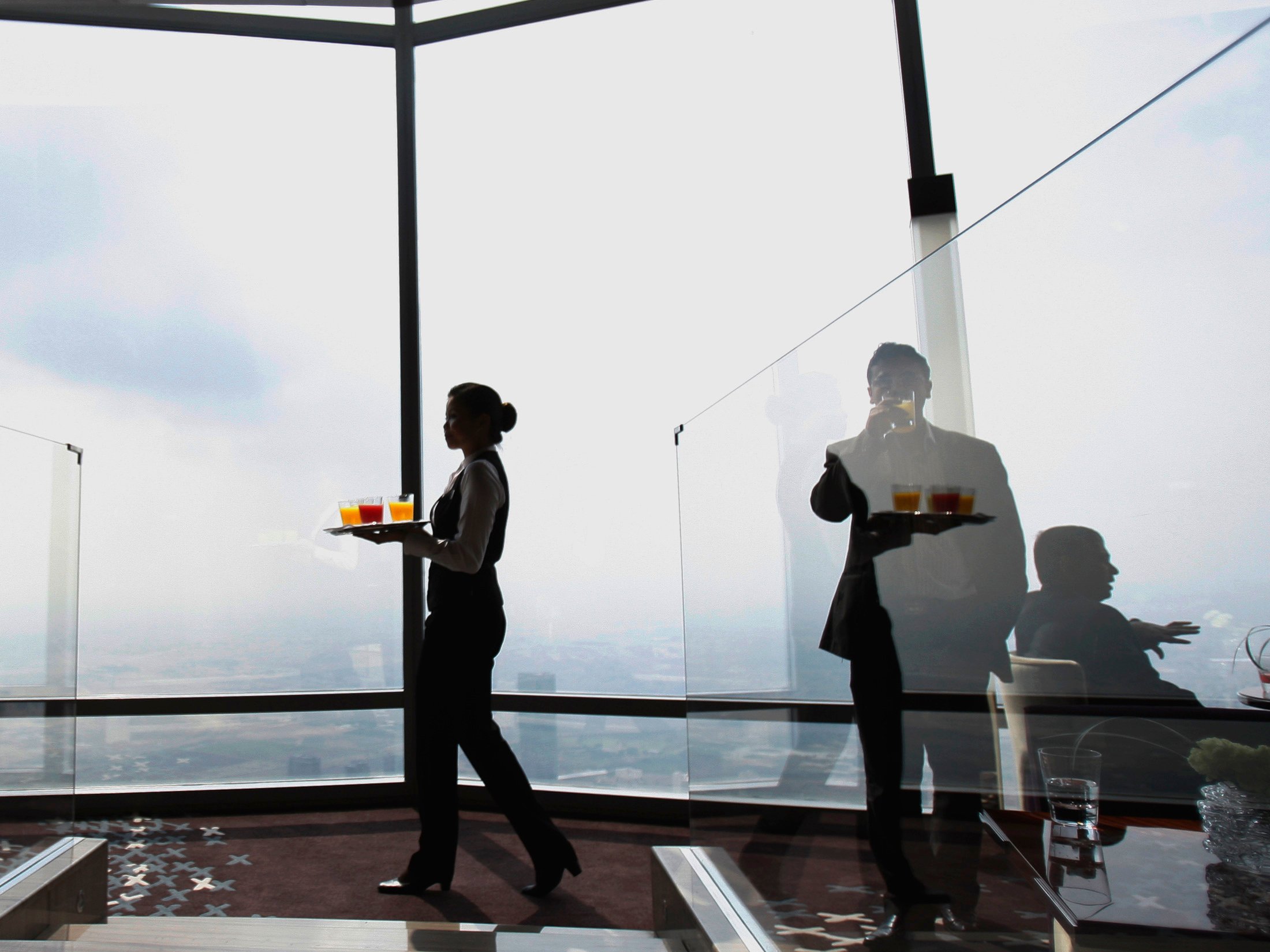 ReutersA waitress carries drinks during the opening of “At.Mosphere” the world’s highest restaurant in the Burj Khalifa in Dubai January 23, 2011.

There are people in the world who rarely stay in one place.

They’re the executives, the entrepreneurs, and the global citizens who feel just as comfortable in Dubai as they do in Shanghai.

Call them your global jet setters, if you like.

And in 2016 they’ve started to notice that some members of their group have gone missing — the Brazilians and the Russians. They’re just gone.

“It kills us the summer in Miami. We own four businesses there, and they [Brazilians] prop up the business in the summer,” John Meadow, CEO of LDV Hospitality Group told Business Insider.

His firm owns around 30 upscale restaurants and clubs from New York City to Las Vegas and beyond.

“In August, Brazil was gone.”

It’s unlikely the Brazilians will be back this August either.

Since the end of 2014, Brazil’s economy has been hit with a multi-billion dollar corruption scandal at its massive state oil firm, Petrobras. Then there is the slowdown over at its major trading partner, China, and double digit inflation. Add in a growing fiscal deficit, a Presidential impeachment crisis, a collapse in the price of its key commodities exports, and a currency that has fallen 40% against the dollar.

Throw the Zika virus on top of that, envision a summer Olympic Games with all that chaos going on, and the picture gets even uglier. For Brazilians a Miami vacation, right now, is not really an option.

Investing.comThe real has plumetted against the dollar over the last two years

Noticing these disappearances is enough to make the nightlife crowd a little nervous. In the coming weeks, Meadow will head to Dubai for the sixth time in the last year.

“I really want to go there, and I really want to do my deal there, but I’m trying to be careful for the first time in my life … because I’ve seen in this year, the Russians disappear,” he said.

Russia’s story isn’t that different from Brazil’s. The country is suffering, in part, due to the collapse in global commodities prices. Western sanctions put in place because of Russia’s involvement in Ukraine have also strained the economy.

In 2015 the inflation rate hit 12.9%. The Russian ruble has fallen 55% against the dollar over the last two years. There’s an underground market for cheese.

Investing.comThe ruble has collapsed against the dollar since 2014.

Across the jet set capitals of the world, inside the clubs and high-end restaurants, everyone from servers to chefs have noticed the shift.

Last summer, a global economic slowdown was a big part of industry chatter at the Aspen Food and Wine Festival. Consensus was: ‘It’s getting hard out there, people.’

It’s the kind of environment that has at least one New York hospitality CEO teaching their staff to monitor oil rig counts to see if there’s any sign oil prices will bounce back soon.

It took the industry a while to feel the storms brewing abroad, but they’ll take any sign of a bottom.