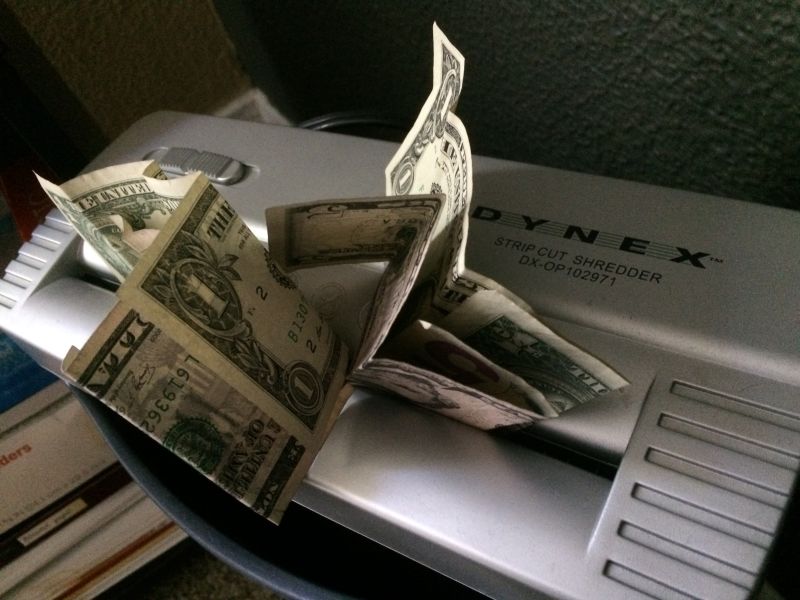 I now know what it feels like to literally throw money down the drain. Let me rephrase. I know what it’s like to take hundreds of dollars, rip them them shreds and then toss them down a garbage disposal. That is exactly what I experienced with my most recent car purchase and I don’t want to repeat this again.

When you’re looking to buy a car at a dealer, the financing is straightforward since the dealer can set up something for you easily. However, if you spot a car on Craigslist or Autotrader that you want to buy from a private seller, then you have to take it upon yourself to find the money. Assuming you don’t have a bunch of cash sitting in your bank account, you have a few options available to you to make that car purchase a reality:

b) Beg your parents for money

d) Get a loan from a bank or a credit union

I briefly considered option “c” but then I thought that I need to save “c” for when I want to buy a yacht. For now, I decided to go to my local credit union, since they were offering me a good rate.

I remember when University Federal Credit Union (UFCU) used to offer auto loans which you could easily obtain to purchase used vehicles from individual owners but for some reason they stopped doing that. It was such a simple process. They just provided you the loan at a good rate (assuming you didn’t have $30K in credit card debt that you didn’t bother paying off) and you’d take that to buy the car of your dreams from Carl next door.

However, these days, the only way to do this at the credit union is to get a personal rate at an astronomical rate, and then once the title is transferred to your name with UFCU as the lien holder, the loan would be converted to an auto loan at which point the rate would go back down to a more tolerable level. This is what I did last year with the 335i and it worked out perfectly. I bought the BMW using a private loan with the ridiculously high rate of 11.9%, got the title transferred, attached UFCU as the lien holder and then the following day, the loan was converted to an auto loan at the low rate of 1.9%.

I figured that with my most recent purchase, a 2008 Lexus IS-F, the process would be as smooth and painless as it was with the BMW. The seller had financed through the same credit union and so I thought, “Great, it will be so easy to do this transaction!” Wrong! Instead, it resulted in the same thing as taking money out of your bank account and throwing it in the trash along with your empty milk carton.

Lesson 1: Never assume that a car buying transaction will be “easy.” It will be probably be terrible. Go in with the worst expectations and then maybe, just maybe, the transaction won’t be quite as painful. It’s like when you go to Chipotle to eat. Just assume you’ll throw up afterwards and so when you actually do, it won’t be as much of a shock.

Somehow, going through UFCU for both of us did not make one bit of difference. It was still an involved process; UFCU would have to first inform the DMV to release the lien on the title and then send over the cleared title to me.

After UFCU made both myself and the seller fill out a bunch of paperwork, I expected the title to show up in the mailbox. However, after a week and a half of waiting, the only thing I got in the mail were Dove soap coupons and holiday cards from people with pictures of them vacationing in New Zealand, Turkey, Iceland – yes, you have a better life than me – I get it.

I checked with UFCU and after looking into itthey told me that they sent it to the wrong address.

And, so now, the title was lost somewhere out there in the snail mail world. Here is a question. Isn’t it about time we got rid of paper mail completely? Why does it need to exist?

Losing the title meant that I was stuck in DMV hell. Even if the title was somehow returned to the DMV, the likelihood of which was lower than someone winning the powerball lottery, the only option at that point was to get the seller to show up and request a certified copy of the title, which would then be transferred to me.

Now here is where it gets worse. I thought that I could get a hold of the previous owner easily, but I couldn’t. Because all of this mess unfolding during Christmas and New Years, when everyone was mostly intoxicated, the seller didn’t return my call or text messages. How dare he take some time off during Christmas and New Years?! Doesn’t he know that I might have issues with paperwork and should therefore be available 24/7??

Lesson #2 – Don’t buy a car from someone during the holidays. You probably won’t be able to get a hold of the seller because the last person they will think of is you. The seller just sold you a car they probably didn’t want, paid off a car loan and now has some extra money that is being used to go to France to ring in the New Year. You are as important to the seller as dryer lint.

I started getting worried. What if I never hear from the previous owner again? What if I can’t get a hold of the title? Would I be stuck with a $28,000 loan with 11.9% interest? I am so screwed.

Paranoia set in. I now had this 2008 IS-F that I was regretting purchasing.

So I waited, impatiently, with increasing levels of stress, and started checking my phone every few seconds, hoping that if I stared at it long enough, I would get a call. It was like waiting around to get a text or a call from someone you went on a date with recently. Is a simple text too much to ask for? But, things went so well!

Meanwhile, the 11.9% loan continued to accrue massive amounts of interest.

Finally after a week, I got a call from the seller. Yes! What a relief…oh…wait. Not so fast. Now, I actually had to schedule a time to meet the seller at the DMV. We went back and forth for several days to try to find a time that worked for both of us.

I could’ve spent that money on dinner at a Michelin-starred restaurant in Chicago and then gone to Wendy’s to fill up afterwards.

So here I am, out $300, for the dumbest reason ever. I’m sure UFCU loves me because they got exactly what they wanted – I’ll never fall for that trick again.

Lesson #3: Do not go this route when financing for a car. Find some other way. Just ask your parents for a loan. It’s so much easier and if you’re nice to them, you may not even have to pay them back!