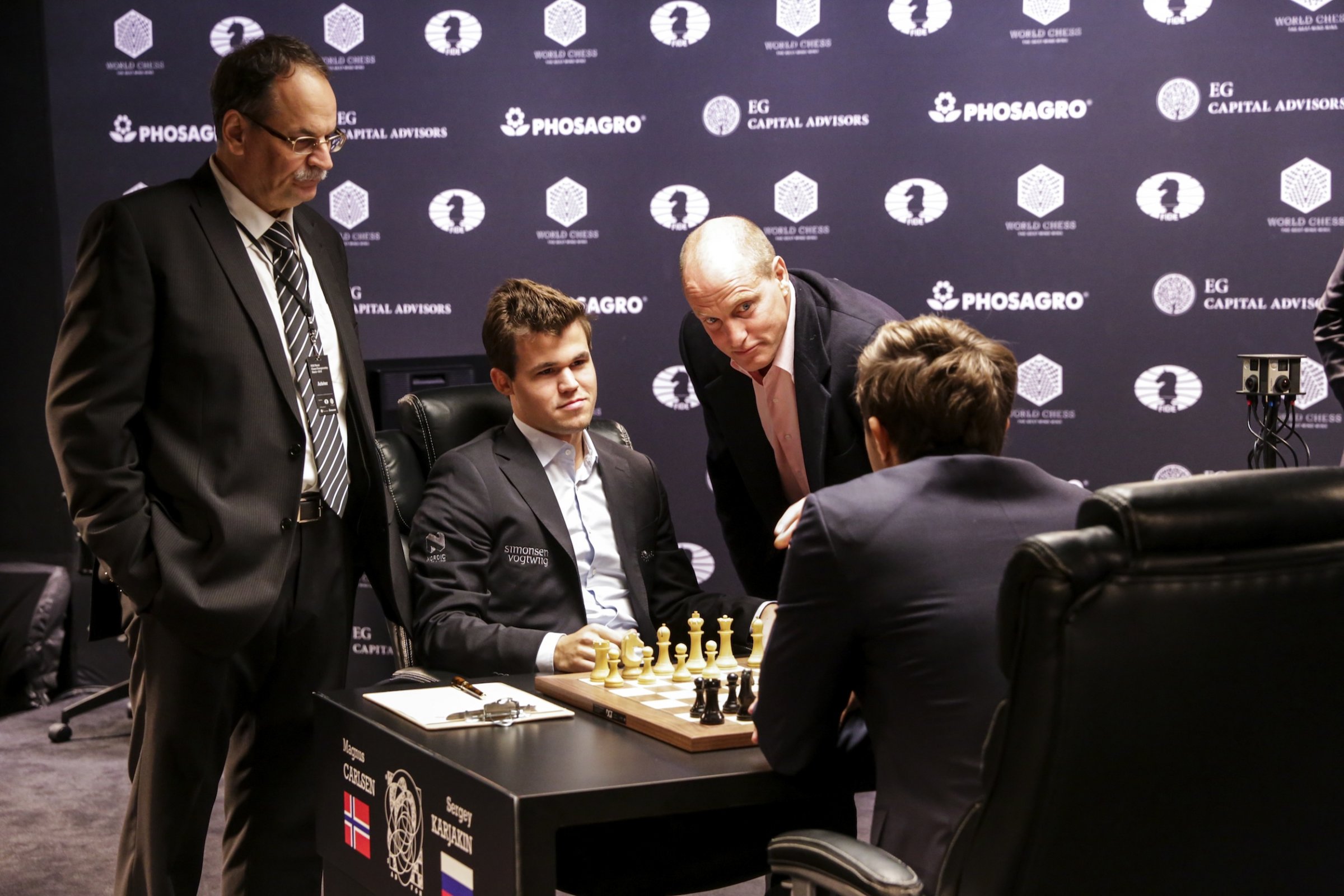 The ceremonial first move was made by Woody Harrelson.Polina Gurtovaya

Carlsen is a clear favorite, and with the white pieces, he tried something a little different — and might have made an inside joke about the recent US presidential election.

Playing in a soundproof chamber in lower Manhattan, with the world’s chess elite looking on around the globe, Carlsen opened with d4 (the ceremonial first move was made by actor Woody Harrelson), a so-called Queen’s Pawn game. Karjakin countered as black with by advancing his king side knight to f6, setting up what looked to be an Indian Defence.

But then Carslen did something stunning: he played his dark-squared bishop to g5 — an opening known as the Trompowsky Attack, named for Olivier Trompowsky, a Brazilian player who devised the opening in the mid-20th century. I’ve never seen the “Tromp” played at this high a level, not in the last two World Championships or dozens of tournaments involving the game’s finest players. At the event and around the internet, fans speculated that Carlsen might have been making a sort of inside-chess joke about Donald Trump’s election win — Carlsen essayed the “Trump”-owsky! Get it? Hilarious!

The idea in the Tromp is to create on the black kingside a position similar to what you’d see on black’s queenside if as white you played e4 as your first move and then challenged black’s knight on c6 with your light-square bishop, then exchanged the minor pieces — bishop for knight — and inflicted “doubled pawns” on black’s c-file. That’s a long-term weakness in this exchange variation of a very old opening called the Ruy Lopez; the doubled pawns hurt black in an endgame when most or all of the pieces have been traded off.

Carlsen got the bad pawn structure he wanted for Karjakin, but then he did something even more offbeat: when Karjakin played his queenside knight to c6, Carlsen put his light-squared bishop on b5, pinning the knight to the king and establishing a rather tangled overall queenside position.

Karjakin, who like many Russian players is noted for his mastery of opening theory, was a befuddled and thought for something like 20 minutes about his response. My theory was that he hadn’t seen this continuation of an exchange Trompowsky for so long that he had to dig deep to remember the lines — and debate with himself on the grandest chess stage in the world whether Carlsen had prepared the opening. This is known as “walking into preparation,” and for a top player, it can be a demoralizing experience, the realization that your opponent knows his next ten or 15 moves and variations, while you’re flying blind.

Karjakin recovered, however, and although the position looked sort of weird, eventually a melee on the c-file developed and the players exchanged off almost all the pieces, and the game appeared headed for a draw. Of course, the discussion immediately turned to whether Karjakin could handle the Carlsen endgame torture chamber, involving a stretched-out, more-or-less equal position that a lot of pros would call a draw, but that Carlsen often hangs onto to test both his opponent and himself.

It was a grueling beginning for Karjakin, but the Russian is no endgame slouch, and after the remaining rooks were exchanged and Carlsen started hopping his knight around, the players repeated moves and called it a draw on move 42.

The bottom line was that it was a cool commencement of the World Chess Championship, but that with both players in good form, the outcome reverted to Carlsen and Karjakin’s historic record, which consists of many draws (Carlsen has the edge in wins, however). The 2016 WCC is now even, with each player having half a point as they battle for a purse of around $1 million.

Game 2 kicks off on Saturday at 2 PM ET.

Here’s the final position on the board for Game 1: