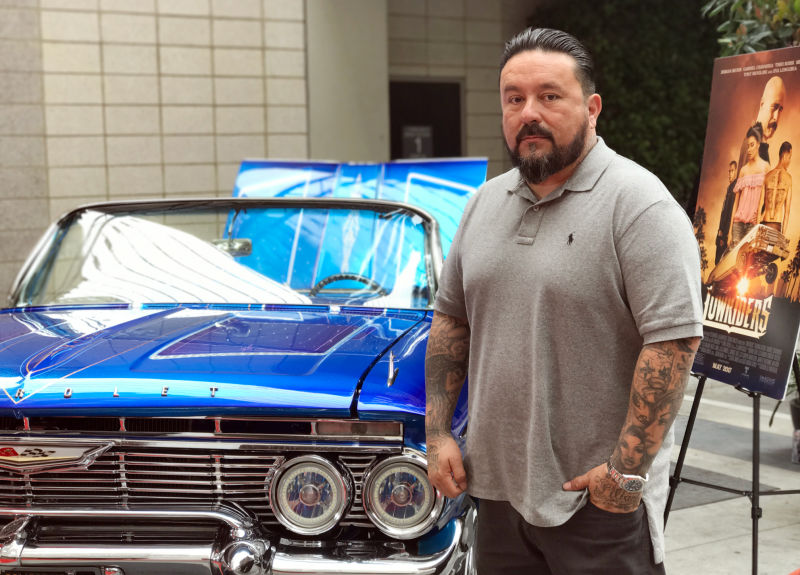 The cars in the new film Lowriders, set to be released Friday, may be more impressive than the actual movie.

The film, set in Los Angeles, follows a young Mexican-American street artist (Gabriel Chavarria) as he struggles between choosing to pursue his dream of being an artist or following the path his father has cleared for him at the family-owned car body shop.

Lowriders is the first release from Telemundo Films. The Spanish-language broadcast network is venturing into developing, producing, and marketing feature films in English and Spanish for the Latinx market, which represents about 18% of the population, but make up 23% of frequent moviegoers, according to a 2016 study from the Motion Picture Association of America. For comparison, white people account for 62% of the population and make up about 51% of frequent moviegoers.

Latino moviegoers have long held a connection with car movies. They have supported the Fast & Furious franchise since it was established in 2001. In 2015, Latinx moviegoers made up 37% of Furious 7‘s ticket buyers, followed by white moviegoers at 25% and African-Americans at 24%.

Despite the Latinx power at the box office, the group is still grossly underrepresented in films. A study by the University of Southern California’s Annenberg School for Communications and Journalism found that in 2015, only 5.3% of characters in 800 movies reviewed were Latinx. White actors landed 73.7% of the roles; black actors followed with 12.2%.

Lowriders offers a meaningful glimpse into the lives of young U.S.-born Latinos and lowrider culture, but admittedly feels overwritten. The film’s most engaging and authentic cultural moments all happen in and around the lowrider cars—the custom, reimagined classics popular amongst Mexican-Americans and Chicanos. The quintessential mechanical modification is often a hydraulic suspension system that allows the car to be driven really low or much higher off the road or even bounce.

A lowrider is a customized car, but it can also be a person who is part of the community. Some historians say the term lowrider stems from the practice of riding “slow and low” on the boulevard.

“I have a love and appreciation for four wheels and metal that goes fast and goes slow,” Mister Cartoon told Fusion in an interview this week. Mister Cartoon, real name Mark Machado, is one of the executive producers of the film and helped cast the cars in the movie.

Just like the actors were cast in the movie, each car in the film was handpicked. The film includes dozens of sought-after cars that Mister Cartoon knew of personally, reaching out directly to his contacts to get the Chevrolet, Cadillacs, and Lincolns seen in the film.

Some of the cars in the film are priceless because they’re just not for sale. Other lowrider cars in the movie can go for $20,000 while some can be auctioned off for hundreds of thousands of dollars, according to Mister Cartoon. He says Chevy Impalas from 1958 through 1969 keep collectors on the hunt.

Indeed, there’s only one car he wishes could have been included in the movie: The champagne-colored ’63 Impala convertible seen in the 1991 film Boyz ‘N The Hood. The car was sold and is now in Japan, which also has a thriving lowrider community.

There was a time when Angelenos could walk into a dealer, buy a car, and drive it straight to the the hydraulics shop to get it “wired” (the wires allow the driver to lift or drop the car). But these days, new car bodies just don’t allow for that to happen. “The last cars you could use are probably the Cadillacs from the late 1980s,” Mister Cartoon said.

“These cars can make a working class Latino a rock star in his neighborhood,” Mister Cartoon said. “In our neighborhoods the boulevards are the nightclubs and we’re out here showboating, showing off.”

But the cars are deeply personal, too. “You can look at a car and know a lot about that person. What kind of music they listen to, what their pad looks like,” he said.

You also don’t need a lot of resources to get started in the community because the cars are often in a constant restoration or customization process.

“I’ve been broke and had a bad-ass custom paint lowrider with no gas money, driving on a suspended license,” Cartoon said.

These days, the lowriding community has grown past the Latinx community. Mister Cartoon said African-Americans, Samoans, Filipinos, Armenians, and “crazy white boys” have joined car clubs. He said there’s a small and growing group of women in the clubs, too.

“Any car nut is going to find something in common with people in the lowriding community,” he said.

Our Obsession With Celebrity Is Being Fueled by Latinx Immigrants