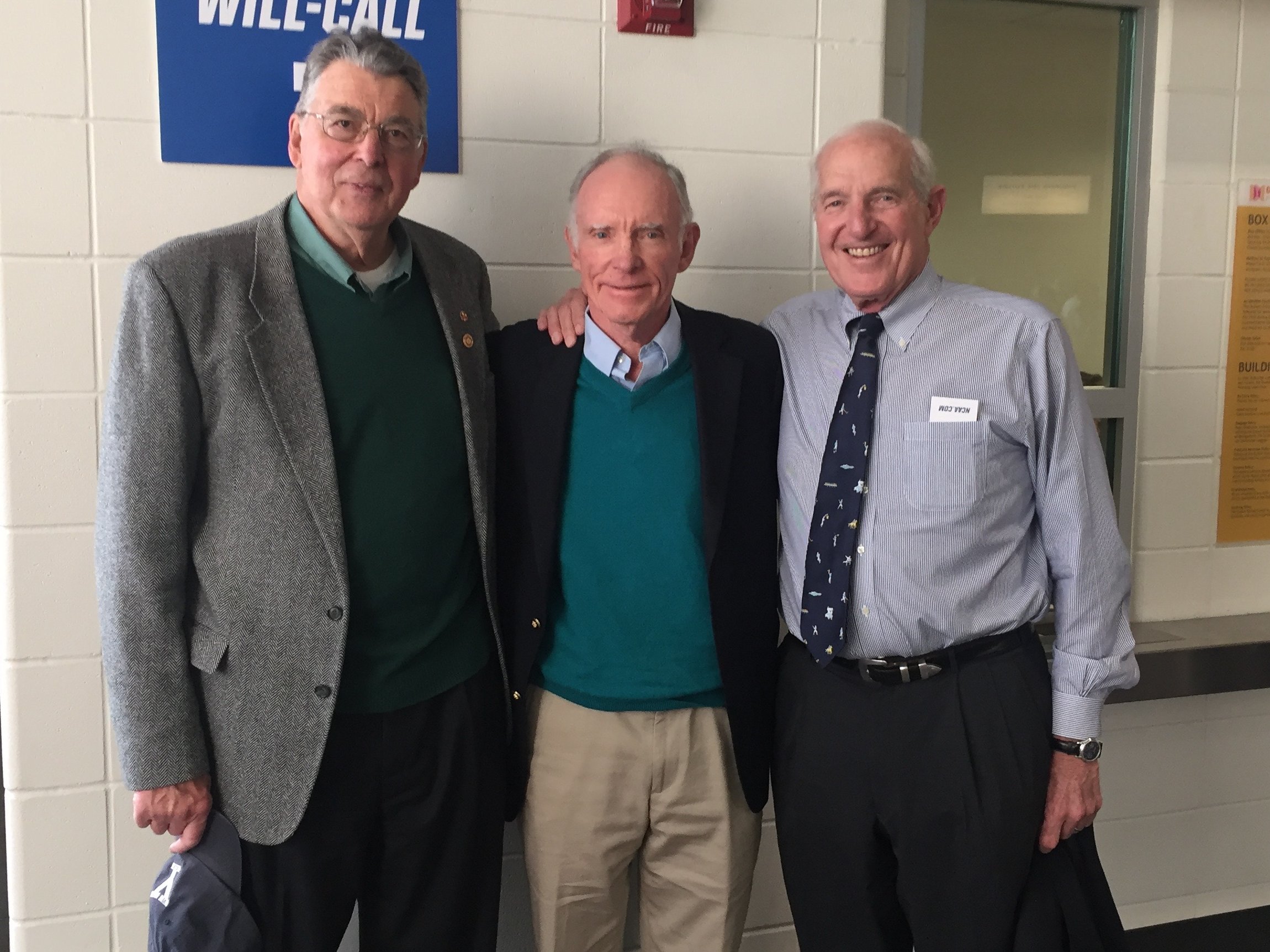 The top 10 business schools in America, according to US News & World Report

The 10 best public universities in America

The men were members of the last team to make it to the NCAA tournament, something that hadn’t been achieved in more than five decades, until this current season.

“We’re fired up,” Rick Kaminsky, the leading scorer for the 1962 Bulldogs said. “We went and talked to the team before breakfast so we got all juiced up.”

His records from the 1960s on “all-time leading” lists for the Ivy League still hold today, where they stand among other greats, like American Hall of Famer and New York Knick Bill Bradley.

Kaminsky himself was drafted by the Philadelphia 76ers in 1964, but opted instead for medical school and a career in urology.

“I brought the whole team for you here,” he said, nodding to his two friends, college roommates, and former teammates Dennis Lynch and Dave Schumacher.

“He’s all pumped up, don’t get too excited,” Schumaker said, in a good-natured ribbing of his friend. But they all were pumped up, reveling in the excitement of seeing Yale finally back in the championship. The last time the Yale Bulldogs were in the tournament — then the setting was Philadelphia’s Palestra — it was the early 1960s and the nation was led by President John F. Kennedy. It was the height of the Cold War, the Cuban Missile Crisis was impending, and women were still not granted admission into Yale.

Today, the world looks vastly different, but the awe of being back in the tournament is much the same.

“It’s unbelievable,” Kaminsky said of being back at the tournament to watch the Bulldogs compete, before taking me back to that moment when he and his team were in their same position:

I was telling the players today, this is what it’s all about. You train all of your life to play in the championship game. It was just so exciting we knew Wake Forest was just licking their chops. They didn’t think we were worth a damn. We lost in overtime it was just really exciting.

Kaminsky had 23 of the team’s 82 points. The game went into overtime against a Wake Forest team that had been heavily favored to win, which was in and of itself a small victory. Kaminsky fouled out in overtime and Wake Forest eventually went on to win 92-82.

But although most of the conversation centered on basketball, it was clear from talking to the former players that their most long-lasting achievement stemming from Yale basketball was that it was pivotal in building enduring relationships. The former Elis told me they were still in close communication with their fourth roommate, Hank Bryant, who was also a member of the team, but was unable to make it to Providence.

They also said they spoke with their coach, Joe Vancisin, before the game and said “he’s all gung hoe” about Yale’s matchup with Baylor. Vancisin, 93, is a college basketball Hall of Famer.

The men told me about how basketball has shaped their lives. “To represent the university in a varsity sport is a real privilege,” Dennis Lynch, the team’s starting guard, explained.

“You learn a lot about life; not just in academics, but you learn how to deal with adversity and stay calm,” Lynch, a retired money manager, added.

Dave Schumacher, the team’s center, spoke about the impact Yale basketball had on him.

“Basketball was an adjunct to our education and it broadened us and prepared us for life after school,” Schumacher, a retired executive of an electrical manufacturing firm, said. “It was what sports should be, not the be all and end all, but an adjunct,” he continued. Kaminsky echoed that sentiment, pointing to current Yale Bulldog Brandon Sherrod, who took last season off to travel with his a capella group the Wiffenpoofs. Sherrod came back to the team this season to secure an NCAA record with the most consecutive made shots in a row.

We ended our conversation with all three men adamant the Yale Bulldogs would win their matchup against Baylor.

And after 54 years of waiting, the Yale men’s basketball team’s return to the NCAA Tournament was triumphant, upsetting fifth-seeded Baylor, 79-75, on Thursday to advance to the second round.

After the game, Kaminsky was just as exuberant.

“I’m so proud of them,” he said. “I told them at breakfast they were better than Baylor and all they had to do was play their game, have fun, and kick some a**. I guess Yale is a basketball power now.”

SEE ALSO:‘No matter what, this will be a historic season’: Yale celebrates triumph in NCAA Tournament after weeks of tension