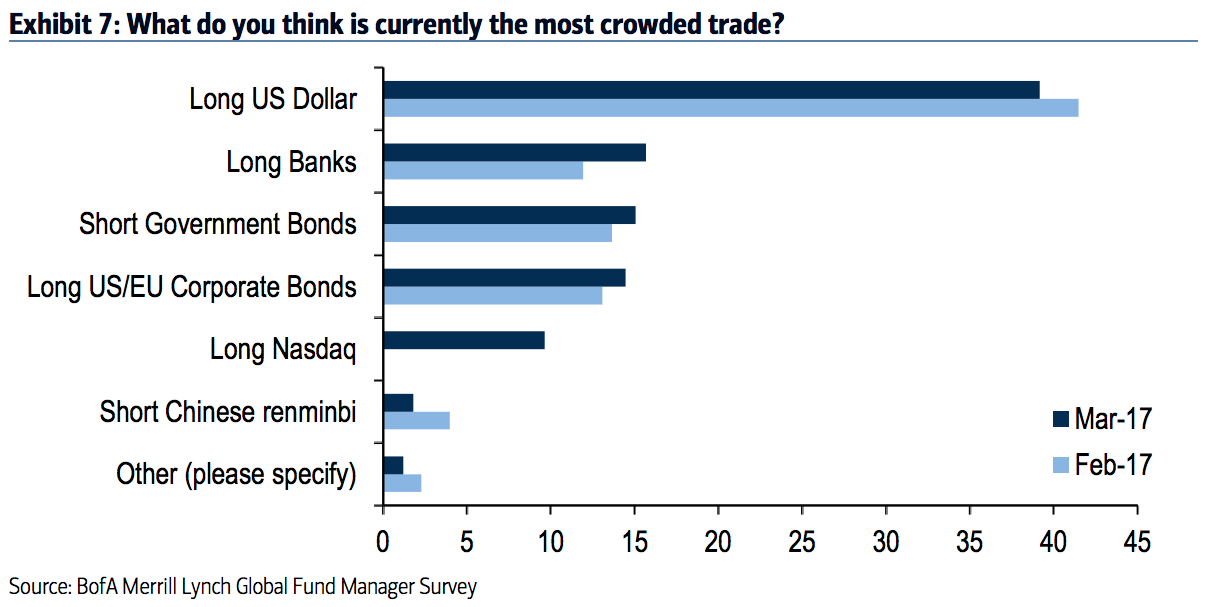 Investors continue to hold seemingly conflicting views on the US dollar.

Bank of America Merrill Lynch’s latest survey of fund managers published on Tuesday showed that bets the US dollar would rise are considered the “most crowded” trade.

One problem with a crowded trade is that investors could be exposed to heightened volatility if the bet they’re making suddenly turns in the other direction. At the same time, “long dollar” was one of the most popular positions relative to the survey’s historical averages: And, the survey also showed that money managers think the dollar is more overvalued than it’s been in a decade: The dollar rose to a 13-year high against other major currencies after the November election, supported by traders’ hopes that President Donald Trump’s agenda would stoke the US economy.

But the greenback’s rally has faded this year, with the dollar index down nearly 4% since January 1. The dollar “has struggled for much of this year, despite strong data and a Fed hike,” said Myria Kyriacou, an FX strategist at BAML, in a note on Tuesday.

Relative to the past year, “the data show positioning almost fully unwound, and we would judge positions to beclose toneutral,” Kyriacou said.

“With the March hike now duly delivered, and market pricing broadly in line with the dots, the trigger for a meaningfully higher USD will have to come from the fiscal side.Positioning will not be an impediment in either direction.Our Sentiment Survey suggests thatexpectations remain high that tax reform will be passed this year, even as the hopes of progress before the summer recess appear to have collapsed.”