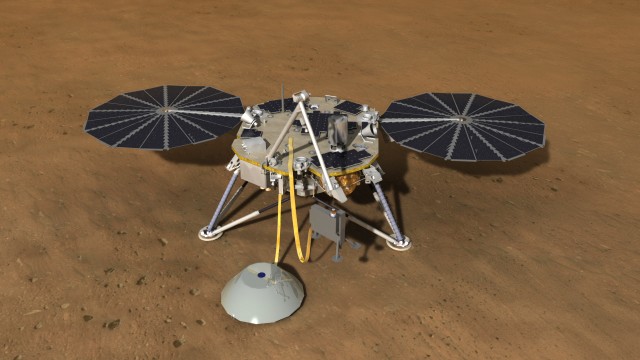 NASA on Wednesday announced it will now launch its InSight mission in 2018, two years later than initially anticipated. The spacecraft, Interior Exploration using Seismic Investigations, Geodesy and Heat Transport, or InSight for short, will be used to study the deep interior of Mars and provide scientists with information about how rocky planets, such as Earth, form and evolve.

According to NASA, InSight was expected to launch this month but a vacuum leak forced the agency to put those plans on hold. Scientists say they will redesign the affected instrument in anticipation of a 2018 launch, which is targeted between May and November.

“The quest to understand the interior of Mars has been a longstanding goal of planetary scientists for decades,” said John Grunsfeld, associate administrator for NASA’s Science Mission Directorate in Washington. “We’re excited to be back on the path for a launch, now in 2018.”

The original instrument, known as SEIS, was constructed by the French space agency Centre National D’Etudes Spatiales (CNES), and will now be redesigned and built at NASA’s Jet Propulsion Laboratory. Once it’s built, CNES will perform instrument level integration and test activities, according to NASA. SEIS will help InSight measure quakes on Mars along with other ground movements.

In addition to InSight’s mission in 2018, NASA has plans to launch a new rover to Mars in 2020, and maybe even send humans to the Red Planet in the 2030s.