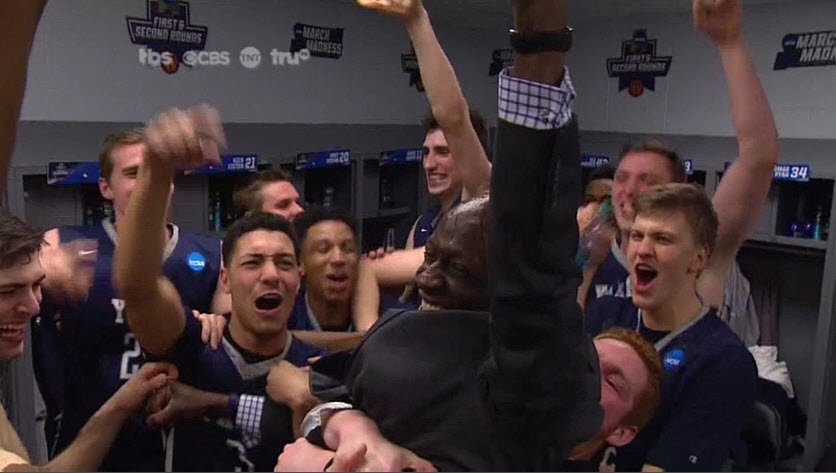 After 54 years of waiting, the Yale men’s basketball team made a triumphant return to the NCAA tournament, upsetting fifth-seeded Baylor to advance to the second round.

It is the first NCAA tourney win in Yale’s history.

“It’s incredible,” Caleb Holmes, a Yale alum and swingman who played for the Bulldogs from 2004 to 2008, told Business Insider.

Holmes’ twin brother, Nick, who also played as a swingman for the Bulldogs, echoed that sentiment, specifically describing the elation he felt for head coach James Jones, who has spent the past 17 years building the team into the force it is today.

He continued on to say that he hopes the focus on the team can move back to basketball, noting that the players have had to struggle through adversity in the past several weeks.

His words hint at the somewhat bittersweet nature of the season, as the team has been fighting public perception issues off the court.

Last week, sources confirmed to Business Insider that Jack Montague, the senior captain of the Yale basketball team, was expelled in connection with a sexual-misconduct investigation.

On Monday, Montague’s lawyer released a statement announcing that he intends to file a lawsuit against the university.

But that wasn’t before Montague’s teammates rallied behind him and wore T-shirts in support of him during a televised game at the end of February.

The actions of the basketball team inflamed tension on Yale’s New Haven, Connecticut, campus, and posters appeared telling the team to “stop supporting a rapist,” according to the Yale Daily News.

The team then released a statement addressing the controversy:

Our recent actions to show our support for one of our former teammates were not intended to suggest otherwise, but we understand that to many students they did. We apologize for the hurt we have caused and we look forward to learning and growing from these recent incidents.

At Thursday’s game in Providence, Rhode Island, it was hard to escape conversations about the negative issues the team has faced recently.

“It’s really tough as a fan where you really don’t know much knowledge of the situation,” Ric Best, a 2014 Yale graduate, told Business Insider. “It stinks that there is a controversy, but I just want to celebrate the players that are on the court.”

But not everyone thought that the team’s controversies would leave an indelible mark on its legacy.

“No, we will remember this as one of the best teams in Yale’s history,” Yale sophomore Allen Wang told Business Insider. “No matter what, this will be a historic season.”

Yale faces off against Duke University on Saturday.