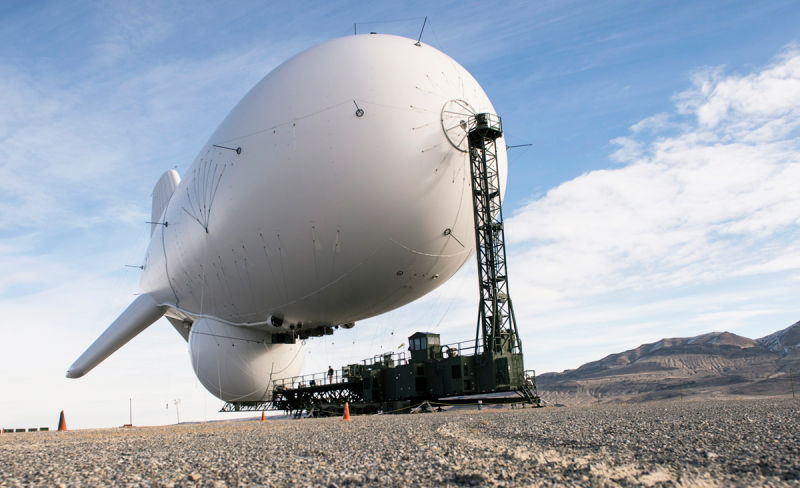 The Joint Land Attack Cruise Missile Defense Elevated Netted Sensor System (JLENS) radar blimp was controversial long before it broke loose and ran amok across America’s northeast countryside. Yet even following that high-profile event the military still wants it, and justified its existence by claiming a real threat to Washington from Russian cruise missiles.

It may look like a pregnant blimp, but it packs one hell of a radar system. The Joint Land Attack… Read more Read more

Despite what NORAD says about the necessity of JLENS, this strategy has many inconsistencies, and there are potentially better, more viable alternatives to the blimp that can be used instead.

There are three types of missiles we worry about, the third one’s the cruise missile attack… The Russians are employing these cruise missiles in Syria today, both from bombers, ships and submarines. There’s no operational or tactical requirement to do it. They’re messaging us that they have this capability and those missiles can have a nuclear-tipped or conventional warhead.

This statement largely reinforces what Foxtrot Alpha has been saying since Russia first launched its first cruise missile into Syria, although this capability is nothing new. The fact that such a high ranking officer in the U.S. military would flatly come out and say that a cruise missile attack by Russia is a threat is.

The scarier reality is that Russia could sell this capability to nearly anyone with the cash to afford it, and they do not have to be launched from a military ship.

Russia’s Club-K missile for instance actually has a shipping container launch and control system option, another threat we have been discussing for years, and one that could give even the poorest of nations, or even non-state actors the ability to attack the continental U.S. or America’s interests abroad.

Detecting and tracking incoming cruise missiles from far over the horizon does not have to be done by aerostats laden with radar gear. There are alternatives. JLENS has cost almost $3 billion to develop.

Originally the idea was to have 32 of the two-radar, two-aerostat systems scattered around America’s borders, giving nearly continuous radar coverage focused on cruise missile attacks and slow and low flying threats. This never happened. The program became mired in technical issues and cost overruns instead.

Today, the JLENS program largely centers on just one system based at Aberdeen Proving Grounds that is intended to watch over Washington D.C. and the region. With this in mind, it remains largely an experimental, one-off capability, and without the larger plan to deploy these evenly around America’s coastline, the rest of country remains somewhat vulnerable to such an attack.

Beyond breaking loose from its tether, JLENS is still not working as promised. It even failed to detect a low and slow flying autogyro that made its way up the Mall and right onto the Capitol’s front lawn last year. It remains unclear if the JLENS was even aloft at the time of the event, but what is known is that it had not been sending tracking information to the D.C. air defense system during that period of time due to chronic malfunctions. We still don’t know if it is today.

Other systems could do JLENS’s job. America’s Air National Guard units that fly the F-15C/D are located strategically around the US’s borders (Massachusetts, Florida, Louisiana, California, Oregon) and have been reequipped with APG-63V3 AESA radars.

These radars were procured for a variety of reasons, but one of the most pressing was their ability to more reliably spot and track incoming cruise missiles. All of these units have armed aircraft on quick reaction alert, so they do have the ability to defend their regions from such an attack. Still, the problem remains that with land-based radars alone there is much less early warning as opposed to having a surveillance radar aloft.

America’s airborne early warning and control aircraft (AEW&C), the Air Force’s E-3 Sentry and the Navy’s E-2 Hawkeye, were picking out airborne threats decades before JLENS was even an idea.

Today, the E-2D in particular is said to be very capable at detecting cruise missiles. Although keeping dozens of these high-value, low-density assets airborne nearly all the time would be prohibitively expensive, covering the region around D.C. alone may be downright cost effective when you compare it to the JLENS program.

The Navy’s East Coast E-2 Hawkeye squadrons are based out of Norfolk, Virginia. Funding and assigning the task of airborne surveillance for Washington D.C. to them could be an option. Currently, the White House has requested $45.5 million for JLENS in fiscal year 2017. This money could be transferred to a proven asset like the E-2 for the same mission. There is also a training aspect to these types of sorties that could be factored into the east coast E-2 community’s mission and training syllabus.

Alternatively, the Pentagon could cut its losses and procure an aircraft off the shelf that is even better suited for the task., such as Israel’s Conformal Airborne Early Warning (CAEW) version of the Gulfstream 550 is very well suited for exactly this mission, and has massive endurance and crew comforts necessary to get the most out of each sortie.

The Navy is already buying a couple of these proven systems to replace their NP-3D “Billboard” test range telemetry aircraft flown out of NAWS Point Mugu.

Even going to the commercial space to fill the role on a fixed-cost, or pay as you go basis, may be an attractive alternative to JLENS boondoggle. The solution could even be an unmanned one that can fly at extreme altitudes for long periods of time, giving a radar picture that is far superior to that of JLENS which operates at much lower altitudes or even manned assets that operate between up in the flight levels

By outsourcing this capability, it would greatly limit the exposure to the Pentagon when it comes to cost overruns, and if it is proven successful the capability could be duplicated deployed to other parts of the country.

The idea of using an aerostat for persistent radar surveillance is intriguing, but the fact of the matter is that JLENS has not provided the high-availability rates that were promised. And seeing the extreme investment into the system, more conventional choices seem like a much better solution.

If cruise missile defense was so dire of a need, we would have multiple JLENS systems up around D.C. to account for the gaps in the current systems coverage due to technical issues. Then again, if it doesn’t work at all, then duplicate systems would not help. With this in mind the whole persistent advantage that the program is meant to offer falls apart.

Additionally, more assets could be deployed during high-threat times, and they can even deploy around the US to provide early warning for America’s F-15 units tasked with air defense. This is an important potential capability because the rest of the US has no surface-to-air missile systems to rely on like the Washington D.C. area has.

Yet even Washington D.C.’s air defense capabilities seem mismatched considering the threat that we are being said exists. The region is protected by NASAMS surface-to-air missiles, but its range is limited to a couple dozen miles. JLENS was supposed to be fully integrated into the air defense system around the capital, providing targeting information for systems like NASAMS. We know that this is inconsistent at best, or has never happened at worst.

Yet the long-arm of D.C.’s air defense capability is provided by F-16C/Ds based out of Andrews AFB. Unlike the F-15C/Ds that guard America’s seaside borders, these F-16s are not equipped with AESA radar systems.

With this in mind, it is odd that the Pentagon has paid billions of dollars in an attempt to protect Washington D.C. via JLENS’s early detection of low-flying cruise missiles, but the aircraft that are supposed to fly out and shoot them down will have trouble finding and engaging them themselves.

This issue is just now finally being addressed in Congress, but it does go back to a larger debate over the fate of the USAF’s F-16 force. But still, just stationing F-15C/Ds equipped with APG-63V3 AESA radars at Andrews AFB instead of old F-16s would be a logical solution over keeping this hole in our defenses open. Even if the current F-16s finally get equipped with AESA radars they will still be inferior to those installed aboard the F-15C/Ds.

Lockheed’s F-16V testbed flew for the first time yesterday. This face-lift of the F-16 is almost… Read more Read more

In the end, if cruise missiles are a major threat than we need to treat them like that and fund systems that will actually protect our seat of power from such an attack. The JLENS experiment has had many years to prove itself, and there are real alternatives available, both in hardware and program structure, that seem more flexible and capable than what JLENS offers.

This also bring up the question, if we only have JLENS capability tethered to a mooring in rural Maryland, than why wouldn’t the enemy just attack us where JLENS is not, which is everywhere else.

As for the possibility of a Russian cruise missile attack on Washington D.C., if our generals really see this as a looming possibility, than this broken blimp is the least of our worries.