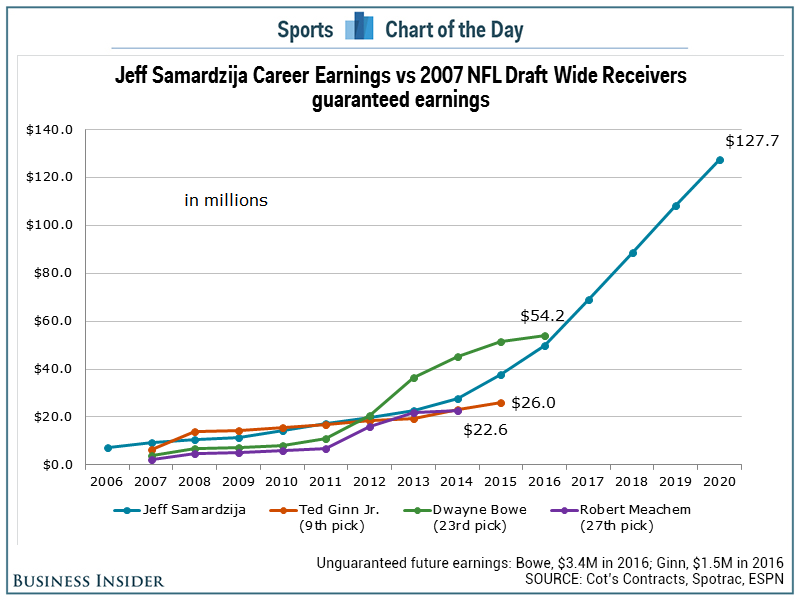 Former NFL wide receiver Antwaan Randle El raised some eyebrows this week when he said he’s losing his memory, can’t walk down stairs, and regrets choosing football over a potential baseball career. In 2006, former Notre Dame wide receiver Jeff Samardzija faced a similar dilemma, choosing baseball over football, and it has proven to be the right decision.

After being drafted in 2006, the Chicago Cubs gave Samardzija a $7.25 million signing bonus that was contingent on him committing to baseball within five years. When Samardzija did commit to baseball after his final season of football at Notre Dame and passed on the 2007 NFL Draft, the Cubs gave their young pitcher a new $10 million contract even though he was yet to appear in the majors.

This winter, Samardzija was a free agent for the first time and signed a five-year, $90 million, fully guaranteed contract with the San Francisco Giants. This will push his career earnings to a minimum of $127.7 million even though he has appeared in just one All-Star Game and has never been considered a dominant pitcher.

Dwayne Bowe has been a Pro Bowler and at times has been one of the better wide receivers in football. Ted Ginn Jr. is a journeyman receiver who has played well at times. Robert Meachem last appeared in the NFL in 2014. Samardzija has more guaranteed career earnings than these three combined ($102.8M).