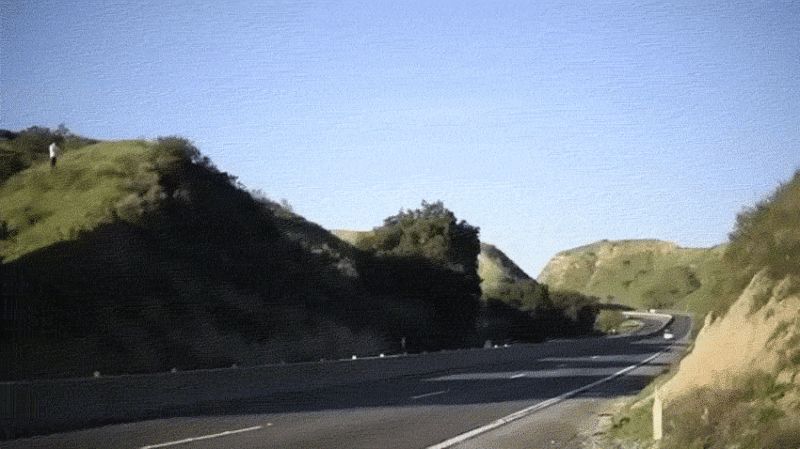 It was awfully hard not to be impressed by 24-year old motocross biker Kyle Katsandris, who wowed the internet (the police, not so much) by jumping over the 60 freeway in Riverside County, California last month. Unfortunately, Katsandris pulled another jump stunt this weekend, and it didn’t go well. At all.

This past Saturday, a stunt, equally daring and stupid, happened over the 60 freeway in Riverside…Read more Read more

The Ventura County Star reports that authorities have confirmed a motorcycle rider who was critically injured trying to jump some railroad tracks in Simi Valley on Sunday was, in fact, Katsandris.

The exact details of this jump aren’t known, although the newspaper notes it happened on private property around 3 p.m. Sunday. After a crash, Katsandris was taken to an area hospital in critical condition; police do not anticipate filing any charges.

A police commander told the LA Times that the stunt may have involved a moving train, but details are scant. It’s not clear if any video exists of the stunt attempt. But friends told the paper that when he recovers, he’ll be back to it again:

Kenny Dawkins, a friend of Katsandris’, said the media has made the motocross rider appear as though he was “some kind of irresponsible outlaw who is risking the lives of others while attempting his jumps.”

“Truth is, the only person who’s life is at risk is Kats himself, said Dawkins, who prints and makes shirts for Katsandris.

He said Katsandris is a skilled motocross rider, but “sometimes even the best riders have accidents, and that’s what happened Sunday to Kats.”

“Kats is a tough kid and he will recover from these injuries and be back to doing what he lives to do: free ride,” Dawkins said.

I hope he knows when to call it quits.

What The Hell Is Even Happening In This Motorcycle Crash Video?