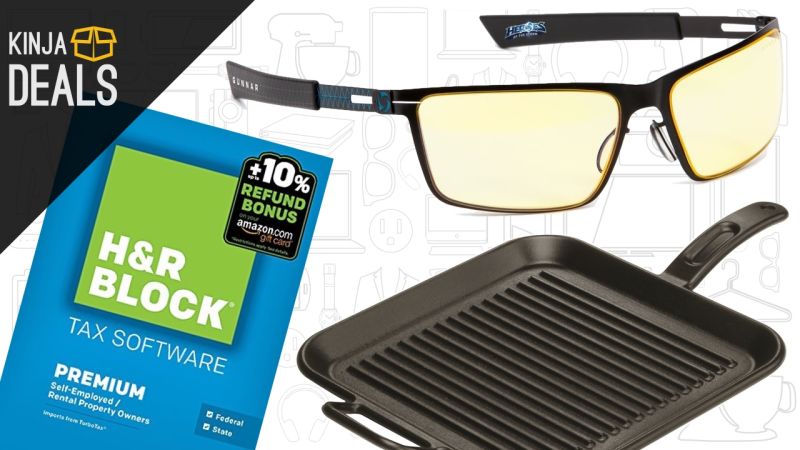 Gunnar glasses, tax software, and a Lodge grill pan kick off Saturday’s best deals. Bookmark Kinja Deals and follow us on Twitter to never miss a deal. Commerce Content is independent of Editorial and Advertising, and if you buy something through our posts, we may get a small share of the sale. Click here to learn more.

If you still haven’t filed your taxes, Amazon’s offering the biggest discounts of the season on H&R Block tax software, today only. H&R Block even allows you to take $100 increments of your tax refund as gift cards to Amazon, restaurants, and more, with a 10% bonus thrown on top. [H&R Block Tax Software Gold Box Deal]

While Gunnar glasses are marketed towards gamers, they can be effective at reducing eyestrain for anyone that spends their day staring at a screen. The problem is that they’re typically pretty expensive, and rarely go on sale. Today only though, Amazon’s got a handful of options on sale starting at $40. [Up to 60% off Gunnar Gaming Glasses]

Everyone with a kitchen should own a Lodge cast iron skillet, but this grill pan certainly has its uses as well. [Lodge Pro-Logic Pre-Seasoned Cast Iron Square Grill Pan, 12-inch, $27]

1048 purchased by readers•Gawker Media may get a commission
$27.19
Buy Now
Amazon

Range extenders can’t work miracles, but if a corner of your house just doesn’t quite get acceptable Wi-Fi reception, this little gadget can probably do enough to help. [TP-LINK AC750 Dual Band Wi-Fi Range Extender, $35]

205 purchased by readers•Gawker Media may get a commission
$34.99
Buy Now
Amazon

It’s not from a brand you’ve probably heard of, but this is the best price we’ve ever seen on a 30+ ounce, vacuum insulated water bottle. I own something similar, and it’ll keep ice frozen for hours on end, even in the Texas heat. [Fnova 35 oz Insulated Stainless Steel Water Bottle, $18 with code 4V4RMWPH]

Gawker Media may get a commission
$29.99
Buy Now
Amazon

As long as you don’t mind buying a refurb, this is probably the best Xbox One deal we’ve ever seen. You even get a Kinect! [Refurb Xbox One Console with Kinect and Four Games, $305]

Here are the best unreleased and unauthorized games you can play on your Microsoft Xbox One: Read more Read more

Sphero’s remote-controlled BB-8 droid was one of the coolest toys ever made when it first came out, and it’s stillimproving to this day! Today on eBay, you can buy your own for 130 portions dollars, or $20 less than usual. [Sphero BB-8, $130]

For the past 38 years there hasn’t been a robot more loved by fans than Star Wars’ R2-D2. But that… Read more Read more

At CES back in January, Sphero gave us an early look at its upcoming wearable that allows… Read more Read more

You played with it for hours on end after it was first released, but by the time The Force Awakens… Read more Read more

While there are obviously cheaper ways to shave, this $3 discount on a Gillette Fusion Proglide might be tempting if you want to take the infamous Flexball out for a spin. You even get two razor refills in the package, which Gillette claims are good for a month of shaving each. [Gillette Fusion Proglide, $7. Clip the $3 coupon]

381 purchased by readers•Gawker Media may get a commission
$10.59
Buy Now
Amazon

Mpow’s Swift Bluetooth headphones shot up the sales charts in 2015, but their new Swallow line adds a sleek design and active noise cancellation to the mix. The best part: You can still get them for under $30. [Mpow Swallow Wireless Bluetooth 4.1 Noise Canceling Sports Headphones, $26 with code Z3F7MDAJ]

1280 purchased by readers•Gawker Media may get a commission
$35.99
Buy Now
Amazon

This well-reviewed 55″4K Samsung TV has all the smart apps you could want, plus a price tag that’s $100 cheaper than Black Friday. If you just got your tax refund, I can think of much worse things to spend it on. [Samsung UN55JU6400 55-inch 4K Ultra HD Smart LED TV, $700]

Anytime you can get an 8-pack of Panasonic’s class-leading Eneloop AA rechargeable batteries for under $20, I recommend you take advantage. [Eneloop AA 8-Pack, $19]

8131 purchased by readers•Gawker Media may get a commission
$21.28
Buy Now
Amazon

If you need a charger, this 4-pack includes one for $16, which is its usual price. You might also want to pick up some C and D spacers to get even more use out of your AAs.

Stick-anywhere motion-sensing night lights have been incredibly popular over the last year, but they don’t usually make an effort to be aesthetically pleasing. Not so with this $10 sconce from OxyLED. Maybe it’s not your style, but at least it’s trying to look nice. [OxyLED Luxury Aluminum Stick-Anywhere Motion Sensor LED Wall Sconce Night Light, $10 with code UF2W93EJ]

1489 purchased by readers•Gawker Media may get a commission
$14.99
Buy Now
Amazon

Apple device owners know that you can never own too many Lightning cables, and $8 for a 2-pack is about as good a deal as we ever see on them. [2-Pack RAVPower Lightning Cables, $8 with code NM3K582E]

4351 purchased by readers•Gawker Media may get a commission
$14.99
Buy Now
Amazon

For a limited time, Amazon will give you a $25 account credit when you spend $50 on eligible “luxury” beauty and grooming supplies. Included items run the spectrum from shaving gear to lotions to makeup, and that’s just for starters, so chances are, you won’t have any trouble filling your cart. Just be sure to use promo code LUX25BACK at checkout to get the account credit. [$25 Amazon account credit with $50 luxury grooming purchase]

Commerce Content is independent of Editorial and Advertising, and if you buy something through our posts, we may get a small share of the sale. Click here to learn more, and don’t forget to sign up for our email newsletter. We want your feedback.